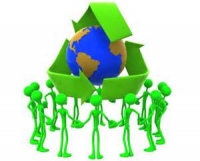 “The Pope has opened the windows and doors of the post-Second Vatican Council Catholic Church to the wonderful world that it once mistakenly viewed as a place of darkness needing the light of Christendom.”

Breaking News: The Vatican Press Office just released a statement concerning the Vatican Plan for a New One World Order Morality based on the threat of Climate Change and the mandatory conservation of the Earth. This papal document will be revealing the indisputable science which shows the detrimental impact human beings have made on the eco system. Not only irreparable damage to the environment but, also the cruelty of capitalistic unfair disparity in the distribution of goods, education and the land practices humans exploit and invest in. A new economy is being designed to better meet the needs of the marginalized poor who want jobs and a better opportunity for social development but, never seem to get it. It has been noted that the Holy Father has been saying, “The poor you will not always have among us”. Plans to incorporate an additional hermeneutic for a new more ecumenical morality code for sharing the earth are being drawn up. Since this new morality’s central focus is the planet Earth there will be an emphasis placed on the ecumenical management of social justice through science, technology and democracy. These new ideas are a reflection and refinement of the old Marxian axiom: “From each according to his ability, to each according to his need”.

Heading up the morality questions will be Cardinal Gerhard Ludwig Müller prefect of the Congregation for the Doctrine of the Faith. Assisting him will be his longtime associate and mentor Fr.Gustavo Gutiérrez, the “father” of Latin-American liberation theology, with whom he has a long and close friendship. Other valuable population contributions will be directed from the Bill and Melinda Gates Foundation.

Pope Francis has made every effort not to offend the sentiments of contradicting views but, there are consequences in the form of fines, imprisonments and excommunications for those conservative capitalist traditionalists who obstinately refuse to observe these new internationally approved ecological and economical mandates. In cooperation with the United Nations and that of The Hague World Court the Vatican wishes to express its ecclesial approbation in these matters concerning the human genus population and their particular required behavioral modification role as they interact among the other life forms of the planet Earth.

The Holy Father has made no secret of his desire to meet the world where it is rather than try and convert it with a nonsensical proselytization. Man’s Church on Earth must be educated within that structure to respect the Earth as he would his mother and learn to take his place just as all creatures do subject to the rules of scientifically proven Darwinian neo-naturalism. Replacing the theory of divine providence with practical science and rational revolutionary thought the Pope has opened the windows and doors of the post-Second Vatican Council Catholic Church to the wonderful world that it once mistakenly viewed as a place of darkness needing the light of Christendom.

Special April 22nd. Ecumenical Earth Day observances are planned for planting trees and roadside litter cleaning and special privileges for hours of devotional ecological services will be given. Planet abuse will result in penalties paid in the form of penitential disciplines such as going without food, electricity or cellphone service for an extended period of time. Since it has been determined that all men commit planet abuse sins everyone will be disciplined with greater or lesser penances depending on their severity and for some, incarcerating and reeducation facilities will be provided by the United Nations. Since the project is universal and ecumenical even atheists will be subject to making periotic mandatory confessions and all confessors will be required to take a special class of instructions and obtain a license issued by The Hague. All in all the world is sure to be a better place and a lot more egalitarian. All the experts working on the project assure me that the magic of enforceable ecumenical ecology is the best forward-looking plan for maintaining strict social order.  Domestic and other non-related ecological social issues will be governed by Extraordinary Synods both ecclesial and secular such as the Synod on the Family which will securely fit the Catholic Church into the modern world. The Church, under the leadership of Pope Francis, has surely entered the 21st. Century and finally, the Church has been made to realize that man is the problem and how much better off the world would be without him.

"I don't know if it is all (man's fault) but the majority is, for the most part, it is man who continuously slaps down nature," he said. (Pope Francis)

Published in A-CNN
back to top
Read 3937 times
Tweet