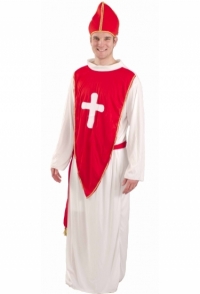 A-CNN Special Report: In the continuing efforts to erase every vestige of the Pre-Vatican II Church, Ima Cardinal Hairatik addressed an assembly of the newly-formed World Homogenous Association To Elevate Various Erroneous Religions (W.H.A.T.E.V.E.R) to update what was once known as the Seven Deadly Sins in the Rigid Commands (R.C.) Church: pride, covetousness, impurity, envy, gluttony, anger and sloth. After very careful study, it was determined that these so-called vices, believed to be the root of many sins, are merely human weaknesses and frailties of which we are not to be judgmental. However, Cardinal Hairatik presented a list of Crimes Against Humanity and Nature, which will supersede the antiquated list of Deadly Sins.

The following are excerpts from Cardinal Hairatik’s address to WHATEVER outlining the catholic church of New Option’s Crimes Against Humanity and Nature:

1. Not Being Poor – “Blessed are the poor” means that anyone who is not poor is not blessed. Therefore, it is the obligation of those who are not poor to give to those who are poor until they are no longer poor. The new “not poor” must now take care of the “new” poor who had generously taken them out of poverty. This will create a continuous loving cycle of “give and take” which should all work out in the end. Poverty, of course, does not apply to certain mega-rich who must maintain their power in order to take their place in the New World Order.

2.  Proselytizing – This is a form of elitism and intolerance. It is boasting that you have something that others should have in order to get to Heaven. This is nonsense! The R. C. Church claimed to be the only way to salvation. Since the N.O. Church admits we only have blessed bread and wine, we are now the same as our Protestant brethren. We all know, thanks to the Bishop of Rome, that God is not Catholic! Therefore, non-Christian churches must also be valued for their holiness and respected as other roads which lead to salvation. This crime will soon be a thing of the past because when we are through there will be nothing left to proselytize about.

3. Irresponsible Parenthood- The N.O. church will forever uphold Pope Paul VI’s encyclical “Humanae Vitae”. We have no choice. He was a post-conciliar pope and the post-conciliar church beatified him. However, this does not mean that catholics must “breed like rabbits.” Surely, there are other ways to prevent over-population and contributing to the poverty situation which puts undo strain on the environment. Large Catholic families have always been the object of ridicule and mockery. It’s your choice! Just don’t look to the N.O. hierarchy to come to your defense.

4.  Leaving a Carbon Footprint – It is an inconvenient truth that the Creator of Heaven and Earth did not foresee or make accommodations for an overpopulated planet. Therefore, it is our individual responsibility to be aware of our Carbon Footprint by conserving energy and taking every precaution to protect the environment. We must examine our conscience and ask the crucial questions: What kind of car do I drive? Am I polluting the environment by using bug spray? Do I ask for paper instead of plastic at the supermarket? It is a scientifically proven theory that carbon footprints lead to global warming. Natural disasters are not natural. They are our own fault. Think GREEN!!!

5. Intolerance --In the archaic past, it was believed that there were certain relationships, behaviors, gender confusions, and so-called depravities which were considered unnatural, disordered and sometimes even perverted. This total lack of tolerance, brotherly love and humility can no longer be accepted in the Civilization of Love which flies the banner: “Live and Let Live.”

6. It is with regret that the last “Crime Against Humanity and Nature” must fall under the unfortunate label “Deadly Sin”. This, of course, is any desire, longing, leaning, nostalgia, or yearning for the Traditions of the pre-Vatican II R.C. Church. If this Deadly Sin is detected in a member of the clergy, he will be subject to a forced sabbatical, publicly chastised, ridiculed and/or placed under house arrest. After a period of intense psychological counseling, if rehabilitation is not achieved, he will be silenced, face excommunication, and possibly exiled beyond reach.  Celebrating what was previously known as the Holy Sacrifice of the Mass or expressing any interest in this ancient liturgy is anathema. When these renegade, rebellious priests are eliminated, the faithful who share these longings will be scattered. The triumph of the New (World) Order Church will be complete.

Ima Cardinal Hairatik concluded his address to WHATEVER by offering words of encouragement to those who are eager for the final conquest. “Be patient. The safest and surest road to victory is the gradual one!”

[Comment Guidelines - Click to view]
The Remnant values the comments and input of our visitors. It’s no secret, however, that trolls exist, and trolls can do a lot of damage to a brand. Therefore, our comments are heavily monitored 24/7 by Remnant moderators around the country.  They have been instructed to remove demeaning, hostile, needlessly combative, racist, Christophobic comments, and streams not related to the storyline. Multiple comments from one person under a story are also discouraged. Capitalized sentences or comments will be removed (Internet shouting).
The Remnant comments sections are not designed for frequent personal blogging, on-going debates or theological or other disputes between commenters. Please understand that we pay our writers to defend The Remnant’s editorial positions. We thus acknowledge no moral obligation whatsoever to allow anyone and everyone to try to undermine our editorial policy and create a general nuisance on our website.  Therefore, Remnant moderators reserve the right to edit or remove comments, and comments do not necessarily represent the views of The Remnant.
back to top
Read 4543 times Last modified on Saturday, January 24, 2015
Tweet
More in this category: « New Vatican Featured Environmental Plan for The New One World Order Morality Vatican Introduces People’s Liturgical Buffet, Self Service Communion Ministry »