A-CNN Breaking Story: The Catholic Church in its ecumenical wisdom and neo-exegesis tradition with and by the authority expressly granted by the Second Vatican Council document proclamation of SACROSANCTUM CONCILIUM, DECREES:

50. The rite of the Mass is to be revised in such a way that the intrinsic nature and purpose of its several parts, as well as the connection between them, may be more clearly manifested, and that devout and active participation by the faithful may be more easily achieved.

For this purpose the rites are to be simplified, due care being taken to preserve their substance. Parts which with the passage of time came to be duplicated, or were added with little advantage, are to be omitted. Other parts which suffered loss through accidents of history are to be restored to the vigor they had in the days of the holy Fathers, as may seem useful or necessary.

Revised Praxis: To be granted to achieve the more active participation in the Novus Ordo Mass. The table of the Eucharist is to be extended and or supplemented with auxiliary tables in such a way as to provide for the new useful and necessary self-service ministry and for the restoration of the People’s Liturgical Buffet Eucharist Distribution Table. 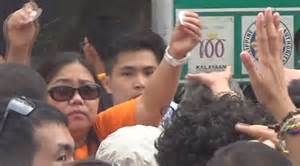 In response to the many comments and suggestions following the Holy Father’s visit to Manila the following changes have been made: As to the requirements and logistics of modern out-of-doors and in some cases indoors large liturgical gatherings but, not to the exclusion of intimate liturgical gatherings; the practical and expedient distribution of the Eucharist can and will be revised to include self-service at the supper table of the Lord. Since passing bread hosts from one hand to another can at times be difficult, unsanitary and time consuming the addition of the liturgical self-service Eucharistic Buffet Table or even multiple self-service Eucharist Buffet Tables will supplement or replace the superfluous Extraordinary Eucharistic Ministers. The Eucharistic Minister program will however, be augmented and modified to include training for the additional security duties now required for crowd control. The training will be supplied by the Vatican Karate Team and qualifying Extraordinary Ministers will be introduced as Extra-Extraordinary Mob Monitors when necessary and useful.

Other progressive suggestions such as adding additional food items to the wine and bread menu were discussed and notated by Cardinal Izzy Alunatick, the Prefect for the Congregation of the People’s Self-Service Buffet Liturgies. Cardinal Izzy is considering a trial experiment with a supplement of cheese slices for those who are gluten intolerant. In the ongoing effort established by Pope Francis to meet the people at their sheep-smelling comfort zone without intimating protocols, dress codes or restrictive dietary disciplines the Congregation of the People’s Self-Serving Buffet Liturgies is eliminating all abstinence and fasting requirements which might harm or otherwise damage the image or integrity of the community’s self-esteem.

The Holy Father’s priorities concerning biodegradable ecology-safe recyclables has also been researched and the People’s Buffet Self-Serving Liturgical Eucharist Tables will therefore be constructed of only the finest recycled eco-friendly materials. There is also the eco-alarming concern for Climate Change Carbon Emissions which can potentially generate from large gatherings of humans with their use of internal combustion vehicles and BBQ’s. These and other earth-friendly questions including those of global self-sustaining family planning and rabbit-control via NFP will be discussed and resolved at the Extraordinary Green Synod on the Ecology scheduled to coincide with the Vatican’s celebration of the Holy Mother Earth Feast Day. We have been told that expert dieticians and product researchers from Mc Donald’s fast food industries have volunteered to help with the details of the Synodal project.

Some resistance is expected from the more rigid traditionalists but that problem has been greatly reduced with the successful Bergoglian Vatican program to depose and eliminate all the neo-pelagian and promethean conservative Bishops and Cardinals. Also, no further tolerance is to be given to the words: sacrifice, penitential, sin or Hell; they have been eliminated in the revised liturgies. Hereafter, whenever possible, the words mercy, love and fun will be inserted without any restrictions in all liturgical genre. As an added attraction for the youth, cell phone and Wi Fi service will be available throughout the entire Novus Ordo Mass and provisions for Youth Ministry Liturgical Dance contests will be introduced. As always the pontificate wishes each and all a nice day. Just remember: we do not judge.

[Comment Guidelines - Click to view]
The Remnant values the comments and input of our visitors. It’s no secret, however, that trolls exist, and trolls can do a lot of damage to a brand. Therefore, our comments are heavily monitored 24/7 by Remnant moderators around the country.  They have been instructed to remove demeaning, hostile, needlessly combative, racist, Christophobic comments, and streams not related to the storyline. Multiple comments from one person under a story are also discouraged. Capitalized sentences or comments will be removed (Internet shouting).
The Remnant comments sections are not designed for frequent personal blogging, on-going debates or theological or other disputes between commenters. Please understand that we pay our writers to defend The Remnant’s editorial positions. We thus acknowledge no moral obligation whatsoever to allow anyone and everyone to try to undermine our editorial policy and create a general nuisance on our website.  Therefore, Remnant moderators reserve the right to edit or remove comments, and comments do not necessarily represent the views of The Remnant.
back to top
Read 8126 times Last modified on Friday, January 30, 2015
Tweet