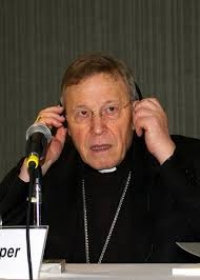 No Sacraments for Adulterers (Can You Hear Us, Cardinal Kasper?)

The other day, a bishop in Algeria, the former head of the Dominican Order in France, Bishop Jean-Paul Vesco, on the website of the weekly magazine La Vie, made defense of the Kasper plan, to “pardon” those who have left their marriage, taken a civil “divorce” and entered into a second adulterous connection. The Catholic world is in turmoil over the possibility that this apparently common practice in Germany will be allowed formally throughout the world, and some powerful voices thunder against it, with the Pope, except for a few brief words of warm praise in the beginning, still silent.

Now we have the “pardon” instead of forgiveness of sins, covering instead of deleting them. Obviously, for the simple reason that repentance is difficult, too difficult for ordinary people.

This shocking and depressing atmosphere is the backdrop for the launch of the most feared Extraordinary Synod for the Family, which begins in Rome this week. And as the bishops of the world line up on both sides of the "debate" it has started to seem more as a state of open war in the Church.

Bishop Vesco said in an interview, “I firmly believe that it is theologically possible to assert the indissolubility of real conjugal love and the uniqueness of sacramental marriage, and at the same time the possibility of pardon in the event that lifelong marriage – one of life’s most beautiful but perilous adventures – fails.”

This statement is an almost exact repetition of Cardinal Kasper to the consistory in February, in which he caused an uproar among the cardinals. Kasper himself many times has also said that the actual teaching, in fact, cannot be changed. They are the words of our Lord and Saviour, after all. But perhaps, he suggests, the practice of the Church, “pastorally” can be customized. We can “pardon” those who do not meet the requirements of the moral law. After an appropriate "period of penance," we can just “let it slide” and they can be admitted to the sacrament of Holy Communion and the Church can just forget about it. The parish priest and fellow parishioners can simply agree not to talk about it anymore, like an English garden party.

We had several cardinals and bishops say in the last few months, that it is "impossible" that Catholic teaching could be changed and that believers who fear such an unimaginable thing have nothing to fear from the Synod, that everyone will please calm down and go back to their favorite TV shows ... nothing to see, as say our American friends. Beware! Beware! These people tell only half the story.

This bishop in Algeria comes clean in this little game to tell the world, “By virtue of the indissoluble character of the first bond over which the Church has no authority, the Magisterium today considers the state of life of the ‘divorced and remarried’ comparable to obstinately persisting in a state of grave sin (adultery) and they are not admitted to Holy Communion (Article 915 of the Code of Canon Law).”

And this “notion” of “obstinately persisting” in that state makes it not only impossible to receive Holy Communion, but to be absolved, since they have no intention of altering their lifestyles and living chastely. “There can be no sacramental pardon without a firm determination to renounce one’s sin,” the bishop accurately tells us.

One would think that it is an open and shut case. But here the new Kasperian doctrine comes of “pardon”: “However, this notion of obstinate persistence in a state of grave sin has of course no relation to the life of so many of these couples, who put their hearts into (re) building a real, fruitful conjugal life day after day.”

Ah. They do not mean to sin. Are not aware of the sin. If you sin, and don’t know, is it really sin, after all? No! No! No! They’re really just good people who do not have the intention to go wrong. Give them a pass, a “pardon”. Let it go. Why are you so mean, anyway?

“Their life has nothing to do with the disorder and duplicity of an adulterous life, which presupposes a simultaneous relationship with two people, which is not the case here.”

It’s okay, because it is in the open. No one will sneak around. Sin is sneaking around and doing it behind people's backs. The divorce is over, it's in the past. What led to this is irrelevant and now everyone has gone on with life (including children from the previous marriage, one would think, but that is not mentioned.)

The bishop wants us "to distinguish between uniqueness and indissolubility" and between "instant offense and the action continues."

It's not really adultery, anyway: “Someone who has experienced the failure of a marriage and is ready to assume part of the responsibility, who has since rebuilt his or her life and lives on a daily basis within a relationship of fidelity, cannot see this new life as an adulterous situation. In real life, adultery means maintaining a relationship with two people at the same time. That is not the life of those who divorce and remarry.”

But is the use of the word “pardon” that is giving the game away. In Catholic theology, “pardon” in the sense of a human decision to just “give it a pass,” to decide to stop talking about it like at that nice English tea party, does not exist. In fact, the idea of “pardon” instead of forgiveness of sins is, depending on how far you take its logic, essentially Calvinist or materialist in nature. It is, in fact, a declaration of atheism

Catholicism teaches that God forgives sins. As humans, we have a problem to accept this amazing doctrine once we know what it means, because we know that an act committed, good or evil, is committed forever. We release our acts into eternity and may never call them back, as everyone who has sent an angry email to a boss or girlfriend knows. Sin is a cosmic event, one that no man has no power to delete, to forgive. The idea of a God who is so powerful that He can actually reverse this act, may, in a sense, reach into the structure of space and time and pluck it out of reality, erasing it forever, is something we have a very difficult time accepting.

We say that only God has the power to forgive sins, and understand what that means, we are left mouths agape at the possibility. But we cannot say that He “pardons” in the sense the word with Kasper and his followers (both above his station in the Church and below). God does not just shrug and say, "Well, I guess I just can get past it..." God’s forgiveness removes the sin, it ‘”deletes” sin, “et omnes iniquitates meas dele...” and we are made into new beings, “whiter than snow.”

Apparently even Kasperites were aware that this is something we can not do. And so, in a manifestation of their inability to believe in this supremely and astoundingly powerful God, in their atheistic materialism, they propose something that humans are, just barely, capable of instead.

In fact, this business of “pardon” reminds me of the Calvinist notion that we are not really healed from sin, that God “covers” it with grace. In Calvinist "forgiveness" we are left essentially unchanged. (His very apt analogy for this horrible and wicked idea, is that the "saved" are like manure pile covered in a layer of snow, and will remain in this state for all eternity. Nice isn't it?). This is an essentially materialist view, that God is not strong enough to remove or to erase our sins, so that we are stuck forever with sin and can never have our hearts changed from one of stone to a heart of flesh. It denies God's ability to remake us into new beings and miraculously heal the real problem.

Kasper himself recently stated that "heroic virtue" is nice and all, if you can find it, but this is not something for the "average Christian" to strive for. A doctrine I cannot help but find deeply depressing.

Kasper’s proposal is, in effect, atheistic, and assumes that sin is something we ourselves, in the absence of a God powerful enough to “blot out” sin forever and remake us, simply have to deal with as best we can. In Kasper’s depressing universe, God does not step in and act, He does not give the grace to persevere either in a difficult marriage, or for sexual constancy after the marriage “fails”. With a few exceptional and essentially inexplicable, freakish cases of rare “heroic virtue” (that comes from no supernatural source) we are merely animals, helpless under the spell of our carnal impulses.

But I do not want the Bishops of the Synod to change either Church doctrine or practice. To do so would be to try to impose these awful, materialistic, atheistic ideas into the life of the Church. It would be putting out the light of both faith and reason, and shrugging helplessly at sin.

I don’t want to have my sins “pardoned.” I don’t want to remain in them, and remain the same kind of creature that sinned in the first place, because it means that I am all the more likely to sin again and again and never stop. I know full well that I have no power on my own to stop myself from sinning, and I most desperately need the tremendous, unimaginable power of God to “blot out” my sins, to erase them from reality entirely and utterly remake me into a new kind of being.

Here is the real reason this proposal Kasper is so outrageous in this cosmic level, beyond the terrible damage done to the Church and for the people, to teach them, that the breaking of the marriage vow is not a big deal. The attempt to impose this dead, materialistic universe, a world in which there may be a "god" of some sort, but who does not really care about sin or really want to make us better. Or have the power to do so.

Published in Remnant Articles
back to top
Tweet
More in this category: « On the "Schism" of Archbishop Lefebvre (Evelyn Waugh's Son Got It Exactly Right) Deconstructing Modernism: Defending Pascendi in 1908: Part IV »