Written by  Christopher A. Ferrara
Rate this item
(113 votes) 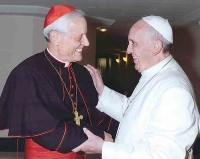 By way of the comments of others, suffice it to note, as reported by Vatican Radio, that no less than the President of the Polish Episcopal Conference, Archbishop Stanislaw Gądecki, “did not hesitate to say that this documentdeparts from the teaching of John Paul II [meaning the entire Magisterium regarding marriage and procreation], and even that in it can be noticed traces of the anti-marriage ideology. According to Archbishop Gądecki, this text also highlights the lack of a clear vision for the synodal assembly.”

I must disagree with the final sentence of the report. The Synod had a very clear vision: nullification of the Church’s censures of sexual immorality of all kinds, including sodomy, and with this nothing less than an effective decommissioning of the Church as moral preceptor of humanity. This is what the aged Modernist cabal Pope Francis put in charge of this sham of a Synod has in view.

I say sham because the entire event was nothing but elaborate camouflage for the advancement of a predetermined position: that the Church would be seen to adapt herself, at long last, to the “reality” of “modern” sexual relations and conjugal arrangements—formerly known as sins of the flesh—and thereby complete her adaptation to “the modern world” in keeping with the conciliar “opening to the world.” As the alarmed President of the Polish Episcopal Conference put it, the Secret Synod’s relatio “should be an incentive to fidelity, family values, but instead seems to accept everything as it is.” Or, as I put it four days ago, the real theme of the Secret Synod is: “Let us compromise on everything.”

In an application of Vatican II as preposterous as it is diabolical, the Secret Synod proposes to legitimate civil marriage, cohabitation, adultery, and even homosexual “unions” by focusing on “constructive elements” in these evils in the same manner as the Council, in Lumen gentium, purported to find “many elements of sanctification and truth” in non-Catholic religions. The Secret Synod suggests, in all seriousness, that just as there are “positive elements in other religions” so must the Church now recognize “seeds of the Word” at work in “cohabitation, civil marriages and divorced and remarried persons.” Hence, says the Secret Synod, “a new dimension of today’s family pastoral [sic] consists in accepting the reality of civil marriage and cohabitation,” which are now to be viewed as “a germ to be accompanied in development toward the sacrament of marriage…” As the Secret Synod would have it, therefore, the concept of living in sin would simply be abolished. Rather, “[a] new sensitivity in today’s pastoral [sic] consists in grasping the positive reality in civil weddings and, having pointed out our differences [!], in cohabitation.”

Read the previous paragraph again if you don’t believe it.

Cardinal Kasper’s proposal to admit public adulterers to Holy Communion in “some” cases—Pope Francis’s proposal from the very beginning, let us face it—is also enshrined in this wicked document. “It is not wise to think of unique solutions or those inspired by a logic of ‘all or nothing,” says the Secret Synod before noting that “some argued in favor of the present regulations because of their theological foundation,” while “others were in favor of a greater opening on precise conditions…” Then the bomb is detonated: “For some, partaking of the sacraments might occur were it preceded by a penitential path—under the responsibility of the diocesan bishop—and with a clear undertaking in favor of the children. This would not be a general possibility, but the fruit of a discernment applied on a case-by-case basis, according to the law of gradualness…”

Yes, the Secret Synod has invented a new moral law: “the law of gradualness,” a perversion of the legitimate principle that spiritual progress is gradual, not the bare avoidance of sin, the break from which must be decisive before spiritual progress can be made (Cf. John Paul II, Familiaris Consortio 34 and Vademecum for Confessors, Pontifical Council for Family [1997] 3:9) . With the help of this abuse of terminology, a mere verbal trick, objective mortal sinners would be allowed to receive the Blessed Sacrament without a firm purpose of amendment so long as they could be said to be moving “gradually” toward acceptance of the Church’s moral teaching—in other words, thinking it over while they continue to commit precisely the same sins, receiving absolution and Holy Communion nonetheless. Here the entire moral edifice of the Church, the sanctity of the Blessed Sacrament, the integrity of Confession, and the Faith as a whole are under direct attack.

But the Secret Synod saved the worst for last. In a section entitled “Welcoming Homosexual Persons,” the Modernist coven responsible for this travesty gives a diabolical nod to sodomy:

“Homosexuals have gifts and qualities to offer to the Christian community: are we capable of welcoming these people, guaranteeing to them a fraternal space in our communities? Often they wish to encounter a Church that offers them a welcoming home. Are our communities capable of providing that, accepting and valuing their sexual orientation, without compromising Catholic doctrine on the family and matrimony?”

How does one “accept and value” the intrinsic disorder of homosexuality without compromising Catholic doctrine? One does not, of course. One simply accepts that it is no longer an intrinsic disorder and that the Church was wrong ever to say so. That is the aim of the Secret Synod. But there is more:

“Without denying the moral problems connected to homosexual unions it has to be noted that there are cases in which mutual aid to the point of sacrifice constitutes a precious support in the life of the partners. Furthermore, the Church pays special attention to the children who live with couples of the same sex, emphasizing that the needs and rights of the little ones must always be given priority.”

Notice that the Secret Synod does not stop at characterizing sodomitical unions as “precious support”—oh, but only sometimes! Hiding a vice that cries out to heaven for retribution behind a vague reference to “moral problems,” it also simply assumes that innocent children will be raised by sodomite “couples” and that the Church will now accept this development while it tends to “the needs and rights of the little ones”—as if the rights of children did not include, first and foremost, their natural right not to be subjected to the horror of being adopted by sodomites. The Secret Synod has effectively dispensed with the entire teaching of the Church against homosexual conduct in general and “gay marriage” and “gay adoption” in particular, which Cardinal Alfonso López Trujillo, speaking during the reign of Pope Benedict, called “a crime which represents the destruction of the world.”

The document just produced by the Secret Synod is another crime that represents the destruction of the world, in which members of the upper hierarchy are now openly participating. Even though, of course, the judgments of the Synod will bind no one—this being yet another addition to the pseudo-Magisterium of the post-conciliar epoch—the damage it has inflicted is already catastrophic. In effect, the Secret Synod has proposed, and the whole world will now hail incessantly, a practical abolition of the consequences of sin, including even habitual sodomy, with respect to standing in the Church. Indeed, the relatio dispenses with the very concept of the impediment of mortal sin in favor of an unheard-of continuum of moral behavior representing what the Secret Synod likens to the “levels of communion formulated by Vatican II” in its view of Protestants. Under the newly invented “law of graduality,” everyone on the continuum would have access to the Sacraments without regard to the objective immorality of his conduct. The pernicious nebulosity of Vatican II now finds its ultimate application: all sinners are more or less confirmed in their sins in the name of “mercy,” just as all of the Protestant sects are more or less confirmed in their theological errors. There is no need to elaborate the apocalyptic implications.

In yet another of his bizarre sermons, clearly in support of this repulsive document, Francis today introduced us to a new deity: “the God of surprises.” According to Francis, “God is always new; he never denies himself, he never says that what he had said is wrong, but he always surprises us.” Always! In case we failed to get the message, Francis reprised yet again his by now obsessive theme that Catholics committed to defending the Church’s traditional teaching and discipline against compromise are like the Pharisees: “The scholars of the law had forgotten how many times God surprised his people, like when he freed them from slavery in Egypt… They were too wrapped up in their perfect system of laws…. Am I attached to my things, my ideas. Am I closed? Am I able to understand the signs of the times and be faithful to the voice of the Lord that is manifested in them?”

Francis would have us believe that the Secret Synod speaks with the voice of the Lord; and with disgusting audacity and brazen blasphemy the drafters of this devilish piece of trash have dared to profess that they maintain “a fixed gaze on Jesus Christ, to pause in contemplation and in adoration of His Face.” But we know who this “God of surprises” really is. His name is legion, and that legion is at work in the Hall of the Secret Synod.

Four days ago I wrote: “the Secret Synod is in the grip of madness.” I never imagined that that assessment would border on an understatement. Even if the final document of the Secret Synod somehow retreats from what we have seen today, there is little doubt that we have entered into the time of the Great Apostasy foretold in Scripture. With a strange Pope in command of the Church and another claiming to be a Pope Emeritus for the first time in history, it seems only a miracle can deliver the Church from a situation she has never before witnessed. Our Lady of Fatima, intercede for us!

Published in Remnant Articles
back to top
Last modified on Tuesday, October 14, 2014
Tweet