A Tale of Two Popes: Which One Shall We Believe? 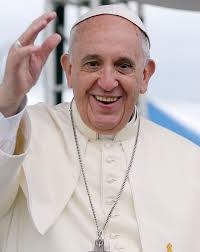 "The Mufti explained things very well to me, with such meekness, and using the Quran..."  - Pope Francis

“I went to Turkey as a pilgrim, not a tourist…when I entered the Mosque, I couldn’t say: ‘Now, I’m a tourist!’ No, it was completely religious. And I saw that wonder! The Mufti explained things very well to me, with such meekness, and using the Quran, which speaks of Mary and John the Baptist. He explained it all to me....At that moment I felt the need to pray. I asked him: ‘Shall we pray a little?’ To which her esponded: ‘Yes, yes’. I prayed for Turkey, for peace, for the Mufti, for everyone and for myself, as I need it… I prayed, sincerely....Most of all, I prayed for peace, and I said: ‘Lord, let’s put an end to these wars!’ Thus, it was a moment of sincere prayer.” …Pope Francis at his press conference on board the flight returning fromTurkey on November30, 2014.

“Certainly such attempts can nowise be approved by Catholics, founded as they are on that false opinion which considers all religions to be more or less good and praiseworthy, since they all in different ways manifest and signify that sense which is inborn in us all, and by which we are led to God and to the obedient acknowledgment of His rule. Not only are those who hold this opinion in error and deceived, but also in distorting the idea of true religion they reject it, and little by little, turn aside to naturalism and atheism, as it is called; from which it clearly follows that one who supports those who hold these theories and attempt to realize them, is altogether abandoning the divinely revealed religion.” …Pope Pius XI, Mortalium Animos

“Sharing our experience in carrying that cross, to expel the illness within our hearts,which embitters our life:i t is important that you do this in your meetings. Those that are Christian, with the Bible, and those that are Muslim, with the Quran. The faith that your parents instilled in you will always help you move on.” …Pope Francis, addressing immigrant Muslims in a Roman parish during the World Day of Migrants and Refugees on 19 January 2014 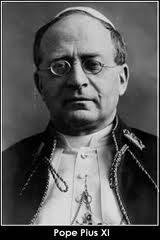 “They seem to have founded on that belief a hope that the nations, although they differ among themselves in certain religious matters, will without much difficulty come to agree as brethren in professing certain doctrines, which form as it were a common basis of the spiritual life. For which reason conventions, meetings and addresses are frequently arranged by these persons, at which a large number of listeners are present, and at which all without distinction are invited to join in the discussion, both infidels of every kind, and Christians, even those who have unhappily fallen away from Christ or who with obstinacy and pertinacity deny His divine nature and mission. Certainly such attempts can nowise be approved by Catholics, founded as they are on that false opinion which considers all religions to be more or less good and praiseworthy” …Pope Pius XI, Mortalium Animos

“I believe we are moving forward in our relations with the Orthodox; they have the sacraments and apostolic succession ... we are moving forward. What are we waiting for? For theologians to reach an agreement? That day will never come, I assure you, I'm skeptical. Theologians work well but remember what Athenagoras said to Paul VI: “Let's put the theologians on an island to discuss among themselves and we’ll just get on with things!”... We mustn't wait. Unity is a journey we have to take, but we need to do it together. This is spiritual ecumenism: praying together, working together.” …Pope Francis, during his press conference on the flight returning from Turkeyon November 30, 2014.

"All Christians, they add, should be as "one": for then they would be much more powerful in driving out the pest of irreligion, which like a serpent daily creeps further and becomes more widely spread, and prepares to rob the Gospel of its strength. These things and others that class of men who are known as pan-Christians continually repeat and amplify; and these men, so far from being quite few and scattered, have increased to the dimensions of an entire class, and have grouped themselves into widely spread societies, most of which are directed by non-Catholics, although they are imbued with varying doctrines concerning the things of faith. This undertaking is so actively promoted as in many places to win for itself the adhesion of a number of citizens, and it even takes possession of the minds of very many Catholics and allures them with the hope of bringing about such a union as would be agreeable to the desires of Holy Mother Church, who has indeed nothing more at heart than to recall her erring sons and to lead them back to her bosom. But in reality beneath these enticing words and blandishments lies hid a most grave error, by which the foundations of the Catholic faith are completely destroyed”…Pope Pius XI, Mortalium Animos

“To dialogue means to believe that the “other” has something worthwhile to say, and to entertain his or her point of view and  perspective. Engaging in dialogue does not mean renouncing our own ideas and traditions,but the claim that they alone are valid or absolute.”  Pope Francis, message for the 48th World Communications Day, “Communication at the Service of an Authentic Culture of Encounter,”June1, 2014 –Cfn>.9: 6

“Unity can only arise from one teaching authority, one law of belief and one faith of Christians. But We do know that from this it is an easy step to the neglect of religion or indifferentism and to modernism, as they call it. Those, who are unhappily infected with these errors, hold that dogmatic truth is not absolute but relative, that is, it agrees with the varying necessities of time and place and with the varying tendencies of the mind, since it is not contained in immutable revelation, but is capable of being accommodated to human life. …Pius XI, Mortalium Animos

[Comment Guidelines - Click to view]
The Remnant values the comments and input of our visitors. It’s no secret, however, that trolls exist, and trolls can do a lot of damage to a brand. Therefore, our comments are heavily monitored 24/7 by Remnant moderators around the country.  They have been instructed to remove demeaning, hostile, needlessly combative, racist, Christophobic comments, and streams not related to the storyline. Multiple comments from one person under a story are also discouraged. Capitalized sentences or comments will be removed (Internet shouting).
The Remnant comments sections are not designed for frequent personal blogging, on-going debates or theological or other disputes between commenters. Please understand that we pay our writers to defend The Remnant’s editorial positions. We thus acknowledge no moral obligation whatsoever to allow anyone and everyone to try to undermine our editorial policy and create a general nuisance on our website.  Therefore, Remnant moderators reserve the right to edit or remove comments, and comments do not necessarily represent the views of The Remnant.
back to top
Last modified on Friday, February 6, 2015
Tweet