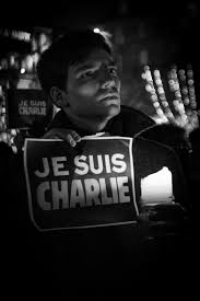 
Would the brilliant French poet, Charles Pierre Péguy, still compose these imaginings uttered by God about France? How would the poetry of the devout Péguy capture the Catholic faith in post-modern France? Surely, Péguy would notice the empty cathedrals, the greying congregation, and the apathy of baptized, but lapsed Catholics and the grim reality of Catholicism supplanted by secularism.

Will the terrorist massacres of Charlie Hebdo bring France back to its knees?

On January 11, 2015, over a million French marched through the streets of Paris, in protest against the Islamic terrorism and in support of the 17 murdered and 22 injured victims. Throughout the country, the French marched together arm in arm, along its own Via Dolorosa, mourning the brutality of terrorism.

The anger of the French was palpable in the March for Unity. As far as the eye could see, the streets of Paris were choked with marchers carrying Je suis Charlie signs, waving French flags, in support of the victims. Among the marchers winding through the streets of Paris, were French citizens carrying oversize pencils symbolizing the murdered cartoonists who sketched for the satirical magazine. It was an impressive demonstration of unity and solidarity for the victims of terrorism.

Oddly, in this once Catholic country, no symbols of Christianity were visible in the crowd. The words, Not Afraid were spelled out with lighted votive candles. Ironically, votive candles that once burned brightly in French cathedrals, now serve as the secular symbol of protest. Here, in France, where the prayerful pilgrimage was founded, is now replaced by a Mass March which ends not in a March to Mass at one of the 16 Notre Dame Cathedrals, but ends when the media turns off their cameras and coverage.

Secular Europe finds temporary salve for its psychic wounds and anger in mass marches in its capitals. In October 1997, 350,000 Belgians took to the streets of Brussels to protest their corrupt and incompetent justice system that allowed a known pedophile to abduct and rape 6 young girls and murder 4 of them. The impressive and massive White March with Belgians dressed in white, carrying white balloons for the innocence of the children stunned Europe. For a brief moment, the usually placid Belgians demanded that their government institute child protection laws and reforms. Yet, like most secular protest marches, nothing changed in Belgium. The incompetent government survived a no confidence vote. Children returned to their lowly and insignificant status and known pedophile murderers continued to abduct, rape and kill children despite the demands of the White Marchers.

Did you miss this one in the last issue of The Remnant?  To find out what else you missed, subscribe today!


Secularism reigns in the once Catholic Belgium, as does the “catholic” Belgian King, who in 2014 signed a euthanasia law for terminally ill children, the first of its kind in the world. So much for the White March and its demand for laws that protect lives of children!

After the Charlie Hebdo attack, French President Hollande declared that the Islamic jihadists have declared war on France. In the last year alone, Belgium, France, and Denmark experienced Islamic terror cells wreaking murder, mayhem, and brutal violence aimed at innocent and unsuspecting citizens. Jihad has been waged against Europe.

Will the grim prediction of the French novelist and essayist, Georges Bernanos, who recognized the French apathy in the threat of Nazism in 1938, occur again with Islamic terror:

“Christendom created Europe. Christendom is dead. Europe is going to cave in. Nothing could be simpler.”

Bernanos’ dire prognosis seems to be unfolding in France and Europe as it faces another violent murderous ideology. While the fleeting euphoria of a massive march may temporarily quell anxiety among the populace, the reality of a France bereft of its Catholic faith, leaves it defenseless to fight the radical ideology of indiscriminate terror.

Freedom is under assault by Islamic jihadism. Georges Bernanos describes the pathology of secularism, in one of his last essays entitled, Why Freedom:

“All humanity is sick. It is necessary above all to re-spiritualize man. For such a task it is time, high time, to mobilize all the forces of the spirit, in haste, cost what it may. God grant that the order to do this may come from my country, which is so humiliated today!”

Bernanos recognized that for generations, the French scoffed at the Catholic faith, and lost its soul, and its will to fight evil.

What will happen to France in the face of a violent and disenchanted Islamic extremist enemy which, like the Nazi Germans, now occupies France? Has Western Europe forgotten that in a mere six weeks the Nazi army conquered four countries? It can happen again and as quickly as before. The rampage of the cunning jihadists will continue unabated and largely unchallenged. They lurk, waiting for the opportune time to strike, in Parisian neighborhoods and throughout France, unleashing terror, not with an overpowering army, but with a handful of brutal ideologues, playing by their own set of murderous rules. This enemy has no uniforms, no generals, no rules of engagement and these warring occupiers have blended into French society as the elusive enemy.

France is on the verge of a bloody war for its soul. France needs a miracle.

Yet, the urbane and secular French cling to their pensions and paté, but not to their faith. According to a 2010 Eurobarometer Poll, only 27% of French citizens responded that "they believe there is a God.” This does not bode well for a country needing divine intervention to fight an enemy who is evil incarnate.

Secularism banished God and faith from the public square and yet the public square is now the battleground of the new evil of jihadism. How does France defeat this barbarian and religious zealot without the power and intervention of God? Bernanos aptly describes the symptoms of secularism, in a speech entitled Liberté:

“This sclerotic hardening and stiffening of consciences, this drying up of the soul’s deepest wellsprings, is a universal phenomenon. I have been observing in my own country, among my own people....God is going away, God is withdrawing from us, and how empty and heavy at once he is leaving us. We have lost that interior freedom that was our inherited privilege...and it’s God we have lost along with it.”

Hopefully, France has been brought to her knees. The nation was shaken by the despicable actions of only three people. Do not be fooled. More madmen are plotting in the shadows of Marseille, Toulouse, Lyon and Paris.   France needs a warrior saint, like the young peasant girl from Domremy, Joan of Arc, who fearlessly led the French army to defeat the English army against all odds. Armed with her orders from God, fervent prayer and a fearless heart, Joan uttered these memorable words before battle, “I am not afraid, for God is with me. I was born for this!”

The question remains. Will France return to prayer and to her heritage as the eldest daughter of the Church? Is there a glimmer of hope, a recognition that the only way to defeat the barbaric rampage of evil is through a return to the Catholic Faith, the faith of the fearless soldier Saint Joan, to the faith of the many French Marian miracle shrines, to the magnificent Notre Dame Cathedrals, 16 of them which tower over the French landscape.

A massive street march makes for good television optics. Nothing more. Inevitably, the marches end, people return to their everyday lives, waiting for the next catastrophe. Lay down your clever Je suis Charlie signs and pick up your rosaries and crucifixes. Yes, take to the streets and march to mass, on pilgrimages, to your beautiful Notre Dame Cathedrals. Fill them, like you filled the streets of Paris during the March for Unity,

Shortly before entering World War I, as a French soldier, Charles Péguywrote the moving poem, Presentation of the Beauce to Our Lady of Chartres, written during a pilgrimage in thanksgiving to Our Blessed Mother for answering his prayers to miraculously heal his young son of the deadly typhoid disease. As Péguy walked 3 days from Paris to the Notre Dame Cathedral de Chartres, he composed these stanzas which describe the power of Our Blessed Mother waiting at her Cathedral in Chartres to protect the warrior and vanquish the foe:

Sailing to your cathedral city thus we go,
A rosary of stacks emerges here and there,
As circular as tower, opulent and rare,
Like forts on a flagship, ringed against the foe.


You see us marching on, we are the infantry,
One step at a time is the most that we advance,
But two thousand years of the people and the Kings of France.


This is the stone without a stain, or fault.
Never was a prayer that carried greater weight.
And never was an argument that went more straight,
And never taller line soared to a boundless vault.

And when we shall awake, at dawn tomorrow,
It will prove a purifying resurrection,
The arms of your cathedral our protection,
Crippled by our journey, full of joy and sorrow.

France desperately needs to reengage its spiritual infantry to fight the evil of Islamic jihadism. Europe is on the verge of an epic battle with a relentless and barbaric enemy. The fight will be lost without its most potent weapon, the Catholic faith.

The final stanza of the poem, God and France by the warrior poet, Péguy, rings out an urgent and prophetic message for France:

“Now those Frenchmen, just as they are, are my best servants.
They have been and always will be my best soldiers in the crusade.
And there will always be a crusade.”

It’s time to start walking the pilgrimage to Chartres.


Elizabeth Yore is an international child advocate attorney who assisted the Belgian families of the murdered children during the White March. Formerly, she was Special Counsel to Oprah Winfrey, serving as her Child Advocate. Elizabeth was General Counsel at the National Center for Missing and Exploited Children and Director of its International Division. We are pleased to make her welcome here in the pages of The Remnant.
Published in Remnant Articles

[Comment Guidelines - Click to view]
The Remnant values the comments and input of our visitors. It’s no secret, however, that trolls exist, and trolls can do a lot of damage to a brand. Therefore, our comments are heavily monitored 24/7 by Remnant moderators around the country.  They have been instructed to remove demeaning, hostile, needlessly combative, racist, Christophobic comments, and streams not related to the storyline. Multiple comments from one person under a story are also discouraged. Capitalized sentences or comments will be removed (Internet shouting).
The Remnant comments sections are not designed for frequent personal blogging, on-going debates or theological or other disputes between commenters. Please understand that we pay our writers to defend The Remnant’s editorial positions. We thus acknowledge no moral obligation whatsoever to allow anyone and everyone to try to undermine our editorial policy and create a general nuisance on our website.  Therefore, Remnant moderators reserve the right to edit or remove comments, and comments do not necessarily represent the views of The Remnant.
back to top
Last modified on Sunday, February 22, 2015
Tweet
More in this category: « Christianity in America, RIP (Supreme Court Votes to Criminalize God's Law on Marriage) A New Stage in the Neo-Catholic Witch Hunt »