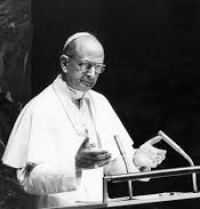 The celebration took place at the Church of All Saints, Via Appia Nuova--the very same church where, fifty years ago today, Pope Paul VI offered a prototype of the New Mass in the vernacular. His homily aptly began with, “Today we inaugurate the new form of liturgy in all the parishes and churches of the world.”

It was March 7, 1965, a date which will live in infamy.  There is a commemorative plaque on the wall at the Church of All Saints, which reads:

“At this place His Holiness Paul VI, as the liturgical reform decreed by the Second Vatican Ecumenical Council was beginning, was pleased to celebrate in this church the first Mass in Italian, amid the excited exultation of an entire people.”

But one reason the plaque now rests so high above the table/altar is because it was vandalized several times by members of the “entire people”, many of whom were infuriated by Bugnini’s attempted destruction of the Roman Rite over which Pope Paul VI dutifully presided. It was necessary, finally, to put the plaque out of the reach of faithful who couldn’t resist the urge to spit at it as they passed by, some even attempting to physically deface it.

Church of All Saints in Rome--the Place Where It All Began. (Note Commemorative Plaque on the Wall) 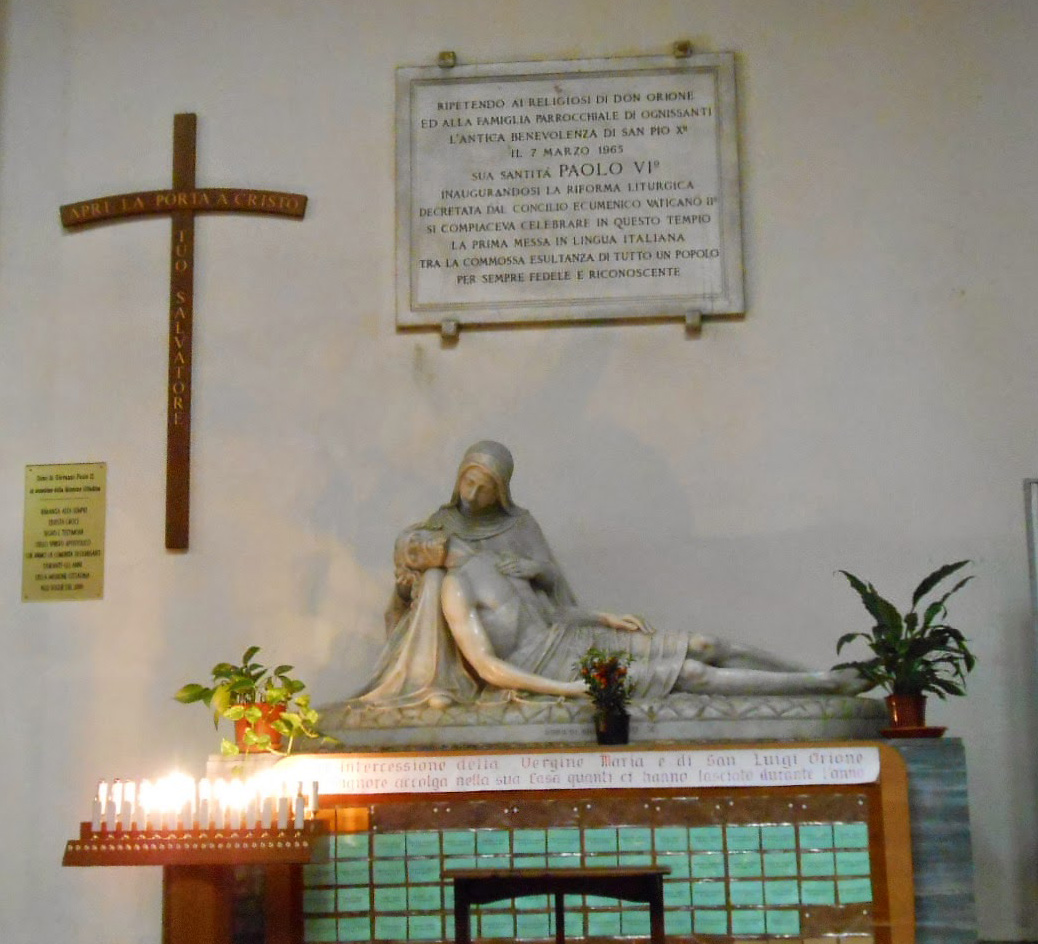 It was the infamous (and alleged freemason) Archbishop Annibale Bugnini who noted that the “liturgical reform is a major conquest of the Catholic Church,” and it was here in the Church of All Saints that that “conquest” was quietly introduced for the first time.

Since that time the Mass of Roman Rite has become a liturgical nightmare, with the faith of the Catholic people largely going the way of the Latin language because of it. Eighty percent of Catholics under the age of fifty no longer believe in the Real Presence of Christ in the Eucharist.

Of course, the Fathers of Vatican II never envisioned Pope Paul’s disastrous New Mass, nor had the Council itself ever called for something as outrageous as the abrogation of the venerable Roman Rite. According to Vatican II, Latin was to remain the language of the Mass and Gregorian Chant was to be given pride of place.

No, the so-called “New Mass” and all of its Protestant trappings were imposed on the Church by modernist revolutionaries acting under the auspices of the demonic “spirit of Vatican II.”

Half a century later the "New" Mass is so riddled with abuse and neglect that another Pope was recently induced to admit the obvious—that the Mass of Paul VI has been fully trivialized. On February 14, 2013 Pope Benedict remarked to the Roman clergy that the Second Vatican Council had “created many calamities, so many problems, so much misery, in reality: seminaries closed, convents closed, the liturgy was trivialized …”

Yes, trivialized—but not by time so much as design. By the early 1970s, conservative, tradition-minded bishops and cardinals were already attempting to put the genie back in the bottle, but, of course,  by then it was too late.

Cardinals Ottaviani and Bacci  famously intervened against the New Mass by writing to Pope Paul VI on September 25, 1969 that the:

accompanying critical study of the Novus Ordo Missae, the work of a group of theologians, liturgists and pastors of souls, shows quite clearly in spite of its brevity that if we consider the innovations implied or taken for granted which may of course be evaluated in different ways, the Novus Ordo represents, both as a whole and in its details, a striking departure from the Catholic theology of the Mass as it was formulated in Session XXII of the Council of Trent. The "canons" of the rite definitively fixed at that time provided an insurmountable barrier to any heresy directed against the integrity of the Mystery.

“Who dreamed on that day (when the Council Fathers voted for the Liturgy Constitution at Vatican II) that within a few years,” lamented Archbishop R. J. Dwyer, in Twin Circle, on October 26, 1973, “far less than a decade, the Latin past of the Church would be all but expunged, that it would be reduced to a memory fading in the middle distance? The thought of it would have horrified us, but it seemed so far beyond the realm of the possible as to be ridiculous. So we laughed it off.”

But not everyone in Rome was laughing at the notion of doing away with the venerable Roman Rite—the great rock of orthodoxy which had been codified five hundred years earlier by a canonized saint to stand as a liturgical fortress against Protestant heresy and Islamic assault. Many were complicit in its destruction, including the Pope himself, prompting a young Italian prelate named Mgr. Domenico Celeda to deliver a bombshell against the New Mass in May of 1969:

The gradual destruction of the liturgy is a sad fact already well known. Within less than five years, the 1000-year-old structure of divine worship which throughout the centuries has been known as the Opus Dei has been dismantled…Instead, a puerile form of rite has been imposed, noisy, uncouth, and extremely boring. And hypocritically, no notice has been taken of the disturbance and disgust of the faithful…Resounding success has been claimed for it because a proportion of the faithful has been trained to repeat mechanically a succession of phrases which through repetition have already lost their effect.”

The well-respected French liturgist, Fr. Louis Bouyer, had no intention of waiting fifty years to note the obvious where the New Mass of Paul VI was concerned. In 1968 he noted that “there is practically no liturgy worthy of the name today in the Catholic Church.”

For nearly 50 years The Remnant has been defending the liturgical traditions of the Catholic Church. Isn't it time for you to subscribe?

And by 1975, Fr. Bouyer would write: "The Catholic liturgy has been overthrown under the pretext of rendering it more compatible with the contemporary outlook—but in reality to confirm it with the buffooneries that the religious orders were induced to impose, whether they liked it or not, upon the other clergy. We don’t have to wait for the result: a sudden decline in religious practice, varying between twenty and forty per cent among those who were practicing Catholics…those who weren’t practicing have not displayed even a trace of interest in this pseudo-missionary liturgy, particularly the young whom they had deluded themselves into thinking they would win over with their clowning.”

The great Catholic author, Evelyn Waugh, was raising adamant protest against the New Mass as early as 1965—just months after Pope Paul had celebrated the Mass in the vernacular in the Church of All Saints in Rome. Waugh noted that since his private protests to the Vatican had been ignored it was time for him (and all Catholics) to speak out “to warn the submissive laity of the dangers impending. Those propagating the theories now being imposed had been with us in parts of the USA and northern Europe for a generation. We looked on them as harmless cranks who were attempting to devise a charade of second-century habits. We had confidence in the abiding Romanita of our Church. Suddenly we find the cranks in authority.”

The National Review’s William F. Buckley would somewhat humorously note in 1979 that:

As a Catholic, I have abandoned hope for the liturgy, which, in the typical American church, is as ugly and as maladroit as if it had been composed by Robert Ingersoll and H.L. Menchen for the purpose of driving people away.

Incidentally, the modern liturgists are doing a remarkably good job, attendance at Catholic Mass on Sunday having dropped sharply in the 10 years since a few well-meaning cretins got hold of the power to vernacularize the Mass, and the money to scour the earth in search of the most unmusical men and women to preside over the translation… I am practicing Yoga, so that, at church on Sundays, I can develop the power to tune out everything I hear, while attempting, athwart the general calisthenics, to commune with my Maker, and ask Him first to forgive me my own sins, and implore him, second, not to forgive the people who ruined the Mass.

And the late, great Dietrich von Hildebrand would famously say of Pope Paul’s New Mass that "truly, if one of the devils in C.S. Lewis' The Screwtape Letters had been entrusted with the ruin of the liturgy he could not have done it better."

Even many Protestants were perplexed by the New Mass. Professor Peter L. Berger, for example, a Lutheran sociologist, echoed von Hildebrand’s sentiments when he observed: "If a thoroughly malicious sociologist, bent on injuring the Catholic community as much as possible had been an adviser to the Church, he could hardly have done a better job."

, Pope Francis seems to ridicule those attached to the ancient Tridentine Rite of Mass as being motivated by "personal interests," which are not pleasing to God.  He recalled the Gospel account of the cleansing of the temple, and Jesus’ famous remark, “Do not make My Father’s house a marketplace!” This expression, the Pope said, did not just refer to those doing business in the temple; it refers to a certain type of religiosity. Jesus’ gesture is one of “cleansing, of purification.” God is not pleased with material offerings based on personal interests. Rather, Jesus is calling us to “authentic worship, to the correspondence between liturgy and life – a call that is true for every age, and also for us today.”

The Liturgical Revolution of Vatican II, it would seem, is now complete.

(Some quotations from “The Roman Rite Destroyed” by Michael Davies.)
Published in Remnant Articles

[Comment Guidelines - Click to view]
The Remnant values the comments and input of our visitors. It’s no secret, however, that trolls exist, and trolls can do a lot of damage to a brand. Therefore, our comments are heavily monitored 24/7 by Remnant moderators around the country.  They have been instructed to remove demeaning, hostile, needlessly combative, racist, Christophobic comments, and streams not related to the storyline. Multiple comments from one person under a story are also discouraged. Capitalized sentences or comments will be removed (Internet shouting).
The Remnant comments sections are not designed for frequent personal blogging, on-going debates or theological or other disputes between commenters. Please understand that we pay our writers to defend The Remnant’s editorial positions. We thus acknowledge no moral obligation whatsoever to allow anyone and everyone to try to undermine our editorial policy and create a general nuisance on our website.  Therefore, Remnant moderators reserve the right to edit or remove comments, and comments do not necessarily represent the views of The Remnant.
back to top
Last modified on Monday, March 9, 2015
Tweet

More in this category: « The SSPX 'Schism': EWTN vs. CMTV ‘Afraid of Pope Francis’: A Sobering Email from Father Anonymous »