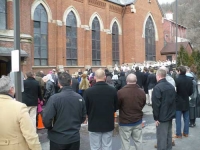 Well over 550 people braved subzero temperatures to celebrate the rededication of St. James 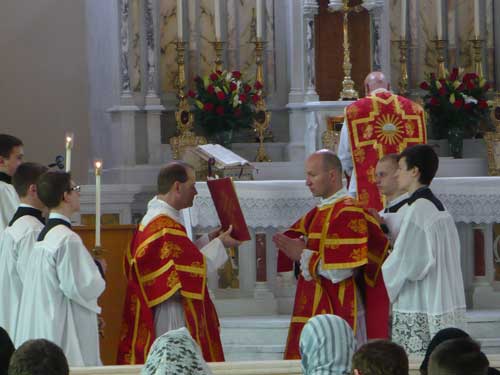 After several failed attempts to purchase closed Catholic church buildings in their own name, the Society sought to have third parties purchase the buildings and sell them to the Society. The Diocese learned of this plan and began inserting provisions in purchase agreements and deed restrictions that would prohibit the church building from ever being used by the Society.

While investigating the constitutionality of such restrictions, an incredible discovery was made. The Diocese had neglected to insert the deed restriction when it sold St. James Church in the West End of Pittsburgh to an art dealer. The dealer had used St. James as an art gallery and was now ready to part with it. In a series of events that were obviously guided by the hand of Our Lady, the Society of St. Pius X acquired unrestricted title to St. James on August 15, 2014 and began a period of extensive renovations of the church.

On March 28, 2015, St. James was once again packed with faithful Catholics attending the holy sacrifice of the Mass in its immemorial form. The official proceedings started at 11:00 a.m. with the blessing of the outside of the church building. The temperature was well below freezing, but the excited crowd did not seem to mind. Young children at the Pittsburgh School of Music stopped their class work and filled the windows to watch the proceedings. (This school was formerly the parish school of St. James prior to the devastation of Vatican II.)

After the blessing of the outside of the church building, the priests and faithful moved into the church where Fr. Pfluger blessed the main altar and both side altars. Thereafter, Fr. Pfluger blessed the walls and floors of St. James. Suddenly, the building turned into a church as candlesticks, statues, altar linens and flowers were brought in by the altar servers and placed in their appropriate spots. St. James was now ready for its first official Mass after its rededication. (Midnight Mass was offered on December 25, 2014, in the undedicated church, to commemorate that the first Mass ever offered at St. James was on December 25, 1853.)

This article doubles as a preview of the next print edition of The Remnant. What else will you miss if you don't subscribe today? 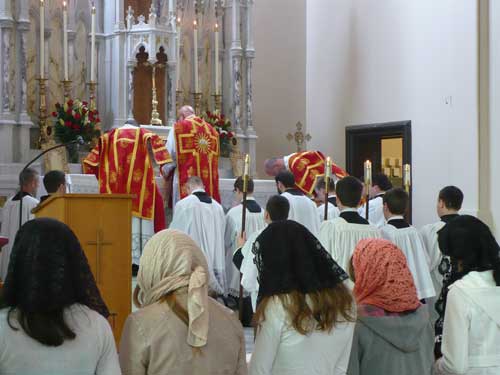 The processional hymn was “Faith of our Fathers” and several parishioners could be seen choking back tears as the meaning of the words of this hymn struck home. The celebrating priest, deacon, and sub-deacon were vested in red to commemorate St. James (the Moor slayer) who died as a martyr by beheading at the command of Herod in 42 A.D. Following the always beautiful High Mass, the congregation sang the hymn “To Jesus Christ our Sovereign King” as the recessional. Almost the entire throng of people gathered in the spacious basement of St. James for refreshments and to socialize and celebrate the final accomplishment of years of hard work and self-sacrifice.

As you might expect, the Pittsburgh Diocese did not take this defeat lightly. Saturday’s headline of the Pittsburgh Tribune Review blared in large bold letters:

Bishop Zubik is quoted in the article as saying “What makes this a concern is that it’s a church that used to be one of our own. My concern is that there will be people who will think it’s a legitimate Catholic church. We don’t want people to be misled.”

Bishop Zubik’s comments generated bemused comments from some of the parishioners of St. James. Several individuals noted that Pope Francis asked “Who am I to judge?” when asked about active practicing homosexuals - individuals in a state of grave mortal sin. It seemed to them to be inconsistent for Bishop Zubik to condemn devout Catholics that follow every single doctrine and dogma of the Catholic faith. Other individuals noted the hypocrisy of a Bishop selling closed churches to Protestants and even non-Christians but preventing the Holy Sacrifice of the Mass from being celebrated in them. 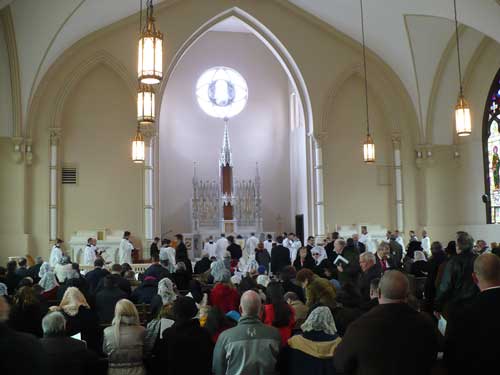 The contrast in the vibrant growth and deep faith generated by the Traditional Latin Mass, the apathy and loss of devotion created by the Novus Ordo could not be starker. As an example, prior to Vatican II, the north side of Pittsburgh had 19 parishes. It now has seven. Within the next 18 to 24 months, it will be down to three. Prior to Vatican II, the Diocese had nearly one million Catholics. It now has approximately 600,000. The shortage of priests in the Pittsburgh Diocese is even more dire. The dwindling number of priests are mostly in their sixties and seventies. In the next 10 to 15 years, there will not be enough priests to staff a third of the parishes that are open in Pittsburgh today. The Diocese is clearly in a shut-down mode and is trying to close its parishes/churches in as orderly a manner as possible.

Pray to God that there will be more “rogue” Catholics that will replicate the St. James victory throughout the country and the world.


The costs of purchasing and restoring St. James Church have been enormous. If you would like to help defray some of the costs this community has incurred to preserve and promote the immemorial Traditional Latin Mass and Sacraments please send donations to:

Make checks payable to “Our Lady of Fatima Chapel.”

[Comment Guidelines - Click to view]
The Remnant values the comments and input of our visitors. It’s no secret, however, that trolls exist, and trolls can do a lot of damage to a brand. Therefore, our comments are heavily monitored 24/7 by Remnant moderators around the country.  They have been instructed to remove demeaning, hostile, needlessly combative, racist, Christophobic comments, and streams not related to the storyline. Multiple comments from one person under a story are also discouraged. Capitalized sentences or comments will be removed (Internet shouting).
The Remnant comments sections are not designed for frequent personal blogging, on-going debates or theological or other disputes between commenters. Please understand that we pay our writers to defend The Remnant’s editorial positions. We thus acknowledge no moral obligation whatsoever to allow anyone and everyone to try to undermine our editorial policy and create a general nuisance on our website.  Therefore, Remnant moderators reserve the right to edit or remove comments, and comments do not necessarily represent the views of The Remnant.
back to top
Last modified on Tuesday, March 31, 2015
Tweet
More in this category: « Athanasius Smiled: Taking Back One of Our Places To Fly from the Cross: A History of Dark Disorder in the Catholic Church »