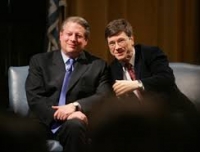 Jeffrey Sachs, friend of Al Gore, advisor to Pope Francis?
It is perplexing that abortion and reproductive rights zealots like, UN Secretary General Ban Ki Moon and Jeffrey Sachs, the Director of the UN Sustainable Development Solutions Network are prominently highlighted at this Catholic Conference in anticipation of Pope Francis’ Environmental Encyclical.

The Pontifical Academy posits that the goal of the conference is:


The desired outcome is a joint statement on the moral and religious imperative of sustainable development, highlighting the intrinsic connection between respect for the environment and respect for people--especially the poor, the excluded, victims of human trafficking and modern slavery, children and future generations.

This declaration of an intrinsic connection, a nexus between climate change and human trafficking is on its face, preposterous, deceptive and infinitely damaging to the plight of victims of human trafficking around the world. This fallacious statement links a real human crisis of modern slavery with a manufactured one of climate change.

Pope John  Paul powerfully articulated the intrinsic nature of modern slavery in 2002 at the International Conference entitled 21st Century-The Human Rights Dimension to Trafficking in Human Beings, John Paul urged:  “The sexual exploitation of women and children...must be recognized as an intrinsic violation of human dignity and rights, and to reduce the rich mystery of human sexuality to a mere commodity.”

Based on my experience with human trafficking victims, John Paul II uniquely understood that the cause of this crime is the violation of the dignity of the human person. Human trafficking thrives in both developed and undeveloped countries. Its victims and perpetrators span the economic spectrum. This crime is growing for a multitude of reasons, open borders, the ease of jet travel and transportation, the instantaneous Internet connection to conduct this criminal enterprise, and yes, abortion and its heinous and predictable mutation, sex selection abortion. Nature abhors a vacuum with a void of 140 million missing Asian girls, as a result of gendercide. Abortion is fueling the human trafficking trade. But at the core of modern slavery lies a malevolent heart which seeks to exploit and abuse another human being, as a disposable commodity.

And who is the Vatican consulting with on this problem? Jeffrey Sachs, who spends his career sounding the alarm that the world is overpopulated, and fertility rates must be lowered. In fact, at a 2007 international lecture, Sachs claims that “we are bursting at the seams.” The focus of Sachs’ overpopulation mantra is the continent of Africa. He argues that if only poor African countries would just lower their fertility rate, the world and Africa would thrive economically.

This fear mongering is nothing new. Sachs is standing on the shoulders of Paul Ehrlich, architect of the “sky is falling” deception perpetrated in his 1968 book, The Population Bomb. Ehrlich mastered the alarmist overpopulation canard with his infamous thesis, “the battle to feed all of humanity is over. In the 1970s hundreds of millions of people will starve to death in spite of any crash programs embarked upon now. At this late date, nothing can prevent a substantial increase in the world death rate.”

In furtherance of his imagined crisis, Ehrlich supported all kinds of draconian solutions to address this concocted calamity, including putting birth control in the water supply, forced abortions, coercive sterilizations, forcibly punishing countries who balk at implementing radical population control measures. Ehrlich’s recommendations also included punitive taxes on families who have children, and on childcare products, in order to “fix” the problem of global famine from overpopulation.

Ehrlich’s doomsday prophecy was a fraud.

Nevertheless, as a consequence of Ehrlich’s deceit, the UN began its course of worldwide reproductive edicts to reduce fertility, including contraception, sterilization and abortion. The big lie worked and the UN used fear as an opportunity to introduce abortion into the world order. Panic and fear mongering are the weapons of repressive organizations.

Jeffrey Sachs continues the Paul Ehrlich phony drumbeat of overpopulation, and conveniently adds new fear tactics of climate change and human trafficking to justify and bolster the urgency of abortion and other sterilization tools to achieve the UN’s Sustainable Development Goals.

The Remnant is fighting back, but we need your help!


Today, same scare tactics, same players, new alarm bells. The scare strategy of catastrophic global warming, debunked by science, morphs into climate change, debunked by science, morphs into sustainable development. Undeterred, the United Nations asserts its power to impose its elitists’ goals on the world under the rubric of “shared sustainable development goals.” Yet, forever embedded into the bureaucratic culture of the UN is their desired weapon of choice, abortion on demand. That is why it is so very troubling that at a Papal Conference entitled Dignify Humanity, the Vatican is consulting with the Secretary General of the UN and Jeffrey Sachs to recommend ‘sustainable development’ measures, which we all know are abortion, contraception and sterilization to solve alleged climate change.

As the Catechism of the Catholic Church teaches:

From the first moment of his existence, a human being must be recognized as having the rights of a person – among which is the inviolable right of every innocent being to life.” CCC2270

The Church believes that every human being, rich and poor, has an inviolable right to life. “The inalienable rights of the person must be recognized and respected by civil society and the political authority.” CCC 2273

Over the centuries, Catholic moral teaching uniquely understood the power of laws to deprive certain human beings of the right to life.

The moment a positive law deprives a category of human beings of the protection which civil legislation ought to accord them, the state is denying the equality of all before the law.” CCC 2273

These are the precious and profound tenets of the Catholic Church regarding the sacredness of life and human dignity. So, it is perplexing that abortion and reproductive rights zealots like, UN Secretary General Ban Ki Moon and Jeffrey Sachs, the Director of the UN Sustainable Development Solutions Network are prominently highlighted at this Catholic Conference in anticipation of Pope Francis’ Environmental Encyclical.

As a Catholic, I am deeply troubled by the recommendations and policies promulgated over the last 20 years by Jeffrey Sachs, in his various roles at the United Nations. As Director of the UN Millennium Development Goals, and now, as director of UN Sustainable Development Solutions, his rabid advocacy of abortion, and reproductive health services are in direct contravention of the moral teaching of the Catholic Church.

In fact, the very success of Sustainable Development, the new UN global initiative depends according to Sachs, on reducing the high fertility rate of Third World Countries. In Jeffrey Sach’s newly book published in 2015, “Sustainable Development” Dr. Sachs’ states: "The legality of abortion also plays an evident role as well. Different societies have widely divergent views about abortion, but the data suggests that those countries with legalized abortion tend to have lower observed fertility rates than countries where abortion is illegal."

Population dynamics are very important for Sustainable Development. The chances for sustainable development will be very different if the population reaches 10.8 billion at the end of the century or instead peaks by 2050 and declines to 6.8 billion by 2100. The later trajectory would be much easier from the point of view of achieving a higher quality of life, greater poverty reduction, higher income per capita and environmental sustainability.

Listen to the scare tactics employed by Sachs: “I am really scared about population explosion in Nigeria. It is not healthy. Nigeria should work towards attaining a maximum of three children per family.”

Here is one man, Jeffrey Sachs, with the enormous power and influence of the United Nations lecturing Nigerian families to limit the size of their families to 3 children. The hubris is breathtaking.

In conclusion, I find it incomprehensible that the Vatican would be duped into thinking that the United Nations and its Millennium and Sustainable Development Czar share common solutions for the world’s problems. The Catholic Church welcomes children as a gift from God. The UN Secretary General and Jeffrey Sachs want to limit children.

We seek the truth today and turn to the Child, both unborn and born, rich and poor, whether African, Asian, European, or from the Americas.

For the Child is the Guardian of the Truth.

[Comment Guidelines - Click to view]
The Remnant values the comments and input of our visitors. It’s no secret, however, that trolls exist, and trolls can do a lot of damage to a brand. Therefore, our comments are heavily monitored 24/7 by Remnant moderators around the country.  They have been instructed to remove demeaning, hostile, needlessly combative, racist, Christophobic comments, and streams not related to the storyline. Multiple comments from one person under a story are also discouraged. Capitalized sentences or comments will be removed (Internet shouting).
The Remnant comments sections are not designed for frequent personal blogging, on-going debates or theological or other disputes between commenters. Please understand that we pay our writers to defend The Remnant’s editorial positions. We thus acknowledge no moral obligation whatsoever to allow anyone and everyone to try to undermine our editorial policy and create a general nuisance on our website.  Therefore, Remnant moderators reserve the right to edit or remove comments, and comments do not necessarily represent the views of The Remnant.
back to top
Last modified on Tuesday, April 28, 2015
Tweet
More in this category: « Dead Cat Bounce Father Nicholas Gruner, RIP »