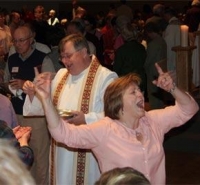 I recently had an experience I would like to share with you and my fellow Catholics. Writing this has been somewhat therapeutic for me and I pray it’s of interest to your readers.

As Catholics we are catechized with the truth that there are numerous rites of mass that all show forth the singular reality of Christ’s sacrifice. For those of us who are Latin rite Catholics we are told the Church has given us two equivalent expressions of the Sacred Mysteries. By expressions I am referring to the Tridentine rite of Mass and the Novus Ordo rite of Mass. It has been my experience that these two rites do not necessarily demonstrate an equivalent expression of the Sacred Mysteries, but expressions that are at times antagonistic. It was this antagonism in worship that I recently witnessed.


On Sunday March 22, 2015 I went to two Masses, but sad to say, I had two very different and indeed opposite experiences of the Sacred Mysteries. I attended both the Tridentine Mass and the Novus Ordo Mass (in English) on the same day. One Mass invited me to participate in manner that did not distract from the Sacrifice of the Mass, and the other invited me to be distracted from the Sacrifice of the Mass. It is hard to compare these two Masses, as they seem to be cut from two very different cloths and directed toward two very different ends.

The striking difference that first hits you is the quiet and calm manner in which the Tridentine Mass was conducted versus the noisy and chaotic manner in which the Novus Ordo Mass was conducted.   When I first entered into the church for the Tridentine Mass I knew that we were preparing to celebrate the Sacrifice of the Mass. We would be with Jesus and Mary at Calvary. When I entered into the church for the English Novus Ordo Mass I felt my focus drawn away from thinking about Mass, and drawn to the conversations around me. Some of those conversations continued throughout the whole Mass. My wife, at one point, gave a motherly glance back at three young girls behind us who had been chatting since prior to the Mass, and was met with a laugh and a “She turned around! Did you see her looking at us?” Did that stop them from visiting with one another? No, it gave them something else to talk about.

Their parents, who were also behind us, didn't even bother to address them. At the beginning of the Novus Ordo Mass, the priest began and then stopped to welcome everyone and to make some introductions. As we sat in our cushioned chairs and sang what seemed to be every response, accompanied by some stringed instruments. To our amazement, a cell phone that went off during one of these accompaniments blended in so seamlessly that even the gentleman whose phone it was did not notice it until someone came and turned it off for him.
The Remnant is running a series called "The Traditional Latin Mass 101" in its print edition.  If you want to learn more about the importance of the old Latin Mass subscribe to The Remnant today!
By the time we had reached the homily, I was still trying to process all of the activities that had led up to that moment. I was hoping that the priest's homily would draw my focus back to the scripture readings for the day, but that hope was dashed. Instead of even remotely tying in the scripture readings, we instead were treated to a presentation about the priest’s personal love of art and how he traveled for hours just to see the work of an artist that was a favorite of his. He likened it to going to your favorite band's concert and doing anything to get the tickets because of the way it made you feel to be in the presence of a favorite band and to hear your favorite tune. It was so highly personalized that it was almost as if mentioning God would have taken away from his homily. Thankfully, I have pushed most of it out of my memory as it was more like a Yelp review than anything else. Had I not been to mass earlier in the day, in which God was exalted and elevated to where He rightfully should be, as the main focus and thrust of the homily, I would have felt cheated.

At the Tridentine Mass, on the other hand, the homily called for us to view God not how we would want Him to come to us, on our terms, but as He actually comes to us. It was a call for holiness on our part. What a difference.   Since I had already been to Mass I decided that receiving Holy Communion at this “new” Mass was not something I would do. As I knelt there I watched people receive Holy Communion in various manners. The casual demeanor of some people struck me. They nonchalantly took Our Lord into their unconsecrated hands. One gentleman was holding his child's car seat in one hand and thrust his other hand out to receive our Lord. With Jesus in his palm and not missing a beat, he popped our Lord into his mouth like a potato chip and kept walking.

At last the light at the end of the tunnel could be seen, as we started to prepare for the end of Mass. The priest spoke and almost everyone in unison replied with something. My wife and I looked at each other and had that “What we talkin' bout?” moment.   I felt as though I had been invited to an event that everyone but I knew what was going on.

Just standing in the two churches formed a remarkably stark contrast. In the church where the Tridentine Mass was celebrated the statues were veiled for Passiontide. There are numerous stained glass windows, a beautiful set of stations and many other visual representations of our Holy Faith. Contrast that with the bare walls of the church where the Novus Ordo was celebrated. The lone figure I could see was our Lord suspended over the altar, His head bowed low. Jesus seemed so alone.

It is a moment like this that reminds me to be thankful to Almighty God for the gift of the Tridentine Mass.

Sincerely yours in Christ,

[Comment Guidelines - Click to view]
The Remnant values the comments and input of our visitors. It’s no secret, however, that trolls exist, and trolls can do a lot of damage to a brand. Therefore, our comments are heavily monitored 24/7 by Remnant moderators around the country.  They have been instructed to remove demeaning, hostile, needlessly combative, racist, Christophobic comments, and streams not related to the storyline. Multiple comments from one person under a story are also discouraged. Capitalized sentences or comments will be removed (Internet shouting).
The Remnant comments sections are not designed for frequent personal blogging, on-going debates or theological or other disputes between commenters. Please understand that we pay our writers to defend The Remnant’s editorial positions. We thus acknowledge no moral obligation whatsoever to allow anyone and everyone to try to undermine our editorial policy and create a general nuisance on our website.  Therefore, Remnant moderators reserve the right to edit or remove comments, and comments do not necessarily represent the views of The Remnant.
back to top
Last modified on Tuesday, May 12, 2015
Tweet
More in this category: « An Unholy Alliance Novus Disorder in Fatima »