In the Spirit of the Mother of the Maccabees: A Sermon on American Christophobia Featured 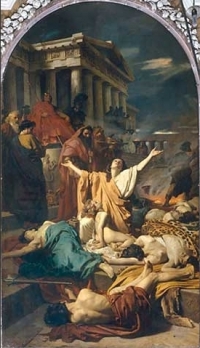 Martyrdom of the Seven Maccabees,a depiction of the woman with her seven dead sons

This weekend our nation celebrates Labor Day. The origins of this national holiday go back more than a hundred years, when many workers in factories and fields were grossly overworked and often underpaid. Since that time in affluent America the rights and dignity of workers have made significant advances, often through the intervention of government, which imposes worker-friendly standards upon employers. How ironic then that on this extended weekend, intended for the rest and recreation of laborers, this same government which claims to care about workers has now imprisoned one of its own public servants.

I am speaking of the county clerk in Kentucky, who sits in a jail cell over this three day weekend for the alleged crime of refusing to authorize and issue same-sex marriage certificates to homosexual couples.

The first issue to be addressed is whether or not this clerk would be acting immorally to sign the papers. Catholic moral theology distinguishes between direct and indirect causes as well as proximate and remote causes. In this matter, a homosexual couple entering into a legal marriage is directly participating in something that is intrinsically evil. An intrinsic evil is that which is in and off itself always evil, without any exception. Homosexual activity--and by extension a homosexual legal union--is intrinsically evil because it is contrary to human nature, the moral order for human beings as determined by God the Creator. But what about others who may be drawn into this moral disorder, for one reason or another? Some would be only remotely connected and could therefore continue their work, such as the janitor who cleans the government office or the IT guy who maintains government computers. But those who are proximately involved, such that the immoral act could not be committed without their involvement, may not participate in the act. This would include civil witnesses of same-sex weddings and this county clerk.

The reaction to this situation which has received national attention is mixed, a phenomenon manifesting just how religiously and morally bankrupt we have become as a nation. Decades ago it would have been unthinkable that homosexual couples would one day be afforded marriage protection, let alone that a civil servant would be imprisoned for her refusal to issue same-sex marriage licenses. Homosexual activists and their allies are gleeful over this situation and will advance their perverted agenda by her court ordered punishment. Many government officials and politicians are claiming that the so-called Rule of Law must be strictly adhered to and enforced against those who have an oath of office. Never mind the fact that until just a few weeks ago, when the Supreme Court ruled in favor of homosexual marriage, the president of this nation and his attorney general were adamant that they would not enforce the protection of traditional marriage, as formerly required under the Defense of Marriage Act (DOMA). Who really belongs in jail?

Even among so-called conservatives, including in the Catholic realm, there are many who are distancing themselves from this situation or outright throwing this poor woman under the government bus. Some are claiming that she could, in good conscience, sign the papers or allow her staff to do it on her behalf. Others argue that she should simply resign her position, since she cannot fulfill the oath of her office. Never mind the fact that her state constitution and the Religious Freedom Restoration Act protect her:

The right to act or refuse to act in a manner motivated by a sincerely held religious belief may not be substantially burdened unless the government proves by clear and convincing evidence that it has a compelling governmental interest in infringing the specific act or refusal to act and has used the least restrictive means to further that interest.

But even apart from state protections that have been rendered impotent by courts and government, the reality is that no human law which is contrary to divine or natural law is rightful or binding upon any human being. This is not just a “Christian” issue regarding religious freedom; it is a fundamental issue regarding human freedom to reject what is evil and do what is right. Without doubt, Kim Davis is right.

And why should she resign? Thank God that out of the 3,000 plus county clerks nationwide there is at least one who has said, in effect, “I obey God and not men!” God knows there has been enough of retreat and surrender over religious and moral issues in this nation for several decades, including among so-called Catholic institutions—hospitals and schools—and many members of the hierarchy. So what has surrender and retreat accomplished for us up to this point? Nothing but lost ground and lost credibility!

What should we say of this woman? Well, to quote a certain cardinal but to apply it in a quite opposite way, “Bravo!” Thank you for your public service but thank you much more for your public witness of standing up against a government that has gone corrupt. As her critics are quick to point out, Kim Davis is no saint herself. But she never claimed to be perfect; she only claims to be Christian. Would that there were more Catholics like this Protestant, who are willing to suffer great loss for the sake of the Kingdom.

I can’t help but think of a similar situation that occurred in the second century before Christ, when a godless tyrant arose who hated true religion and its adherents. In the time of Antiochus Epiphanes—a man who fancied himself as god manifest—the forces of government sought to break and crush true religion. He outlawed the reading of Sacred Books and honoring the Sabbath; he desecrated and transformed the Jewish Temple into a pagan place of worship; and he commanded that Jews should eat forbidden pork.

Many of the Jews capitulated to the demands of the government but one woman refused, for which crime she was forced to watch her seven sons tortured and executed. The Sacred Author comments upon the virtue of this woman, of whom it is said that her being was “filled with wisdom, joining a man’s heart to a woman’s thought.”

God bless this clerk, who in this matter acts with a Catholic conscience and courage!

[Comment Guidelines - Click to view]
The Remnant values the comments and input of our visitors. It’s no secret, however, that trolls exist, and trolls can do a lot of damage to a brand. Therefore, our comments are heavily monitored 24/7 by Remnant moderators around the country.  They have been instructed to remove demeaning, hostile, needlessly combative, racist, Christophobic comments, and streams not related to the storyline. Multiple comments from one person under a story are also discouraged. Capitalized sentences or comments will be removed (Internet shouting).
The Remnant comments sections are not designed for frequent personal blogging, on-going debates or theological or other disputes between commenters. Please understand that we pay our writers to defend The Remnant’s editorial positions. We thus acknowledge no moral obligation whatsoever to allow anyone and everyone to try to undermine our editorial policy and create a general nuisance on our website.  Therefore, Remnant moderators reserve the right to edit or remove comments, and comments do not necessarily represent the views of The Remnant.
back to top
Last modified on Saturday, September 12, 2015
Tweet
More in this category: « The Rosary at Ground Zero: 9/11 Remembered BOMBSHELL: Bishop Morlino Apologizes to the SSPX »