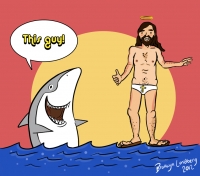 Someone sent me Bronwyn Lundberg's “This Guy!” the other day. I guess I'd somehow missed this particular “masterpiece” the first time around since it actually preceded her sensationalist 'The Last Supper' from last year, which included the likenesses of Ellen DeGeneres (as Christ), that loudmouth ex-Catholic with the anger-management issues and a few lesser known gay icons as part of its heavy-handed attempt to be provocative.

Bronwyn Lundberg enjoys spoofing Christian art so much that she’s evidenlty cranking off one of these bad boys annually. The original title of this thing was “Jesus Christ, Jesus!” Get it? Ain’t that funny!

And just who is this Bronwyn Lundberg? Exactly!

But we’re supposed to be dutifully offended, perhaps even demand an apology from her. Right? Well, perhaps another time. Some sort of emotional imbalance seems to be at work here. Healthy people without anger management issues don’t typically run around insulting other people’s religions. Does Bronwyn pick her dried nasal mucus in public, as well? Why should we be offended by someone so obviously ill-bred?

Or maybe poor Bronwyn is just trying to sell herself by being offensive. But that’s so sad, that she would somehow fail to realize how unimaginative and unoriginal that makes her—two adjectives not typically associated with great artists. Bronwyn’s only chance of becoming something in the art world  would evidently rest solely on her ability to rip off Andres Serrano, bring little old ladies to tears, and anger Bill Donahue. We should probably feel sorry for her, I suppose, since one day she'll likely grow up and realize what a buffoon she was.

The real story here is that anyone would still bother with such “artists” and their been there, done that finger paintings. I mean, is there actually a market for this excriment?  If there is that’s certainly the takeaway, and it’s interesting even if Bronwyn and her angry doodling are not.

We hear so much these days about how hateful the so-called “Christian right” is, how dangerous we all are, how intolerant. And yet every time we turn around some other attention-seeking college dropout is kicking off some lame little publicity stunt by insulting everything Christians hold sacred. Doesn’t that get a little old after a while? And where are the calls for greater sensitivity from those paragons of tolerance in the media?

Quick, someone shoot it over to Anderson Cooper.  I’m sure CNN will lead with this outrage perpetrated against  Jesus Christ and Christian America—this and the big story out of hell which is apparently showing signs of freezing over this winter, believe it or not.

Am I personally offended? Not in the least, no more so than I would be by some bleary-eyed crack head calling me names from a dumpster. One considers the source, and moves on. But still, it must be conceded that Mr. Crackhead—not the folks he’s screaming at—does represent something of a threat to the peace and common good. Christians are not the problem; the dumpster-diving Leftists and their hatemongering certainly are. And yet the media can’t seem to get enough of it.

Ironically (given all the media talk about Christian “hate”), even despite this incessant mockery and blasphemy Christians are the one group that can be counted on to not retaliate. Bronwyn knows she has nothing to fear. There will be no bomb threats; she needs no bodyguards. Christians don’t return hate for hate. In fact, they’re rather famous for turning the other cheek.

We tend not to get too worked up by folks hating us and shouting ugly blasphemies in our direction. It sort of comes with the territory. Paradoxically, in fact, if they ever do stop persecuting us it will mean we have stopped being Christian. After all, our Church rests on the bones of our mocked and martyred forefathers. A symbol of ghastly execution—the Cross—is our most sacred symbol. The Founder of our Church was accused of sedition, condemned to death, and executed. The heroes of our Faith were slaughtered as elements of entertainment provided for the mindless mobs of history.

And now they’re at it again. But we don't threaten retaliation. We are not haters. For us, the Left’s hateful need to blaspheme Christ and mock Christians only further authenticates Christianity. True followers of Christ will always be mocked and persecuted. And to the extent that we are mocked and persecuted today we fall happily in with the true followers of Christ. Persecution is affirmation that we’re on the road that leads to Calvary--the real, historic Calvary. They hate us because they hate Him because He really exists—and they know it.

So hate on, liberals and leftists. Go ahead, make our day! Your Christophobia only reaffirms that Christ really walked this earth, that He died, raised Himself from the dead and founded a Church—our Church. And though you may scream and hiss at Him still, even after all of these centuries, your hate—your blasphemy, your mockery—only proves that you too know Who He is.

Well played Bronwyn Lundberg, whatever you are. Your “art” strengthens our resolve. But this country does indeed have a serious problem with hate groups—and the hate that fuels those groups is coming from the radical Left.

My God: I believe, I adore, I trust and I love you.

I beg pardon for those who do not believe, do not adore, do not trust and do not love you.

Published in Remnant Articles
back to top
Last modified on Saturday, February 15, 2014
Tweet