The Money Trail: Why Catholic Bishops Are Silent on Hillary Featured 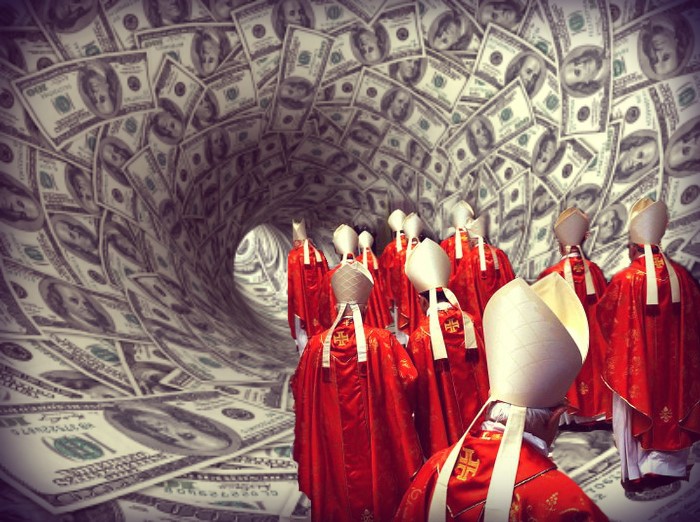 The silence about Hillary Clinton is deafening. One hears nothing but crickets from the U.S. Bishops and Cardinals about the democratic presidential candidate’s radical pro-abortion stance, but for the banished Cardinal Raymond Burke.

Why are they sitting mute on the sidelines? How could they be conflicted between an abortion laden democratic platform and the most prolife republican platform ever? Seems like an obvious choice for Catholics. After all, St. John Paul II described life as “the most basic and fundamental right and the condition for all other personal rights.” What’s going on?

When in doubt, follow the money. This ecclesial trail is flush with cash.

Could it be that the bishops don’t want to anger their federal piggy bank by squealing about that rabid abortion loving democratic candidate, Hillary Clinton?

Could it be that the USCCB enjoys and wants to continue to be awash in Obama cash?

Did the democratic Obama Administration buy the election silence of the Catholic episcopacy by bestowing millions of federal dollars into the coffers of Catholic institutions?

Do the Bishops believe that a President Hillary Clinton is preferred because she will continue to fund their plentiful federal grants for Muslim refugee resettlement?

Oh, the irony! This is the same Obama Administration that has forced lawsuits by the Little Sisters of the Poor, Catholic schools, Catholic businesses and Catholic lay organizations for mandating compliance with Obamacare rules in violation of Catholic doctrine.  Yet, the Bishops stand ready, willing, and able with their hand in the federal cookie jar to implement the Muslim refugee resettlement agenda.

While the Little Sisters of the Poor battled Uncle Sam, the U.S. Bishops and Cardinals were lining the Church coffers with blood money from Uncle Sam.

This isn’t about conscience, folks. It’s about their checkbook.

Come out and hear Elizabeth speak at this coming weekend's Catholic Identity Conference near Pittsburgh!

Elizabeth is a last-minute addition to the speaker roster, and she and Michael J. Matt will tag-team a PowerPoint presentation on the SOROS/VATICAN connection. Don't miss it!

Take a look at the jaw dropping beneficence from the federal fairy godmother government deposited into the bank accounts of the Catholic hierarchal institutions. It’s all on display at USASpending.gov.

During the most anti-Catholic administration in the history of the U.S., the Catholic bishops have enjoyed enormous financial benefits carrying out the mission of the Obama administration.

Here’s the Church, here’s the steeple, open the doors and see all the federal dollars.

This is only a partial list of federal government grants to Catholic groups, but the USCCB, Catholic Charities, CRS and the International Catholic Migration Commission received jaw dropping grants to carry out the Obama agenda in FY16.

These grants cover fiscal year 2016 only:

During FY16, the USCCB received federal grants totaling a whopping

According to the USASpending.gov, the top programs carried out by the USCCB, on behalf of the Obama Administration were:

Clearly, the U.S. Bishops are fully supportive of the Obama Administration mass refugee resettlement program. It’s been a very lucrative venture for the USCCB. Donald Trump seeks to suspend the Muslim Refugee migration program into the United States. Supporting a Donald Trump candidacy would halt all Syrian Muslim refugee migration into the U.S. His policy of suspending Muslim refugees would be quite costly for the Bishops and deplete their coffers. The present day Money Changers aren’t willing to relinquish their federal revenue flow.

The Catholic Bishops landed even more federal goodies to carry out the massive refugee migration resettlement agenda of the Obama Administration. Mass migration of Syrian refugees provides a lucrative business model for the Catholic Church but they might want to ask the Catholics in the pews about this highly controversial policy of putting Muslim refugees in U.S. towns.

The U.S. Department of State doled out $17+ million to ICMC grants. The sole purpose of the grants is stipulated for U.S. Refugee Resettlement.

Wake up, Catholics! The USCCB and its partners are quietly assisting the Obama administration in resettling into the United States, tens of thousands of Muslim Syrian refugees. Where are the photos? Why the secrecy? Curiously, only a tiny fraction of persecuted Middle Eastern Christians are included in the refugee population. Perish the thought that the Catholic Church would demand that Christian refugees be given priority over Muslims. That controversial stance might jeopardize their federal contracts.

There are thousands of other federal grants and contracts to the Catholic Church stored in the Obama administration piggy bank, but these 3 grant recipients demonstrate the ongoing fiscal relationship with the Democratic Obama Administration.

Following the lead of Pope Francis and his globalist agenda, the American Catholic hierarchy are relegating the prolife ministries to the doctrinal ash heap and committing funds and personnel to promote environmental and migration issues. Catholics are witnessing the bureaucratic deconstruction of the prolife movement in chanceries and the elevation of migration and immigration in its place. Catholic children are learning about the sin of littering, the importance of tree hugging and sexual hugging in the latest Vatican sex education curriculum.

Why? It’s simple: Follow the greenbacks in the environmental “green” movement. The global environmental and migration movements are overflowing with cash. For decades, the Catholic Church has been the odd man out, battling the United Nations and its abortion infused agenda under the guise of faux climate change. In previous papacies, the Catholic Church leaders were mocked as unenlightened dinosaurs and misogynists for fighting for the protection of the life of the unborn. Alleluia! The Church is no longer the outsider under the hip and relevant Francis papacy.

Along comes mega billionaire George Soros, as the global architect of an international mass migration policy that fills the Catholic Church coffers and floods Europe and America with Muslim refugees. Pope Francis and his minions now are welcomed and celebrated on the global stage as elite players. This unholy alliance is exposed in the leaked Soros Open Society documents and the embedded Vatican presence of Soros operatives, like Jeffrey Sachs and many others.

As the DCLeaks Soros documents reveal, Soros fosters, foments and implements internal chaos and disruption through organizations which he funds. The Syrian refugee crisis is being funded by George Soros through left wing groups to generate support for Obama’s plan to surge thousands more Syrian refugees into American towns and cities.

George Soros accurately and cleverly identified the Francis Vatican as a sympathetic ally for the many Open Society initiatives. Together with President Obama, whose federal contracts and grants implement Soros’ reckless refugee policy, the unholy alliance emerged with the Catholic Church participating in the Soros global vision of a massive global refugee chaos.

With the upcoming election, Soros is taking nothing for granted. He has already poured $25 million into the Hillary Clinton campaign to ensure the continuation of the flood of refugee migration into Europe and the U.S. Shockingly, the Catholic Church facilitates the Soros vision and is paid handsomely by the Obama administration.

It’s no surprise that the Catholic Bishops remain silent about the abortion loving Hillary Clinton. They wouldn’t want to endanger their lavish federal contracts. After all, Hillary has promised to dramatically increase the number of Syrian refugees into the U.S., to the delight and insistence of her financial backer, George Soros.

It’s no surprise that Bishop Kevin Farrell of Dallas, condemned what he called the “déjà vu of immigrant bashing” reminding his diocesan Catholics of Trump’s words.

It’s no surprise that LA Archbishop Jose Gomez opined that Trump’s stance on immigration “is not right.”

It’s no surprise that the Catholic Bishops, under Vatican orders are promulgating the migration of Muslim refugees into the United States. The Bishops have made a calculation that migration trumps (‘scuse the pun) the pro-life issue. Migration pays very well, pro-life pays nothing.

With millions of federal funds to support the Obama administration’s mass refugee resettlement program, it is expected that the Bishops will remain silent about Hillary Clinton, and criticize Donald Trump who seeks to halt Syrian refugee migration into the U.S., so that vetting for terrorism can be ensured. The Bishops’ silence comes at a big price.... hundreds of millions from Barack Obama.

We hear much about vote your conscience. Catholics, take note of the cozy blasphemous financial arrangement between the democratic abortion- promoting Obama administration and the Catholic hierarchal money changers as you inform your conscience.

It’s no wonder that the Bishops' Conference won’t bite the hand that feeds it.

[Comment Guidelines - Click to view]
The Remnant values the comments and input of our visitors. It’s no secret, however, that trolls exist, and trolls can do a lot of damage to a brand. Therefore, our comments are heavily monitored 24/7 by Remnant moderators around the country.  They have been instructed to remove demeaning, hostile, needlessly combative, racist, Christophobic comments, and streams not related to the storyline. Multiple comments from one person under a story are also discouraged. Capitalized sentences or comments will be removed (Internet shouting).
The Remnant comments sections are not designed for frequent personal blogging, on-going debates or theological or other disputes between commenters. Please understand that we pay our writers to defend The Remnant’s editorial positions. We thus acknowledge no moral obligation whatsoever to allow anyone and everyone to try to undermine our editorial policy and create a general nuisance on our website.  Therefore, Remnant moderators reserve the right to edit or remove comments, and comments do not necessarily represent the views of The Remnant.
back to top
Last modified on Wednesday, September 7, 2016
Tweet