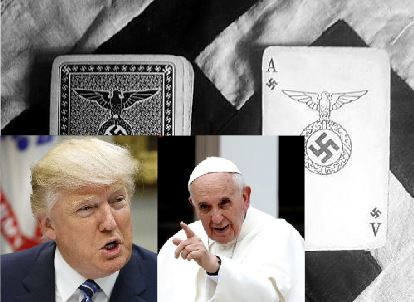 So, the inevitable has finally occurred: Pope Francis has speculated openly that President Donald Trump may turn out to be the next Adolf Hitler. I wish to note at the outset that I am not at all interested (at the moment) in defending the incoming American administration, or even in considering it directly. Let’s wonder instead about the characteristic way in which this Holy Father consistently tries to demonize others who might conceivably stand in the way of the accomplishment of his agenda. Since he has brought it up, let’s focus on this particular way--on Pope Francis playing the Nazi card, no less.

National Socialism was a specific, identifiable phenomenon; superabundantly documented, and not lost just yet in the mists of a distant past, either. It was what it was, not what anyone chooses to say it was. Nevertheless, the same individual who feels entitled to the creation ex nihilo of his own version of theology now wants to try his hand at some revisionist history, too. Still, a pope, qua pope, is no more of an authority on sociology than he is on climate change. So, here are just a few more points about which I would like to request some clarification from the reigning Roman pontiff:

1. Holy Father, was Nazism actually an effort—as you have recently alleged—to “guard national identity” in the same way that the present-day advocates of closing European and other borders wish to do; or was it, rather, the attempted warping of that identity by twisting it away from all Judeo-Christian grounding? Was not the notion of an Aryan ideal—derived from Nietzsche, but also from other occultish roots—superimposed upon Germany and the surrounding countries through the seizure of the reins of power by an elitist clique intent on infecting an entire culture with its totalitarian ideology? Hans and Sophie Scholl of the White Rose resistance group, among countless others, raised their voices at the cost of their lives in favor of national identity and against the Hitlerian superimposition; in their leaflets, the Scholls warned that Germany would forever be vilified as a nation of murderers and thugs unless their compatriots rose up and put down National Socialism as Cardinal von Galen, in the name of Jesus Christ, had been imploring everyone to do. So, is it really fair for you, Pope Francis, to imply that those of us who want to protect the authentic identities of our own countries and cultures are comparable to their destroyers, rather than to those who heroically resisted such destruction?

2.   Are you inexcusably unaware that Adolf Hitler and his henchmen considered it their premier objective and duty to “break with the past”? They saw history as one long, forward march; in “doing the work of the Lord”—as the Fuehrer consistently insisted was his objective, throughout the entirety of Mein Kampf—the Nazis understood themselves to be called to usher in a new era. Not for them, the strictures of tradition; in place of the Christmas tree, the Yule Log; in place of the scouting groups, the Hitler Youth; in place of education, indoctrination; in place of ordered liberty, an automatic submission to the unfiltered directives of an idiosyncratic dictator. And not only that; people were expected to pretend that all the Nazi introductions actually represented the real tradition in the first place; that the Yule Log was the original “German way” of celebrating the solstice, and so on. In fact, the entire scenario exactly parallels the methodology according to which you and your fellow Marxist-Kasperites have been trying to insinuate the “non-changes” of Amoris Laetitia throughout the one, holy, catholic, and apostolic Church lately—by claiming to be answering to a “god of surprises” while, simultaneously and contradictorily, asserting that things have really been like that all along. And we haven’t even gotten to the issue of your simmering Schola Occurentes yet, evidently poised to airbrush away all memory of genuine Christendom after the last generation to know about it has conveniently died off. The Hitlerians once realized they had to try to cast a net around the worldview of the next generation, too. Do you honestly believe, Holy Father, that none of us knows, or cares, anything about all of this? Are you under the self-deception of the demagogue who considers the masses so captivated by his own persona and media presence that there remains no room in their brains for any thought of their own—that you personally wield the power of preventing not only your own contemporaries, but even the rest of humanity destined to replace us on the face of God’s green earth, from coming into the slightest contact with objective, factual reality, let alone the genuine and immutable revelation of Almighty God? I don’t speak Spanish, but in English we have the expression, “You can’t fool all of the people, all of the time.”

You missed it! This article appeared weeks ago in the print-edition of The Remnant. Time to subscribe?

3. The National Socialist movement not only came from somewhere; it went somewhere as well. The fires of the mid-twentieth-century crematoria were originally fueled by the philosophy known as eugenics, but this philosophy per se did not necessarily die down when the camps were forcibly closed. Before the war, certain Germans had become big fans of all that Margaret Sanger was up to, but after they ascended into leadership positions in their own country, they were unwise enough to give civilization a sneak preview of where her type of thinking inexorably leads. That was the reason that, after the war, the organization advocating the creation of Nietzschean Superhumanity by either positive or negative means simply reinvented itself, publicly, as Planned Parenthood instead. So why, Holy Father, are

, and under the aegis of the Church’s own prestige? Your recent comments precipitated by the inauguration of Donald Trump as President of the United States suggest that you are seriously concerned about preventing the possible resurgence of a form of Nazism in our own times, but then again, actions speak louder than words.

4. Are you familiar with the book Icon of Evil, by David G. Dalin and John F. Rothman (NY: Random House, 2008)? If not, you really should be. Its subtitle, Hitler’s Mufti and the Rise of Radical Islam, says it all. The collaboration between the historical world leader you evidently deplore, and the demographic identity of the main group of “refugees” you most highly (percentagewise and rhetorically) favor, is based not only upon their radical ideological affinity, but also upon documented and extensive political collaboration between them. If you are looking to prevent some kind of posthumous victory on the part of the little man with the iconic mustache, how can you champion the cause of his closest allies? Even if you (however improbably) have adopted this stance inadvertently, because of a misguided belief that it is helping the helplessly innocent, it is long past time for you to wake up.

5. You are quite correct to point out that, in Donald Trump’s case as in Adolf Hitler’s as in your own, the mere fact of a leader’s having been elected offers him no final protection against turning out to be a tyrant in the final analysis. To rule in authenticity and nobility is to do so according to the nature and limits of one’s office, rather than trying to wring from it both privileges and outcomes which God Himself does not allow. No political figure, of course, had any right to herd innocent people into concentration camps from which only a fraction of them would ever emerge alive, no matter how effectively he managed to stack his own judiciary and corrupt his own constabulary into telling him and the rest of the world that he was legally authorized to do so. Numbers alone are no indicator of truth; neither numbers of votes, nor numbers of yes-men, nor numbers of those petrified into a culpable silence about what everybody knows is actually going on.

So yes, Holy Father, I absolutely agree that the fact that only a handful of courageous Cardinals, bloggers, bishops and priests are even attempting to hold your feet to the fire about Amoris Footnote 351 makes no moral difference at all. The inscription above the Cross in three human tongues cannot be erased by any human hand, not even the one wearing Peter’s own ring, because Jesus Christ is the King, both now and forever. Do you disagree?
Published in Remnant Articles

[Comment Guidelines - Click to view]
The Remnant values the comments and input of our visitors. It’s no secret, however, that trolls exist, and trolls can do a lot of damage to a brand. Therefore, our comments are heavily monitored 24/7 by Remnant moderators around the country.  They have been instructed to remove demeaning, hostile, needlessly combative, racist, Christophobic comments, and streams not related to the storyline. Multiple comments from one person under a story are also discouraged. Capitalized sentences or comments will be removed (Internet shouting).
The Remnant comments sections are not designed for frequent personal blogging, on-going debates or theological or other disputes between commenters. Please understand that we pay our writers to defend The Remnant’s editorial positions. We thus acknowledge no moral obligation whatsoever to allow anyone and everyone to try to undermine our editorial policy and create a general nuisance on our website.  Therefore, Remnant moderators reserve the right to edit or remove comments, and comments do not necessarily represent the views of The Remnant.
back to top
Last modified on Tuesday, February 14, 2017
Tweet
More in this category: « Pope Goes Gaga For Super Bowl Rad Trads In DC: Bannon, Burke and the SSPX »