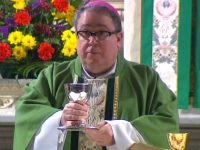 "You do not have permission to have the public celebration of the Extraordinary Form of the Mass" ...Bishop Michael Olson

Fisher More College is the only fully accredited four-year Traditional Catholic College in America. The school is dedicated to the Traditional Latin Mass, which it considers an essential component to its mission of forming the whole person, intellectually, morally and spiritually.   The school’s website explains, the “mission of the College is to ‘cooperate with divine grace in forming the true and perfect Christian, that is, to form Christ Himself.’ (Pope Pius XI, Divini Illius Magistri). … We pray the Traditional Latin Mass and the associated rich Sacred Liturgy that has been passed down to us through the ages. We are certain that fidelity to the usus antiquior is essential to achieving our mission.”

While other Catholic Colleges are being overcome by the winds and waves of secularism and the politically correct agenda of the Left, Fisher More is resisting the ways of the world, and the Modernism shaking the Church, by holding fast to Tradition, which, as Vincent of Lerins said, “cannot be led astray by any lying novelty”.

And the mission of the school is proving successful. While recent polls reflect the dismal state of Catholic education, which has brought in its train a lack of Catholic identity among young adults, Fisher More College stands out as a beacon of light in its Catholic vitality and fidelity to the unchanging teaching of the Church.

Having overcome the seemingly impossible odds thanks to the prayers and generous support from hundreds of Catholics worldwide, the school is now facing another obstacle – one that not only threatens to undermine the school’s mission, but places it future existence at great risk. His name is Bishop Michael F. Olson.

Bishop Olson, who was installed as Bishop of Fort Worth at the end of January, wasted no time in seeking to undermine the Traditional mission of the College. Within his first 30 days, he sent a letter to the College President, Michael King, in which he absolutely forbad the celebration of the Traditional Latin Mass on campus – including Sunday. In flagrant violation of Summorum Pontificum, the Bishop declared:

You may only have the celebration of the Mass in the Ordinary form by priests who explicitly have faculties for such celebration as granted by me as the Bishop of Fort Worth.

A canonical opinion was immediately obtained in response to Bishop Olson’s letter, which confirmed that the new Bishop has no authority to forbid the Traditional Mass. The following is a portion of the formal canonical opinion, as posted on the well-known Catholic blog, Rorate-Caeli:

[N]o bishop has the authority to arbitrarily restrict the celebration of Mass according to the traditional Roman Rite. While the diocesan bishop has ‘all ordinary, proper, and immediate power which is required for the exercise of his pastoral function’ (CIC/83, c. 381, §1), his authority is not absolute.

The faithful have a right, enshrined in ecclesiastical law, to have access to the Mass and sacraments celebrated according to the usus antiquior. Celebration of the traditional Roman liturgy is … a right that can be properly vindicated if requests for such celebrations are not satisfied (cf. SP, art. 7). Prof. Winfried Haunerland, Chair of Liturgical Studies at Ludwig-Maximilians-Universität München, has argued that there is no other document in the Church's history, besides Summorum Pontificum, that has so clearly articulated enforceable rights in liturgical matters for the faithful … .

… With the promulgation of the Instruction Universae Ecclesiae of April 30, 2011, the universal law of Summorum was effectively given teeth: the process of hierarchical recourse may now be utilized by faithful who believe their rights have been violated by a decision of an Ordinary which appears to be contrary to the motu proprio. (cf. UE, 10 § 1)

The recent letter of Bishop Olson to Fisher-More College certainly appears to represent such a decision. Insofar as it has unlawfully restricted the rights of the faithful, the bishop’s administrative act can and ought to be challenged.”

Thanks to Summorum Pontificum and Universae Ecclesiae, the faithful now have recourse when bishops ignore the rights of faithful Catholics by attempting to suppress the Traditional Mass.

And what was the reason given by the Bishop for forbidding the Traditional Mass at the College? In his letter he explained: “I make these norms out of my pastoral solicitude for the students of Fisher-More College as well as for your own soul. I urge you to comply with them”.

So apparently Bishop Olson considers the Traditional Mass to be a danger to souls. In this he is at odds with Pope Benedict XVI, who, in the letter to the Bishops that accompanied Summorum Pontificum, had the following to say to those who consider the Traditional Mass harmful to souls: “What earlier generations held as sacred, remains sacred and great for us too” wrote Pope Benedict, “and it cannot be all of a sudden entirely forbidden or even considered harmful.”   He continued by saying: “It behooves all of us to preserve the riches which have developed in the Church’s faith and prayer, and to give them their proper place”, which is precisely what Fisher More College has been doing by providing the Traditional Mass to its students.

And it is worth noting that the diocese of Fort Worth has the daily celebration of the Anglican Use Mass, which includes prayers written by the 16th Century heretic Thomas Cranmer. How is it that the Traditional Mass, which goes back to the mist of the Apostolic Age, is considered by Bishop Olson to be harmful to souls, while the Anglican Mass is not?  And how can the good Catholics of North Texas have confidence in their new Bishop when he demonstrates such a flagrant disregard for law of the Church, and the rights of faithful Catholics in his diocese, during his first 30 days in office?

Why it is that today, under the specious pretext of “pastoral concern”, members of the hierarchy bend over backwards to accommodate “Catholics” who openly oppose Church teaching, while at the same time trampling on the rights of tradition minded Catholics who “stand fast and hold to tradition”? (2 Thes. 2:14) Is this what Sister Lucy was referring to when she spoke of a “diabolical disorientation of the upper hierarchy?”

Writing at the height of the Arian crisis, St. Basil said: "only one offense is now vigorously punished - an accurate observance of our fathers' traditions.” In our day of diabolical disorientation, history is repeating itself

May Bishop Olson realize the grave responsibility he has been entrusted with, and, rather than trampling on the rights of faithful Catholics in his diocese by illicitly attempting to suppress the Traditional Mass, show himself to be a true pastor of souls.

Published in Remnant Articles
back to top
Last modified on Wednesday, March 5, 2014
Tweet
More in this category: « The Novus Ordo: The Reasons Why... We Resist “It is what it is”—Fort Worth Diocese Clarifies Bishop Olson’s Ban on Traditional Latin Mass at Fisher More College »