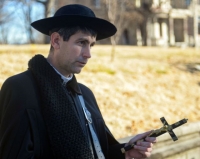 Fr. Lawrence Carney is chaplain to a traditional order of nuns, the Benedictines of Mary, Queen of Apostles, in Gower, Missouri. He visits the community daily to celebrate the traditional Latin Mass, hear confession and offer spiritual guidance. Then he takes to the inner-city streets of St. Joseph in his cassock and wide-brimmed hat to pray the rosary and be a visible presence of Christ and his Church. He has encountered many lost souls on his walks, and successfully brought them back to the Faith. “It’s what Our Lord did,” he reasons. “Many people see me and are moved to come up to me and talk.”

Fr. Carney had the idea to do this after going on the Camino de Santiago pilgrimage in his cassock, and was approached by an estimated 1,000 souls during his 32-day trek. He has continued this unique method of evangelization for over three years in America, and has finally received permission to establish an order to expand the ministry.

Father Lawrence Carney announced in an email (January 23) that after four years of prayer, he has been approved on December 8 to accept men into the Canons Regular of St. Martin of Tours. The new community is based in Saint Joseph, Missouri, in the diocese of Kansas City-St Joseph.

The priest who wears a black cassock and Saturno clergy hat, is engaged in street evangelisation. OurSundayVisitor quotes him, “There’s something mysterious about the cassock; it acts like a magnet, drawing people to you”. READ MORE HERE

REMNANT COMMENT: This is great news indeed, if not particularly surprising. Over the years I've had many opportunities to walk down streets on both sides of the Atlantic in the company of priests in cassocks, and my reaction to this has always been the same: Mother Church surely knew what she was doing when she dressed her sons in a way that made them stand out wherever they went, anywhere on earth.

Priests of the old world were visible to the whole world, wherever they went. They never really "punched out."  And neither did they go into the world incognito, as is the case so often today.  They made themselves approachable by being always willing to "stick out" and stay "on the clock," ready to serve souls.

I can't tell you how many times over the years I've seen native kids in Mexico, tourists in France, hikers in Spain, commuters in European metros, wanderers and street urchins approach my priest friends or Remnant Tours chaplains, asking for everything from a simple blessing to forgiveness for their sins.  Especially in airports. So often, just before a flight is scheduled to take off, a young man will approach the cassocked priest and ask him to hear his confession. It’s such a beautiful thing. Real missionaries of mercy in action, in every traditional priest, all over the world.

What sort of demonic mind conceived of the notion to strip away the identifying habit--the calling card, if you will--of the Catholic priest, thus robbing us all of this visual reminder that God is with us and that His mercy is right there for the asking, sitting in the next train seat down, in fact.

Reminds me of the famous conversion story of Sir Alex Guinness—the outstanding English actor who played Obi-Wan Kenobi in Star Wars (among other far greater but lesser known roles).  He was in France making the film adaptation of G. K. Chesterton’s crime-solving priest, Father Brown. And as he was playing a Catholic priest he was naturally dressed like one, which in those days meant black cassock and clerical beaver hat.

At one point he was taking a walk between shoots but still in costume. He cut through some bushes and then down onto a little lane, where he surprised a local lad making his way home.

Rather than showing any sign of fear at the sudden appearance of the big black-cassocked man, however, the boy trotted eagerly right up to the "priest", took him by the hand and began chatting as they walked down the lane together. In an instant, priest and boy had become father and son.

That demonstration of immediate trust and genuine affection for the figure of the Catholic priest in those days made a deep and lasting impression on Sir Alex Guinness, and in fact helped set him on the road to his eventual conversion to the Catholic Faith. In his autobiography, Guinness notes:

“Continuing my walk, I reflected that a Church that could inspire such confidence in a child, making priests, even when unknown, so easily approachable, could not be as scheming or as creepy as so often made out. I began to shake off my long-taught, long-absorbed prejudices.”

That was a long time ago—long before Vatican II and the disastrous demotion of the Catholic priest to "regular guy".  It was back when priests were proud to dress the part, on and off the Altar of Sacrifice.  After that Altar had been transformed into a table, and the Mass became a Meal -- well, I guess priests decided that if there was no sacrifice anymore there's no real need for priests, either. And so many of them became more or less administrators, and dressed accordingly.

Praise God, Father Carney and so many young priests today are moving back in the right direction where the priesthood is concerned. And this is yet another reason for us to not lose hope and to always keep in mind that the Church is human and divine; the human element is rather in shambles right now, admittedly, but the same cannot be said of the divine element. God will save His Church in His time. And the Father Carney’s out there give us all hope that this will happen sooner rather than later.

[Comment Guidelines - Click to view]
The Remnant values the comments and input of our visitors. It’s no secret, however, that trolls exist, and trolls can do a lot of damage to a brand. Therefore, our comments are heavily monitored 24/7 by Remnant moderators around the country.  They have been instructed to remove demeaning, hostile, needlessly combative, racist, Christophobic comments, and streams not related to the storyline. Multiple comments from one person under a story are also discouraged. Capitalized sentences or comments will be removed (Internet shouting).
The Remnant comments sections are not designed for frequent personal blogging, on-going debates or theological or other disputes between commenters. Please understand that we pay our writers to defend The Remnant’s editorial positions. We thus acknowledge no moral obligation whatsoever to allow anyone and everyone to try to undermine our editorial policy and create a general nuisance on our website.  Therefore, Remnant moderators reserve the right to edit or remove comments, and comments do not necessarily represent the views of The Remnant.
back to top
Last modified on Tuesday, February 6, 2018
Tweet