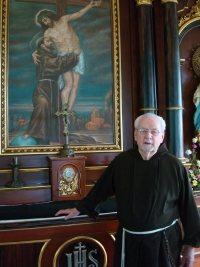 The Pittsburgh Latin Mass Community and the Catholic world lost a dear friend, Father Angelus M. Shaughnessy, OFM Cap., on March 2, 2018 at the age of 89.  He died at 2:15pm while praying the 5th Sorrowful Mystery of the Rosary, the Crucifixion, on a First Friday dedicated to the Sacred Heart of Jesus.  Father Shaughnessy was ordained to the Holy Priesthood on June 4, 1955, a First Saturday dedicated to the Immaculate Heart of Mary.

Father Angelus is perhaps best known for his time at the Eternal Word Television Network (EWTN) in Birmingham, Alabama from 2001 to 2007.  There, he appeared world-wide while serving in the background as the Minister General to the Franciscan Missionaries of the Eternal Word.  Father Angelus had also faithfully served God as a missionary to Papua New Guinea from 1966 to 1980.  Father Angelus was a ‘man of the world,’ but his roots were in Pittsburgh, Pennsylvania.

Born on November 16, 1929 in Rochester, PA (Diocese of Pittsburgh), he was baptized at St. Cecilia Church by a Capuchin priest, Father Hugh Rauwolf.  He attended St. Fidelis College and Seminary in Herman, PA.  On July 14, 1950, Father Angelus professed his vows as Capuchin Friar.

This is what Father Angelus used to tell other Catholics about the Pittsburgh Latin Mass Community:

“Jesus called us His friends because He revealed all the secrets of the Heavenly Father to us.  It seems the best kept secret in our American neighborhoods these days is the presence of Jesus Christ in the Blessed Sacrament.  In so many places He has been:  MINIMALIZED, CASUALIZED, TRIVIALIZED, and sometimes even OSTRACIZED.  How sad to treat the greatest gift of God to us in such a shabby fashion!  There is one place in Pittsburgh where this kind of treatment to the Lord is not the case.  That is in the Latin Mass Community of Holy Wisdom Parish, where the Holy Sacrifice of the Mass is offered in the Tridentine Tradition … The faithful who participate in these Holy Masses truly have a sense of the sacred.  Even the children who come are most edifying.  The choir that sings the High Mass is among the best.”  (from a 1996 Holy Wisdom bulletin)

Various emails in the Pittsburgh Latin Mass Community announced recently that Father Angelus was dying at the Vincentian Home near Pittsburgh.  As soon as I heard, I visited him and extended the Latin Mass Community’s appreciation and promise of prayers.  I asked Father Shaughnessy if he would like to receive the Traditional Latin form of Extreme Unction.  Without hesitation, he agreed and proceeded to make the appropriate responses in Latin.  As prescribed by tradition, I anointed Father’s eyes, ears, nose, mouth, back of the hands (not on the palms for a priest) and feet. Following other prayers, “The Rite of the Apostolic Blessing with Plenary Indulgence at the Hour of Death” was imparted.  Father Angelus had a Brown Scapular.  Before I left, I asked if it would be acceptable to him if I wrote an article about our visit for The Remnant.  He said: “Surely.”

During his life on earth, Father Angelus served the faithful of the Pittsburgh Traditional Latin Mass Community.  At the time of his departure from this earth, and after his death, our prayers and appreciation for him were expressed and will continue.  May we meet again in Heaven, and in the meantime, hold forth to that certain Catholic doctrine that the “Church Triumphant,” the “Church Suffering,” and the “Church Militant,” are always united in the “Communion of Saints.” 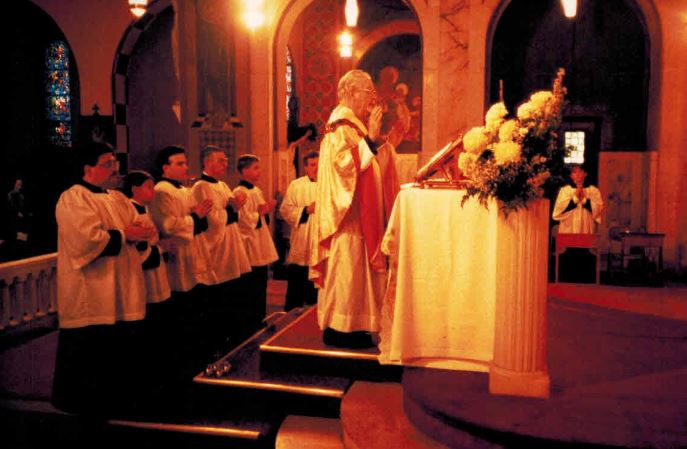 [Comment Guidelines - Click to view]
The Remnant values the comments and input of our visitors. It’s no secret, however, that trolls exist, and trolls can do a lot of damage to a brand. Therefore, our comments are heavily monitored 24/7 by Remnant moderators around the country.  They have been instructed to remove demeaning, hostile, needlessly combative, racist, Christophobic comments, and streams not related to the storyline. Multiple comments from one person under a story are also discouraged. Capitalized sentences or comments will be removed (Internet shouting).
The Remnant comments sections are not designed for frequent personal blogging, on-going debates or theological or other disputes between commenters. Please understand that we pay our writers to defend The Remnant’s editorial positions. We thus acknowledge no moral obligation whatsoever to allow anyone and everyone to try to undermine our editorial policy and create a general nuisance on our website.  Therefore, Remnant moderators reserve the right to edit or remove comments, and comments do not necessarily represent the views of The Remnant.
back to top
Last modified on Monday, March 5, 2018
Tweet
More in this category: « America's Most Violent Come from Broken Homes