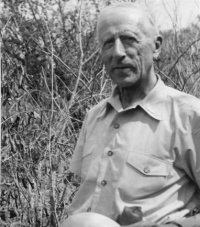 Forget Genesis. Forget Adam and Eve. They did not actually exist. To Teilhard, the universe began from something—a je ne sais quoi, perhaps the God Particle the Cern scientists are trying to isolate. Over eons and eons the universe evolved according to its own inner becoming. His was a reimagined Christianity, and we see it all around us today.

I was in the backyard, scissors in hand, checking my flowers. The roses were in bloom, and I wanted to cut some for the crystal bud vase in my kitchen. I walked over to the largest bush. It was so tall it almost reached the breakfast room window. It dwarfed the bushes on each side.

Why is that one so much bigger than the rest? I wondered as I hurried over to it. When I got closer, I was surprised to see how bare the branches were. There were only a few blooms and fewer buds on the bush. But the thing’s huge, I said to myself. Where are the roses?

Curious, I reached for the tallest stalk. It had leaves and thorns, but no blossoms. Green as the leaves of the floribunda, strong as the stem, and thicker than my thumb, I recoiled when I realized what it was. Although the branches grew beside and within and over the rosebush, the thing was not part of it.

And worse than that, it was choking the life out of the rosebush.

No way! I wasn’t about to let that happen. I attacked the weed with a vengeance. As I yanked and pulled and cut the sterile branches out from my struggling rosebush, the metaphor hit me square in the face.

The plight of the rose and the vigor of the weed are like what’s happening to the Church. A new teaching has taken root. The weed is Teilhardism, and it is killing the rose. It’s sapping its strength and crowding the rose out of its rightful place in the garden. If left alone, it will destroy the rose.

Don’t expect the master gardeners to get rid of it. They love the Weed. They nurture it, extol its beauty, and feed it. Like the courtiers around the emperor with no clothes, they proclaim its magnificence: See the wonder of the Weed! See how lovely the color! See the freshness of the leaves! Smell its fragrance!

Don’t listen to them. Don’t go near it.

Let’s take a look at this thing.

We’re not dealing with known heresies, with denials of certain points of doctrine nor even the serpentine modernism that infiltrates the Church and suffocates her members. We are facing nothing less than a bizarre new religion.

It masquerades as Catholicism, renewed and reclothed for the modern mind—which makes it even more insidious, more difficult to pinpoint and excise. But it’s here, there’s no denying it. The Thing has risen up from the sea of unbelief like the Beast of the Apocalypse ready to devour the Woman.

As I wrote in Against the Wolves [SUBSCRIBE TO THE REMNANT] the new faith was imagined and fleshed out by one man, Fr. Teilhard de Chardin[1], a world-enamored priest rhapsodizing over his baby—a reimagined Christianity. Unlike heretics, Teilhard doesn’t dispute this or that point of doctrine. Unlike schismatics, he doesn’t deny the authority of the Roman Church. No, he simply sidesteps the whole thing. He reinterprets the Faith, then argues from the reinterpretation.

As Mohammedism has no history before Mohammed, so the new religion sprang fully formed from the mind of the rambling Jesuit. Just as Mohammed wove threads from the Old Covenant, early Christianity, and the Arab worship of the moon god Al-Ilah into a cloth called Islam, so Teilhard has sewn a garment of Eastern mysticism, speculative science, and spiritual evolution. Thrown over the Body of Christ, it lies like a shroud over the Church.

Like every heresiarch before him, Teilhard laid out the philosophical roadmap. He ransacked the Sacred Teachings of our Faith, picking out an idea here, a dogma there; and then, like a diabolical sorcerer, he threw them into a cauldron with a pseudo-scientific bouquet of fine herbs and hung the pot over the fire to cook his poison.

His prose soars, his erudition shines, but it’s not Catholic. He twists what we believe, sprinkling the admixture of disputed science and empty theology with lovely Latin phrases and quotes from the masters of the spiritual life.

His disciples (who are legion) extol the brilliance of his work. A reconciliation of theology and science, they proclaim it a faith fit for Modern Man. It’s about Love and Progress and ultimate Divinization. There is no sin--error perhaps, but, no worries, it’s all being caught up in the forward rush of History. “Everything in the world follows the road to unification.”[2]

Teilhard whispers words of encouragement; he offers a new viaticum: “Our spiritual being is continually nourished by the continuous energies of the perceptible universe.”

Distinctions will fall away. The rocks, the rivers, the distant stars, the shimmering moon—all will be swept up in a great transcendent burst of energy. It will be the Parousia, the Second Coming: the revelation of the Cosmic Christ—the divinization of the Universe.

“Men of little faith,” Teilhard shouts, “Why then do you fear or repudiate the progress of the world?...To divinize does not mean to destroy but to sur-create.”[3]

So the World is becoming Christ. 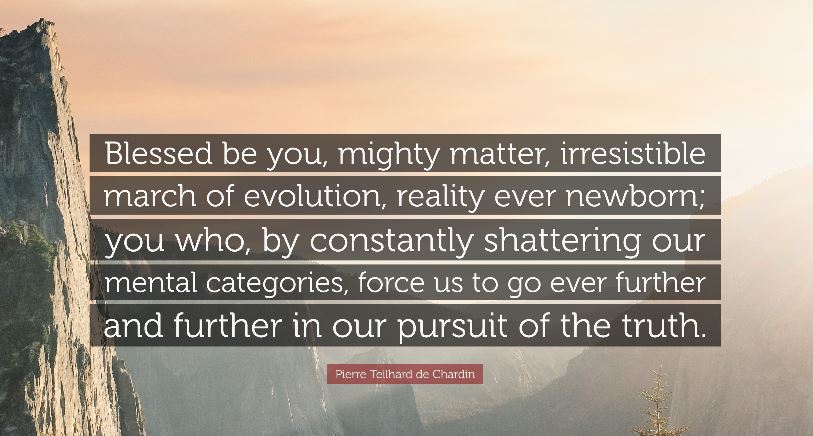 I’m serious. That’s the goal. The Omega Point. Not Heaven or Hell. Not Judgment or Mercy. Where is the Holy Trinity in his work? Where are the Blessed Mother and the saints? Where are the angels?

He even recasts the meaning of the Cross. Sir Julian Huxley, in his introduction to The Human Phenomenon[4], explains it for us: “The redemption of the cross had to be reconciled with the salvation of the world through active co-operation in the building up of the universe.”[5]

The whole thing is a spawn of Hell, a dark system of belief that uses Catholic words, wears the vestments, and light the candles, but there is no truth in it. It is false.

Don’t take my word for it. Pick up his books and read them if you can. They make no sense. Reason has been cast to the wind. Huxley goes on: “Teilhard uses convergence to denote the tendency of mankind, during its evolution to superpose centripetal on centrifugal trends so as to prevent centrifugal differentiation from leading to fragmentation:”[6]

Get it? Everything is converging, everything is unifying. It will all be stuck together by sap. Don’t laugh. That’s what Teilhard calls it. He posits a “positive confluence of Christian life with the natural sap of the universe.”

All things work together, not for the Glory of God and the salvation of souls, but for the realization of the Cosmic Christ. Jesus of Nazareth? Ah, he was just the “historical Jesus,” not the same thing at all. We await the Pleroma, the fullness of time, when in a great burst of something, the entire universe is transformed and the Cosmic Christ revealed.

This is worse than nonsense. There is no salvation in it, no God to adore—only divinized Matter. Evolution is “matter becoming cephalized.” How do you like that? Rocks becoming conscious, lying beneath the Noosphere[7]—that imagined membrane on the earth’s surface, a supposed thinking layer superimposed on the lifeless layer of inorganic matter.

It gets worse. Forget Genesis. Forget Adam and Eve. They did not actually exist. To Teilhard, the universe began from something—a je ne sais quoi, perhaps the God Particle the Cern scientists are trying to isolate. Over eons and eons the universe evolved according to its own inner becoming. Man appeared as an epiphenomenon, conscious, as the whole cosmos someday will be.

Individual salvation is not mentioned. The Second Coming? What’s that? Teilhard would rather call it by the unfamiliar name, The Parousia. That way he can reinterpret it. We don’t have to worry about sin or repentance, virtue or grace. All we have to do is let ourselves be united with the universe. We must not be divisive or contrary. We must not stop this deifying Movement. All will be One. And peace will reign forever.

I’m telling you—if you start thinking this creature can be domesticated, tamed to live peacefully with Tradition, you’re mistaken. This isn’t the time for gentle speech. The beast needs to be driven out of the Church before all the lambs are dead.

It’s not like we weren’t warned. We were taught about the End Times and the Great Apostasy. We were warned of the Antichrist. We were told that hearts would grow cold and people would believe fables.

The world has always been at odds with Truth, but now, a Trojan Horse has entered the City of God and laid waste the fields and the meadows. The fig tree is sterile, and there is no Glory in the Olive.

Archbishop Sheen once said that we are living in the days of the Apocalypse.[8] I think we’re there.

This article appeared in The Remnant some years ago. Subscribe today to stay informed, inspired and involved!

[1] Teilhard de Chardin, S.J., 1881 – 1955.  A French Jesuit, Teilhard was trained as a paleontologist and geologist. His principal works are Le Phenomene Humain, The Mass on the World, and The Divine Milieu. Forbidden by his superiors to publish during his lifetime, his manuscripts were copied and spread by his devotees. His works were published after his death, and the Holy Office issued a monitum against them.

[4] The English translation was once called The Phenomenon of Man but man as a generic term for humanity is not allowed in the modern lexicon.

[Comment Guidelines - Click to view]
The Remnant values the comments and input of our visitors. It’s no secret, however, that trolls exist, and trolls can do a lot of damage to a brand. Therefore, our comments are heavily monitored 24/7 by Remnant moderators around the country.  They have been instructed to remove demeaning, hostile, needlessly combative, racist, Christophobic comments, and streams not related to the storyline. Multiple comments from one person under a story are also discouraged. Capitalized sentences or comments will be removed (Internet shouting).
The Remnant comments sections are not designed for frequent personal blogging, on-going debates or theological or other disputes between commenters. Please understand that we pay our writers to defend The Remnant’s editorial positions. We thus acknowledge no moral obligation whatsoever to allow anyone and everyone to try to undermine our editorial policy and create a general nuisance on our website.  Therefore, Remnant moderators reserve the right to edit or remove comments, and comments do not necessarily represent the views of The Remnant.
back to top
Last modified on Sunday, April 22, 2018
Tweet
More in this category: « Pope Francis: A Pelagian Lutheran Feast of St. Mark, April 25 »