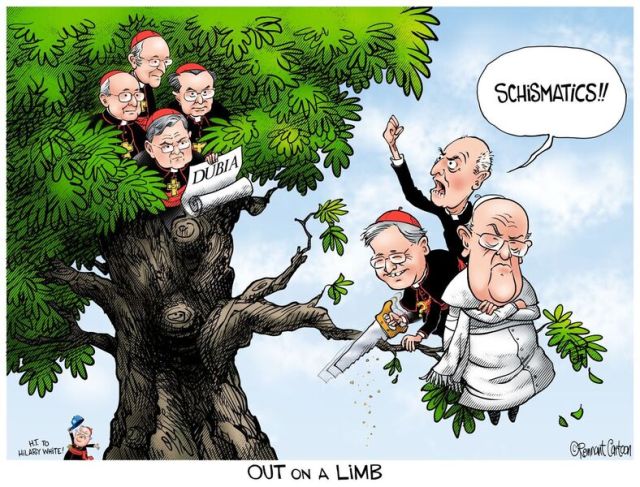 Is he joking?  Francis has steadfastly refused to answer nearly everyone who has fairly criticized him and then positively begged him for a response.

In fact, his trademark refusal to respond to criticism has caused some to argue that Francis' behavior in the face of criticism fits the classic definition of a narcissist, in that he seems incapable of allowing for even the possibility that he might not always be right.

This would explain what appears to many to be a singular lack of empathy for others. Even 90-year-old cardinals who ask questions of this pope are not, as far as he's concerned, entitled to the courtesy of a reply, much less an audience.

Need I go on? And now once again, according to Pentin's report, the Pope is accusing those who criticize him of trying to start a schism:

Vatican II created these things, maybe the best known break is that of Lefebvre. There is always schismatic action in the Church, always, no? It is one of the actions that the Lord always leaves to human freedom. I don’t fear schisms, I pray they don’t exist because there’s the spiritual health of many people [to consider], right? [I pray] there will be dialogue, that there will be correction if there is some mistake, but the path of schism is not Christian.

Can this poor, befuddled man possibly be serious?

Perhaps it's time for an ecclesiastical intervention, as Francis obviously needs help.

[Comment Guidelines - Click to view]
The Remnant values the comments and input of our visitors. It’s no secret, however, that trolls exist, and trolls can do a lot of damage to a brand. Therefore, our comments are heavily monitored 24/7 by Remnant moderators around the country.  They have been instructed to remove demeaning, hostile, needlessly combative, racist, Christophobic comments, and streams not related to the storyline. Multiple comments from one person under a story are also discouraged. Capitalized sentences or comments will be removed (Internet shouting).
The Remnant comments sections are not designed for frequent personal blogging, on-going debates or theological or other disputes between commenters. Please understand that we pay our writers to defend The Remnant’s editorial positions. We thus acknowledge no moral obligation whatsoever to allow anyone and everyone to try to undermine our editorial policy and create a general nuisance on our website.  Therefore, Remnant moderators reserve the right to edit or remove comments, and comments do not necessarily represent the views of The Remnant.
Last modified on Wednesday, September 11, 2019