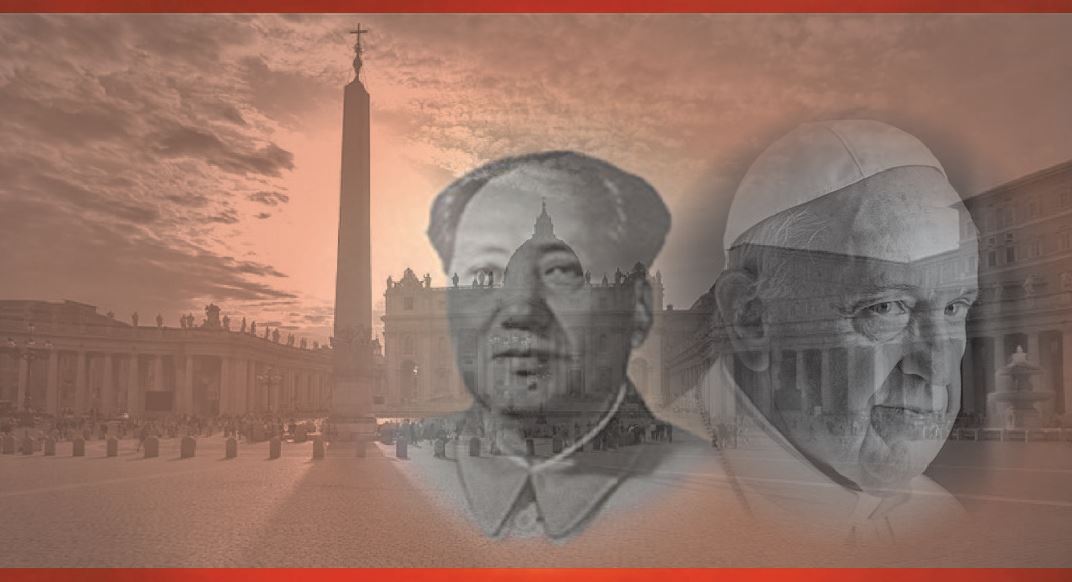 The theme for Francis’ sojourn in Japan, for example, was “Respect All Life”. This sounds pro-life at first, until one remembers that Francis had just gotten done processing a pagan Pangaea idol into St. Peter’s before hurrying to catch his Thai Airways flight to Haneda. As a pro-life leader in Japan remarked to me before Francis arrived, it sounds as though the pope is trying to include some kind of ecological component to what “pro-life” means.

When we march through the streets of Tokyo to speak up for life, we are concerned about human babies. When Francis says “Protect All Life,” he surely means that in the Lion King sense: protect the amoeba and the plankton, the great Pachamama circle of the ecosphere.

But perhaps the most obvious difference between the papal visits to Japan of 1981 and 2019 is in the Vatican’s stance toward communism. To state the conclusion first, John Paul was against it; Francis is for it. How times have changed.

John Paul II was archbishop of Krakow before being appointed to the college of cardinals, and as pope he made it a priority to continue supporting the Solidarity movement in Poland which would eventually topple the communist regime there. After a long period of attempted accommodation with Moscow known as Otspolitik, a policy initiated by John Paul II’s predecessors John XXIII and Paul VI, John Paul II—who had actually lived under communism—knew from firsthand experience that coexistence with Marxist-Leninism was impossible. He worked to undermine communist countries, as well as communist influence on theology, most notably in the form of Liberation Theology.

The fall of the Soviet Union and the collapse of communism across Eastern Europe were caused by a manifold of complex factors, but however one parses causation, John Paul II’s anti-communist stance drew a clear moral line in the sand: Catholics could not keep pretending that one could be both a Marxist and a Christian, or that truckling to atheists with Kalashnikovs was the key to lasting peace.

Stalin, Lenin, Khrushchev, and Beria are all, thankfully, dead. However, nothing good lasts forever. While the Soviet Union is gone, another communist regime, the People’s Republic of China (PRC), is now ascendant. And another pope, just one pontiff removed from John Paul II, is meeting the latest materialist mob-state in a radically different way.

Xi Jinping, meet your new and much more docile Dalai Lama, Jorge. You’ll find him much more agreeable than the other fellow, who wouldn’t keep quiet about all the Tibetans being killed. Indeed, if John Paul was Churchill, then Francis is Vidkun Quisling.

Consider: Francis has signed a concordat with the PRC, allowing the communist regime to appoint bishops, for example, and emboldening Beijing to continue its persecutions of the underground Chinese Church. As if to add insult to injury, it was widely understood that, when Pontifical Academy of Social Sciences chancellor Bishop Marcelo Sánchez Sorondo said in 2018 that “those who are best implementing the social doctrine of the Church are the Chinese,” he was speaking on behalf of Pope Francis. (Francis never publicly contradicted Sorondo or issued a clarification. Like the blazing heresies attributed to Francis by his old friend, the atheist newspaperman Eugenio Scalfari, Sorondo’s outrages apparently do not even warrant a papal YouTube video of condemnation.)

Far from confronting communism, then, as John Paul II did, the current pope is anxious to find a modus vivendi with it (or, at least, a modus non moriendi, as the original Ostpolitik was framed). This was painfully obvious during Francis’ autumn tour of the Land of the Rising Sun.

Even though Francis arrived in Japan as the brave Hongkongers, largely under the spiritual “umbrella” of the intrepid Cardinal Zen, were fighting to rid themselves of the communist menace encircling them, Francis said not one word in support. Indeed, Francis has sold the Chinese faithful out in spite of Cardinal Zen’s repeated and public condemnations of the godless regime in Beijing.

Also, Francis said nothing while in Japan about Taiwan, a free and prosperous country where the faithful attend Mass and minister to their countrymen and women without fear of government crackdown. The Taiwanese Catholics have been waging a heated battle against same-sex “marriage” on the island, and a word from Francis would have been a tremendous boon to those on the front lines of fighting for a sane society.

Francis, of course, was silent.

But this is not the worst news for the Church in Asia. There are now signs that Francis is grooming Manila archbishop Luis Cardinal Tagle—“the Asian Bergoglio”—to be his successor. 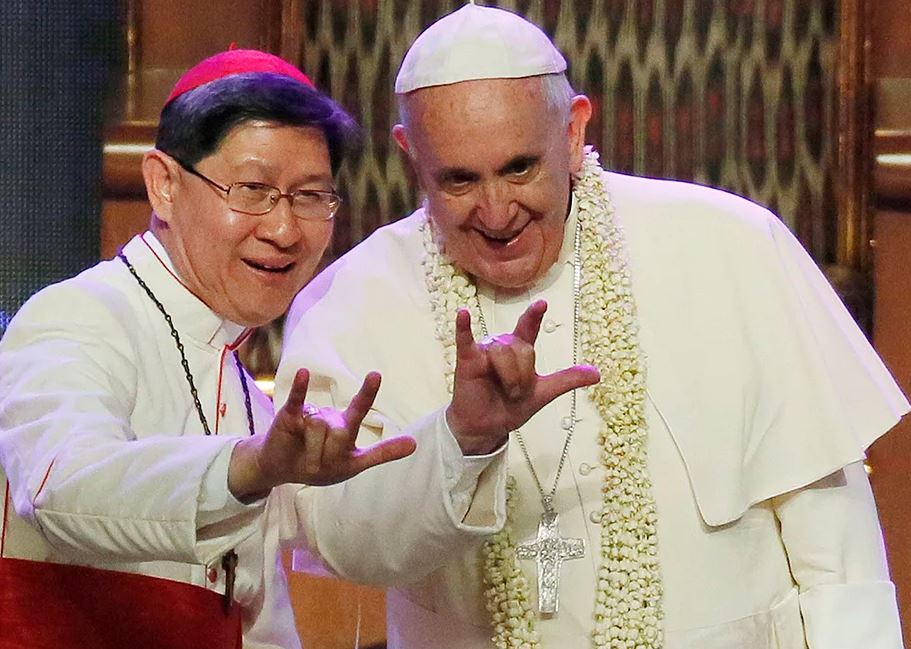 All ya need is love, boys!

According to the National Catholic Register, Francis has promoted Tagle to head the Congregation for the Evangelization of the Peoples, and is apparently even preparing to elevate the Congregation to an even higher status within the Curia. The Remnant reported on Tagle more than a year ago, when the dancing cardinal boogied down (as cardinals do, in accordance with their dignity as princes of the Church) with some unsuspecting young people at the Synod for Youth in October, 2018.

If it is true that Saturday Night Tagle is, indeed, the hot papabile item of the moment, then Francis’ visit to Japan should be seen as a move to shore up Tagle’s powerbase in Asia. Why Asia? Francis’ shameful subservience to the Latter Day Maoists makes it obvious. China, enslaved by the Chinese Communist Party, is where all the people are.

It’s not just a huge market for iPhones. Francis sees a tremendous business opportunity for the Vatican in the Middle Kingdom. If it means selling legions of faithful, suffering Catholics down the river, then so be it. Recent news reports have reiterated that the Vatican is in the red, hemorrhaging cash and lurching from one billion-dollar-settlement sex scandal to the next. It takes money to fund fawning biopics about flamboyant gay men, after all, and Francis needs to find someone to pick up the tab (not least so that the Lavender Mafia will have something to watch on Netflix).

Unfortunately, the trans-Atlantic money spigot is drying up. Vatican II killed the Church in Europe and is just about done with North America, too. (Just thirty-one percent of American Catholics believe in the Real Presence—truly a champagne moment for the Sankt Galen group.) With faith like this, who needs apostasy? One by one, Massgoers will make the logical decision to stay home and watch the Packers game rather than go out in the cold for some “symbolic” crust of bread. Within a generation, the Novus Ordo mess of pottage will generate nary a farthing for Rome from the Lost Lands of Civilizational Suicide.

As the Church in the West enters into the litigation phase of the almighty state’s takeover of the Vatican II placeholder Church, Francis has seen the opportunity to cut a much better deal with the Asian overlords. The Chinese offered him full capitulation up front, no money down. For that, Francis can pass the plate all he likes, so long as he doesn’t say anything untoward about atheism (not that anyone was worried anyway). 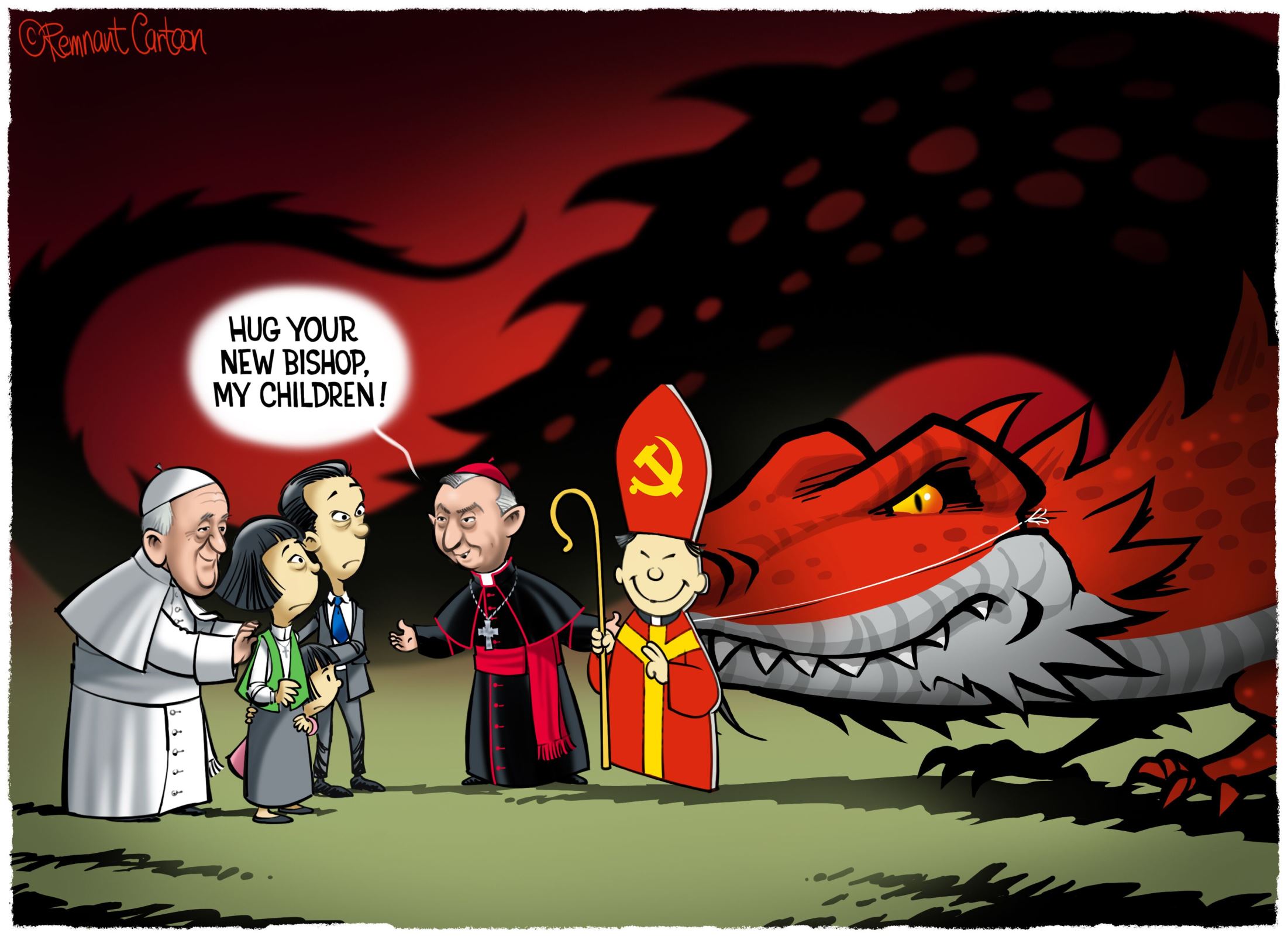 What this hamfisted “pivot to Asia” is, is nothing less than a not-so-subtle replacement of spreadsheets for the sacraments, statistics for the Magisterium. Francis sees the Church as a money-generating collective and a for-hire ideology-laundering operation, and, by Greta, he’s going to crank the till until the handle falls off.

To be blunt, the potential butt-to-pew ratio in China is off the charts compared with, say, demographically shriveling Denmark. And anyway, Francis’ brand of “spiritual-but-not-religious” Catholicism, which he schlocks by the shovelful to any Davos member willing to pay a premium for it, is tailor-made for the Beidaihe crowd.

Consider Francis’ MO thus far, and marvel at how well this is going to play in Tiananmen Square. Have some God-mocking globalism that needs sprucing up so the rubes will buy in? Francis can help! He’ll show up in his white robes (which he apparently sees as a kind of employee uniform) and make your soul-sucking transnational predatory crony-capitalist scheme appear halfway respectable!

Better yet, have a murderous communist gulag-state where forced abortion is the national pastime and concentration camps are as common as Walgreens in Kentucky? Francis will gladly have his picture taken with your dictator for that hard-to-come-by aura of legitimacy that only a pontiff can impart. (What’s more, you can count on Francis not to mention that time when you ground your own people under tank tracks. “Who am I to judge?”©®)

But whereas these are one-off operations, Francis’ visit to Japan reveals that the Vatican as a whole is now programmatically a Cathommunist organization. The East is Red, and the Vatican is, too! And not just “in the red,” but full-on collectivist à la Friedrich Engels. What is needed is to keep the proletariat cycling through the turnstiles. Any old teaching will do. Where once the Mass meant “Ite, missa est,” now it means “massify the hoi polloi,” all while keeping the Church inoffensive to the state and the Vatican financial apparatus in business for another day. If doctrine gets in the way, ignore it. Better yet, make new doctrine. Aggiornamento!

In other words, Francis’ visit to Japan was the equivalent of knocking on China’s front door. The Rome-Beijing Axis is coming, and that unholy alliance is going to fill the Vatican’s coffers again—all while destroying whatever moral authority might have been left in the Novus Ordo Church.

[Comment Guidelines - Click to view]
The Remnant values the comments and input of our visitors. It’s no secret, however, that trolls exist, and trolls can do a lot of damage to a brand. Therefore, our comments are heavily monitored 24/7 by Remnant moderators around the country.  They have been instructed to remove demeaning, hostile, needlessly combative, racist, Christophobic comments, and streams not related to the storyline. Multiple comments from one person under a story are also discouraged. Capitalized sentences or comments will be removed (Internet shouting).
The Remnant comments sections are not designed for frequent personal blogging, on-going debates or theological or other disputes between commenters. Please understand that we pay our writers to defend The Remnant’s editorial positions. We thus acknowledge no moral obligation whatsoever to allow anyone and everyone to try to undermine our editorial policy and create a general nuisance on our website.  Therefore, Remnant moderators reserve the right to edit or remove comments, and comments do not necessarily represent the views of The Remnant.
back to top
Last modified on Tuesday, December 17, 2019
Tweet

More in this category: « Christmastime News and Specials from The Remnant Here's Exactly Why They're Impeaching Trump »