Viganò on 2020 Pontifical Yearbook: Did Pope Francis abandon the title 'Vicar of Christ'? 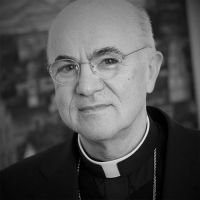 “YOU HAVE SAID SO”

“Truly, I say to you, one of you will betray me.”
And they were very sorrowful, and began to say to him one after another,
“Is it I, Lord?” He answered, “He who has dipped his hand in the dish with me, will betray me.
The Son of man goes as it is written of him, but woe to that man by whom the Son of man is betrayed!
It would have been better for that man if he had not been born.”
Judas, who betrayed him, said, “Is it I, Master?”
He said to him, “You have said so.”
Mt 26, 20-25

On March 25, the 2020 Pontifical Yearbook was published with a real novelty. It may seem like a typographical trifle, in the part dedicated to the reigning pontiff, but this is not the case. Until last year, in fact, Francis’s titles were listed at the top of the page, beginning with “Vicar of Christ”, “Successor of the Prince of the Apostles” etc., and ending with his birth name and a very brief biography.

In the new edition, on the other hand, the secular name JORGE MARIO BERGOGLIO stands out in large letters, followed by the biography, the date of election and the beginning of his “ministry as universal Pastor of the Church.” Separated by a dash and the words, “Historical titles,” all the titles of the Roman Pontiff are then listed, as if they were no longer an integral part of the Munus Petrinum that legitimizes the authority which the Church recognizes in the Pope.

This change in the layout and content of an official text of the Catholic Church cannot be ignored, nor is it possible to attribute it to a gesture of humility on the part of Francis, which is not in keeping with his name being so prominently featured. Instead, it seems possible to see in it the admission — passed over in silence — of a sort of usurpation, whereby it is not the “Servus servorum Dei” who reigns, but the person of Jorge Mario Bergoglio, who has officially disavowed being the Vicar of Christ, the Successor of the Prince of the Apostles and the Supreme Pontiff, as if they were annoying trappings of the past: only mere “historical titles.”

In 2019 (left), the page on reigning pontiff opens with words: “VICAR OF JESUS CHRIST.”
2020 edition (right) opens with “JORGE MARIO BEGOGLIO” and lists “Vicar of Christ” under “historical titles” below. 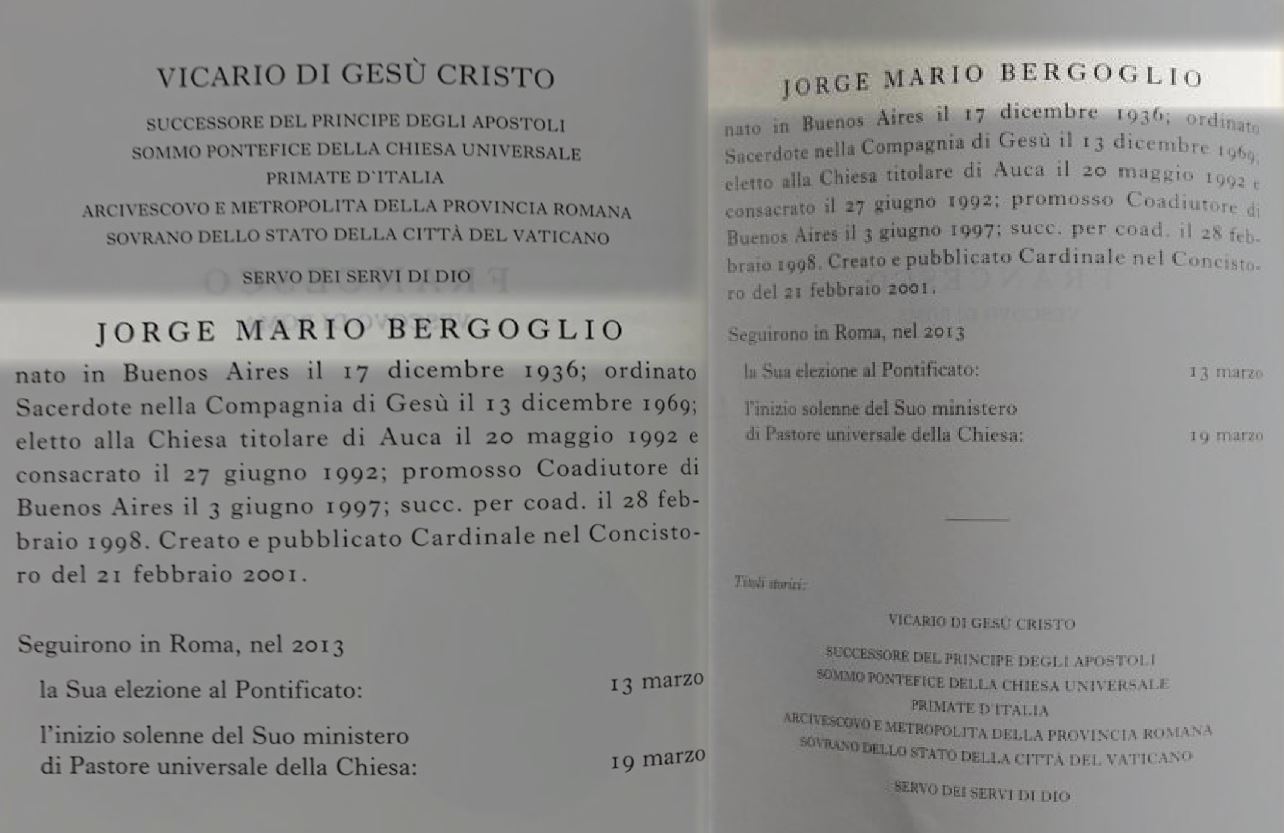 An almost defiant gesture — one might say — in which Francis transcends every title. Or worse: an act to officially alter the Papacy, by which he no longer recognizes himself as guardian, but becomes master of the Church, free to demolish it from within without having to answer to anyone. In short, a tyrant.

May the significance of this most serious act not escape pastors and the faithful, for by it the sweet Christ on earth — as St. Catherine called the Pope — releases himself from his role as Vicar to proclaim himself, in a delirium of pride, absolute monarch even with respect to Christ.

We are approaching the sacred days of the Savior’s Passion, which commences in the Upper Room with the betrayal of one of the Twelve. It is not illegitimate to wonder whether the understanding words with which Bergoglio tried to rehabilitate Judas on June 16, 2016 were not a clumsy attempt to exonerate himself.

This chilling thought is further confirmed by the terrible decision to allow an almost universal ban of the public celebration of Easter, for the first time since the Resurrection of Our Lord Jesus Christ.

[Comment Guidelines - Click to view]
The Remnant values the comments and input of our visitors. It’s no secret, however, that trolls exist, and trolls can do a lot of damage to a brand. Therefore, our comments are heavily monitored 24/7 by Remnant moderators around the country.  They have been instructed to remove demeaning, hostile, needlessly combative, racist, Christophobic comments, and streams not related to the storyline. Multiple comments from one person under a story are also discouraged. Capitalized sentences or comments will be removed (Internet shouting).
The Remnant comments sections are not designed for frequent personal blogging, on-going debates or theological or other disputes between commenters. Please understand that we pay our writers to defend The Remnant’s editorial positions. We thus acknowledge no moral obligation whatsoever to allow anyone and everyone to try to undermine our editorial policy and create a general nuisance on our website.  Therefore, Remnant moderators reserve the right to edit or remove comments, and comments do not necessarily represent the views of The Remnant.
back to top
Last modified on Thursday, April 9, 2020
Tweet