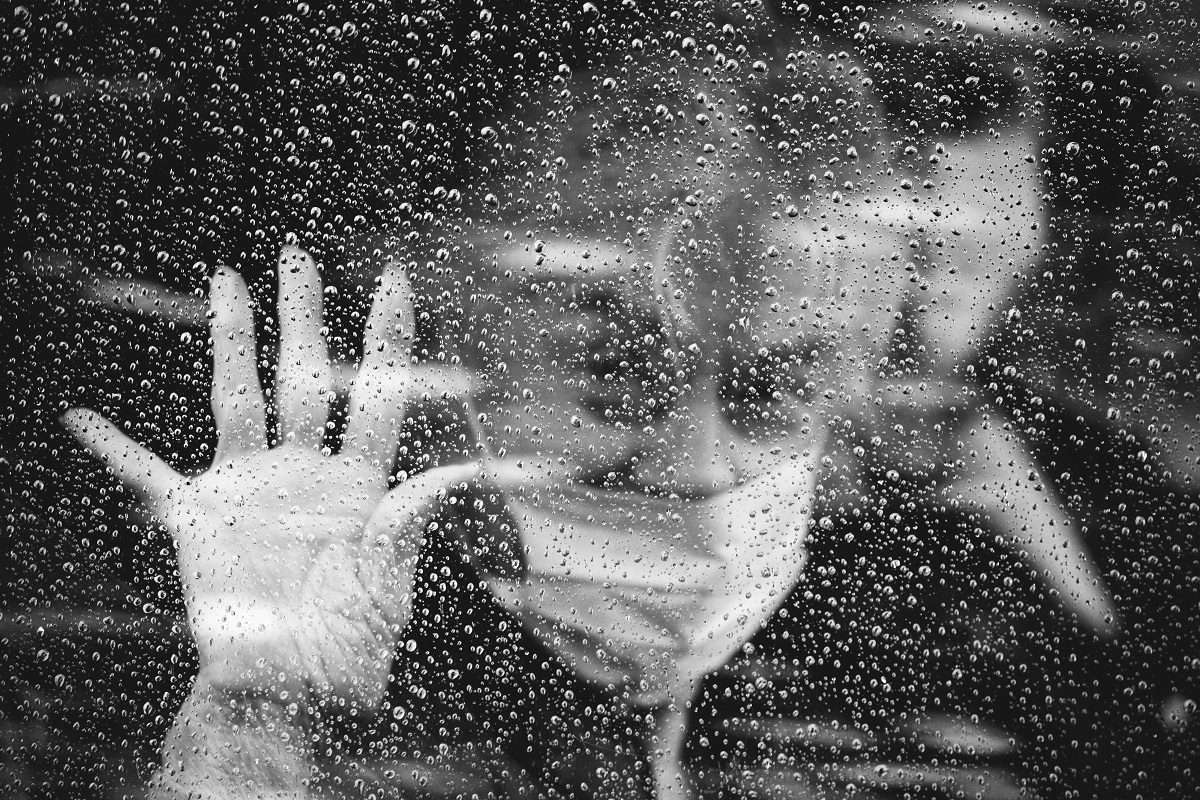 It was Friday. My husband and I were sitting at the table, eating clam chowder and tuna melts when the alarms on our smartphones blasted through the house. The little flip phone I use for actual conversations beeped, then sent an ominous text: Emergency Alert. Imminent threat. Emergency. Over and over the terrifying words crawled across the tiny screen.

Had we been bombed? Was there a tornado? No, it was nothing like that. It was Gretchen Whitmer, the governor of Michigan. The noise stopped. Her disembodied voice filled the kitchen: The stay-at-home lockdown had been extended for two more weeks.

That was it? I was furious. How dare she misuse the emergency signal to issue her latest decree! Every single phone in Michigan was sounding an alert at the same time.  No matter what anyone was doing, no one could avoid it; no one could escape the imperious command. Our phones weren’t even turned on! Why would she do that?

This is not only about disease. It has a lot to do with words and psychological manipulation. Something nefarious is going on here, and the virus is a convenient means to an end.

The disease is real, obviously. Some people die. Some people become very sick. No one disputes that. As our pastor once said, People die, you know. … But people have gone way beyond taking normal precautions to protect their health. They’ve been pushed into a panic. Headlines scream; newscasters look funereal.

Sure, that sounds terrifying, but take a step back. Look at the number of deaths in America from any cause. That will keep those figures in perspective.

Why the hysteria? They say it’s very contagious. Well, so are hepatitis-A, viral pneumonia, and bacterial meningitis. So are strep throat, ringworm, giardiasis. Maybe they should figure out how to test everyone every day to make sure no one can infect anyone with anything. Maybe they can forestall death that way.

They say it’s deadly. But the death rate of this particular corona virus isn’t appreciably higher than what occurs during a severe flu season. If you’re in one of the “vulnerable” categories (like the “elderly”), you’re at risk for all sorts of deadly diseases, not just this one. Do we isolate old people forever lest somebody contaminate them?

They say it has no cure. Well, neither does the flu. The CDC reports that as many as 20 percent of the people in the United States have the flu every single year.[1] That’s over 6,000,000 “cases” in this country. [2] And tens of thousands of people die. Do they close restaurants and gyms every flu season? Do they ban Mass every winter?

The way they talk, you’d think mere exposure to the coronavirus meant immediate death. You’d think people were dropping dead on the sidewalk, hemorrhaging from the eyes and ears on every street corner. You’d think there was a valid reason that Catholic people had to die without Last Rites or bury their dead without ceremony or mourners.

But beware! Be afraid! The virus is everywhere! You can’t see it. You may be sick and not know it. You might be a carrier, murdering hundreds of people just by breathing. It’s a pandemic, they say with trembling voices, making people think that the word pandemic means lethal. It doesn’t. It means an epidemic has spread across many places. It’s not the plague.

The word-weaponry continues. Have you noticed the virus has a new name? It’s not called coronavirus, because that is not specific enough. People now know, having been suitably instructed by the government-appointed experts, that there is a whole host of coronaviruses. So quash the word corona. It can’t be called the Chinese virus or the Wuhan virus either, because that targets a geographic location, a place on Earth that one could point out, identify. It would also mean that the virus has a verifiable physical beginning. It would acknowledge an initial point of departure before it spread like a common cold across the planet. People would realize that the life of the virus is not everlasting. It is finite, self-limiting.

Therefore, in order for the disease to be properly feared, the virus has to sound worse. It has to have an abstruse designation that has no linguistic root. It has to sound as though it is the result of years of research and laboratory testing. It could be an abbreviation, perhaps, letters and numbers cobbled together to destroy and crush the word’s original meaning. That technique is remarkably useful, because then the name can be recast, reinterpreted, and used for another purpose. Unless one knows the code, the history cannot be traced.

They’ve come up with a good one. It didn’t take long. The acceptable name now is COVID-19: CO from corona, VI for virus, D for disease, -19 for the year it emerged. See how much better that sounds, how important, how serious. Yet, even that is not enough. It’s not exact. COVID-19 is the name of the disease; the virus has another name: SARS-CoV-2. Do you follow that?

I’m afraid I don’t speak their language. For me, a non-scientist, it’s a bunch of mumbo-jumbo. But let’s break it down and attempt to ascertain its logic. In 2002-2003, SARS-CoV caused an outbreak of severe acute respiratory syndrome. (That’s what the SARS part stands for.) But SARS-CoV is not the same virus as SARS-CoV-2.[3] It’s different.

Why does it have the same name, then? How is it different? Does the mere number -2 change its essence? I guess it must be part of the parade of Corona viruses…neatly arranged in numerical order.

The problem is that when the scientific words are used outside their proper realm, people don’t really know what they mean. They don’t know their etymology or their application. And that’s embarrassing. No one wants to admit that. For most people, ignorant means stupid. So they nod and talk about The Virus as if they know what they’re talking about. That’s how everybody can be fooled, flummoxed, and misled.

This article is a preview of the May 15th Remnant Newspaper.
Don't miss the rest! SUBSCRIBE TODAY 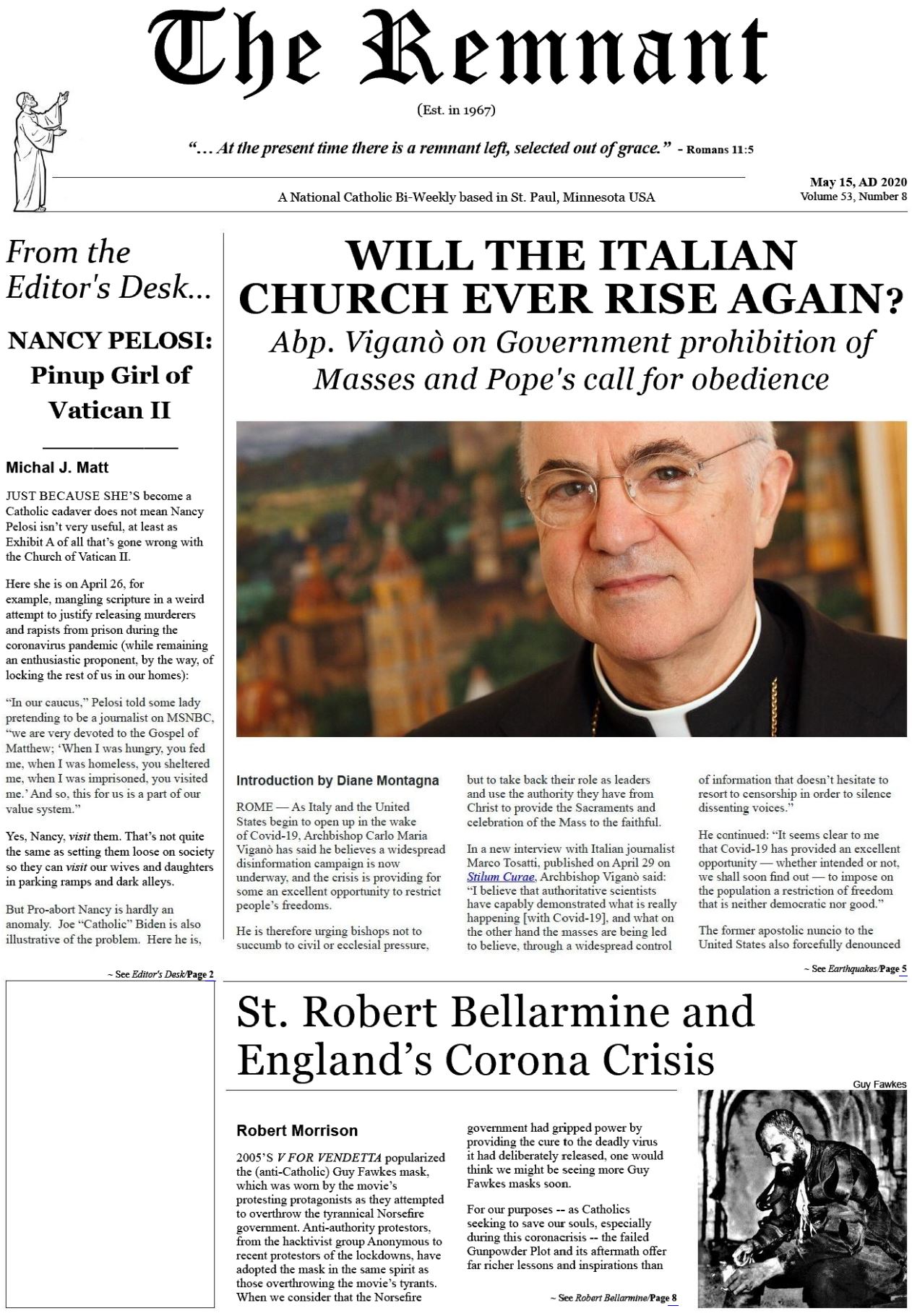 That’s what’s happening to us. Not only words but statistics, charts, projections, and solemn pronouncements by the scientists are used to manipulate and obfuscate.

Take off that mask that hides the nobility of your face. How much good is it doing?[4] Step back, and ask yourselves: What is the reason for these onerous restrictions, this strange, unprecedented lockdown of businesses and isolation of healthy people? Why are there huge billboards on the expressway ordering the people: “STAY HOME, STAY SAFE”? Why are playgrounds cordoned off with yellow ribbon like crime scenes? Why are we subjected to endless affirmations: Together. We’re in this together? Together in what, I ask?

Why the silly white ribbons in honor of our “heroes on the front lines,” the medical professionals?  Certainly, their work requires dedication, commitment, courage even, but that’s their job! There are risks involved and high skill.  That’s why they are held in such high regard--always, not just now. That’s why the best of them are revered. But let’s not use the word “hero,” or, worse, “superhero.” Their lives are not in imminent, immediate danger. They can take precautions, protect themselves.  They know how to do that. They are doctors and nurses, after all. They face disease and death every day. They have no illusions about it. Nobody’s being shot at here.

Just like the emergency alert, the word “hero” is misused. It diminishes and demeans true heroism—the man who dives into icy waves to save a drowning child, a woman who runs in front of a speeding car to push a little girl to safety, a soldier who takes fire so his platoon can be saved.  The word is a ruse, a convenient ploy.

The reason is clear. Under the guise of keeping us safe, we are being deceived, misled and corralled. But why?

I’m a psychologist, trained to look for hidden motives and unresolved conflicts. Shine a light on them, my clinical professor used to say. So, let’s do that.

The obvious truth is, we’re under attack. Every aspect of our humanity is being assailed. The assault is severe, and it’s happening on several levels: psychological, linguistic, physical. Why? It is to transform us, change us, make us fit subjects of an emerging Singularity, a refit universe. Get in step, follow along, or be locked up in your house forever. We’re being herded, frightened, ordered about, our rights ignored, our Christian prerogatives trampled.

We’ve got to stop listening to these totalitarian overlords. Their vision is lethal.  For there is no truth in their mouth; their heart is vain.[5] It’s not just our economy that’s being destroyed. It’s our society, our purpose, our ability to make our own decisions about safety and health. It’s not just the curve of the virus that’s been flattened; it’s our ability to respond, to think, to order our lives.

This is more than the establishment of a New World Order. It is something far worse than modernism, pantheism, or communism. We are witnessing the deliberate reshaping of humanity—biological, psychological, spiritual. Concordant with Teilhard’s dream of the ultimate divine unification of the cosmos, we are being forced into an engineered evolutionary projectile. We are witnessing the emergence of Transhumanism, fruit of the apostasy, genome of synthetic man.

Transhumanism is defined as “a class of philosophies of life that seek the continuation and acceleration of the evolution of intelligent life beyond its currently human form and human limitations by means of science and technology, guided by life-promoting principles and values.”[6]

This is far more deadly than a virus.

The Enemy is behind this. It’s never been so apparent that our wrestling is not against flesh and blood.[7] Behind the earthly evil doers stand the fallen angels. The spirit of Antichrist blows over the world. It’s time to wake up. The rulers of the realm of darkness are waging war on the City of God. We’d better get ready, put on the armor of God, because otherwise, we’re doomed.
________________

[3]www.cleanlink.com/news/article/SARS-CoV-2-and... As the name indicates, this virus is genetically related to the SARS-associated coronavirus (SARS-CoV) that caused an outbreak of severe acute respiratory syndrome (SARS) in 2002-2003.

[4] A standard surgical mask will only be 60%-80% effective in blocking a Coronavirus. Even an N-95 mask is only about 90% effective. A surgical mask has pores on average of 3 microns. The Coronavirus proper is .1 microns in size. Even when encapsulated as an aerosol, those airborne droplets range from .2 microns on up to about 4 microns.

More in this category: « ‘Appeal for the Church and the World’: A Catalyst for Honest Debate LOCKDOWN on LIFE: Holding America Hostage »