The Opiate of the Missus 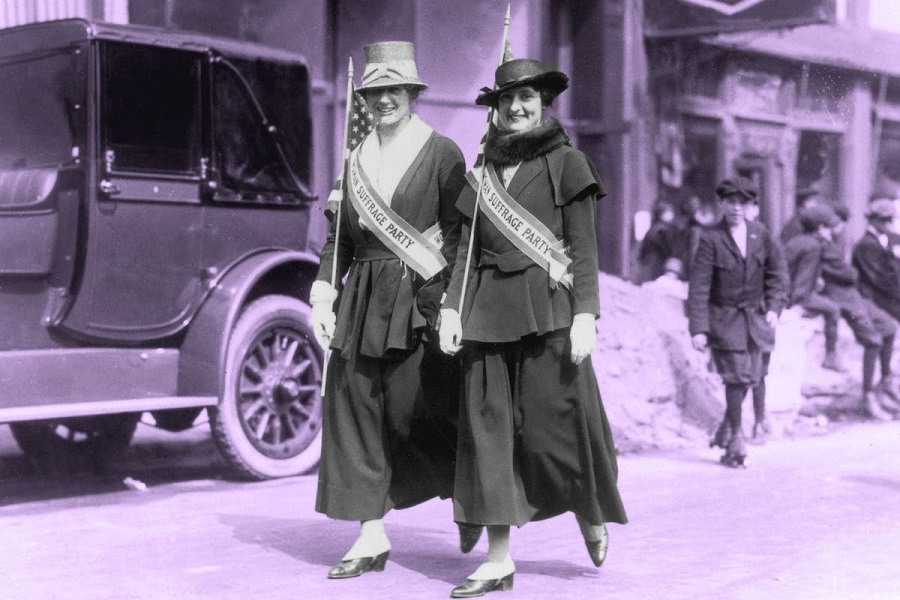 It was one hundred years ago this month that women in the United States obtained, as a matter of constitutional amendment, the guaranteed right to vote in state and national elections. With the passage of the Nineteenth Amendment on August 26, 1920, females joined their male counterparts in being able to cast ballots for the candidate of their choice.

If, like me, you attended public school, you were probably taught that the Nineteenth Amendment was a grand victory for equality and a triumph against the forces of chauvinism and reactionary darkness which have kept this country in chains since the age of Virginia Dare.

The premise on which the Nineteenth Amendment rests is political equality. But stop right there, because this is where the whole problem lies. Political equality—as understood by the Enlightenment revolutionaries who wrested control of the English colonies from the English king and set up an ideological, and not an organic and traditional, polity in its place—is the sleight of hand by which the human person is transformed into an object of government.

Political equality is the opiate of the missus, the narcotic of division and conflict which turns the loving wife and mother into the enemy of men first, and eventually of all other women as well. Political equality, realized strikingly with the passage of the Nineteenth Amendment, signals the demise of woman and the rise of just another group vying in the arena of identity politics. What is special and tender about women is hardened and fixed via political equality. Women fight for rights and in the language of rights—and because rights is the language of Satan, who as Milton tells us relishes his political equality in Hell—women who are politically equal lose the ability to nurture and love as they were designed to.

This is not as our Creator intended. Under the Biblical view of mankind, everyone has equal dignity in the eyes of God. But any glance through the pages of the Bible will show that not everybody has the same station in life. Everyone is free to do the good, regardless of who he or she is in social terms. This is who we are, seekers after the good in accordance with our place in the universe God made for us. Equality is sought out here, in the wholeness of the moral paradigm of the human person. We are all equally children of the Most High. Our station in this life is largely accidental, and our happiness comes in carrying out our role, whatever it is, as best we can for the greater glory of God. Our dignity is equal because God is sovereign over all.

Political equality, by contrast, is not an expression of equal human dignity. It is an inversion of it. As Hannah Arendt pointed out, it was Thomas Hobbes who worked out a vision of political equality which set the stage for the triumph of the bourgeoisie. Hobbes’ starting point for society was anti-society, the state of nature, of atomistic and endless civil war. The solution was equality under threat of violence. Everyone had an equal political weight, because otherwise there would be a relapse into chaos. The goal of all of this was the creation of a post-Christian, utterly materialistic society—precisely the society we see every day when we go outside in 2020.

Political equality does not fulfill, or even enhance, the potential of the human person. Political equality is the ideology which destroys all individuality and breaks a human being down into a mere automaton of political function. The politically-equal subject votes, and that is all. Everything else is superfluous and wherever possible must be eliminated. Humanity gets in the way of political equality and so is usually discarded, down to the bare biological minimum necessary to continue voting and paying taxes. “Seeing like a state,” this is who we are. The state looks at the human person in the same way that a chicken farmer looks at a chicken.

There are debates and varying opinions allowed under some left-variants of the social contract ideology which dominates Europe and North America, but, as we have seen in abundance with the rise of Twitter and Facebook and the embrace by American authoritarians of the Beijing model of civil society, debate and intellectual diversity are very much luxuries which need not be included for a given society of political equality to function. The end goal of political equality is the destruction of religion and the neutering of the human person. In the People’s Republic of China, everyone is politically equal. In the Soviet Union, everyone was politically equal. The leaders of those places are exempted, of course, but that is precisely the point. Political equality is the ruse by which the masses police themselves and insist that everyone be leveled into a smooth plank of political lumber, easily sawed and joined into whatever shape the elites desire.

If chickens had minds and Twitter accounts, they would not need to be kept in cages. They would doxx one another into nearly perfectly uniform conformity.

To return to the American example, if you had the rights of Englishmen, you would not have to suffer the tyranny of the mask police. But you do not have those rights. You are all equal. Which means you are all identically enslaved.

It was not until the nineteenth century that Americans began experimenting with how political equality would look, not as a political leveler of voters, but as a leveler of the entire scope of humanity. Susan B. Anthony and Elizabeth Cady Stanton, along with a growing chorus of giddy men, looked to the new suffragist movement as an advancement of the cause of political salvation which the American Revolution had established as the true national religion of the United States. Political equality began to whisper in the ears of some that even the differences between the sexes ought to be eliminated so that human beings might finally be free.

As the political equality movement for women gained steam, though, women began to suffer more than they ever had in the past. The patriarchy which nearly every girl in the USA has now been taught to hate by her public school teachers used to be considered a very good thing. The world can be harsh and men, if they are to be considered worthy of the name, must protect women. Political equality targets this natural male sentiment to care for women and severs the human bonds of friendship and love between the sexes. In the Supreme Court case of Muller v. Oregon of 1908, the state still preserved a vestigial regard for the inherent physical weakness of women vis-à-vis men. In later Supreme Court cases, the true misogyny of the equality regime could no longer be hidden. Today, the state encourages women to contracept against new life within her, to kill any new life that slips through, and, ideally, to give up femininity altogether and become neutered angry lever-pullers for the state’s eternal voting machine.

Let us not forget that the American suffragettes’ English forebear, Mary Wollstonecraft, wrote her famous book on the rights of women in the same year in which she personally witnessed the beheading of Louis XVI of France. The crowd clamored for liberty and fraternity as they guillotined their sovereign. What they craved most in their madness, however, was the third term: equality. With the king gone, rank was to go with him. Wollstonecraft lived a miserable life. She was, without doubt, the equal of men.

In 2020, there are surely few in the United States who question that the Nineteenth Amendment was a great triumph for women. The young women at American universities are encouraged to celebrate their equality by hooking up with countless partners for meaningless physical encounters. Marriage is mocked unless a woman chooses to “marry” another woman. Transgenders are now warring openly on lesbians, however, encroaching on the political equality that Anthony, Wollstonecraft, Stanton, and a host of others won for their sisters in centuries past.

Now politically equal, women, too, may be sent by the state to their death in wars of endless conquest. Your daughter may now go get mangled in Central Asia. Not for the greater glory of God, of course. For the greater glory of Leviathan. Thomas Hobbes advanced political equality to keep civil war under a heavy lid. The civil war, the warre of all against all, simply metastasized, via the very concept of the equality meant to contain it, and destroyed the human person by turning love into hate, religion into blasphemy, women into men, men into children, mothers into murderers, and all, alike, into equally helpless tools of the government.

[Comment Guidelines - Click to view]
The Remnant values the comments and input of our visitors. It’s no secret, however, that trolls exist, and trolls can do a lot of damage to a brand. Therefore, our comments are heavily monitored 24/7 by Remnant moderators around the country.  They have been instructed to remove demeaning, hostile, needlessly combative, racist, Christophobic comments, and streams not related to the storyline. Multiple comments from one person under a story are also discouraged. Capitalized sentences or comments will be removed (Internet shouting).
The Remnant comments sections are not designed for frequent personal blogging, on-going debates or theological or other disputes between commenters. Please understand that we pay our writers to defend The Remnant’s editorial positions. We thus acknowledge no moral obligation whatsoever to allow anyone and everyone to try to undermine our editorial policy and create a general nuisance on our website.  Therefore, Remnant moderators reserve the right to edit or remove comments, and comments do not necessarily represent the views of The Remnant.
back to top
Last modified on Monday, August 3, 2020
Tweet