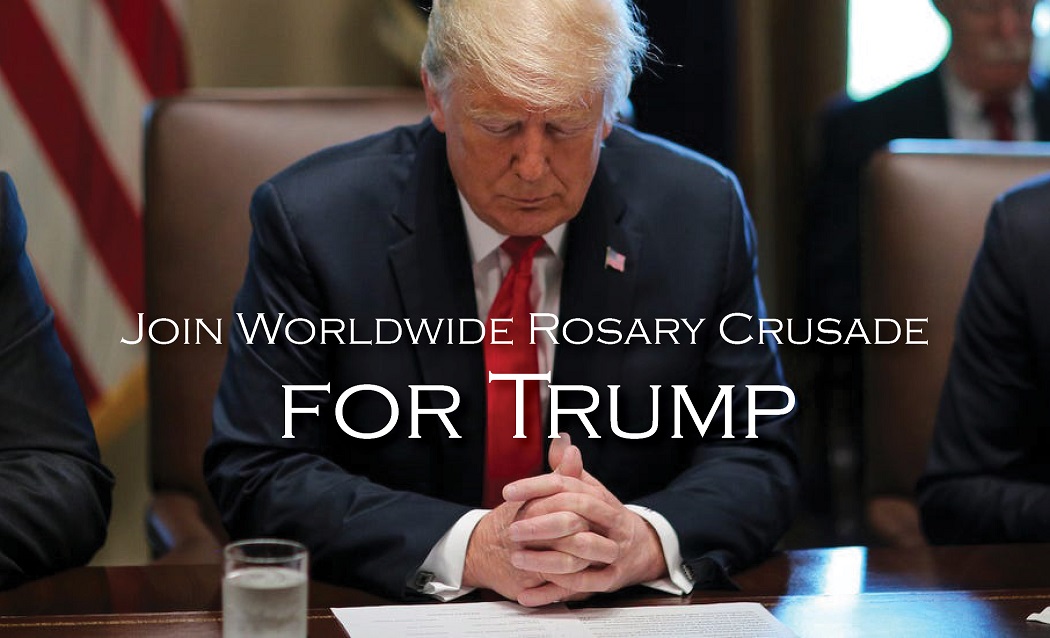 THE HOLY ROSARY, MOST POWERFUL WEAPON AGAINST THE ENEMY OF GOD AND MAN

Anyone who believes he can merit the glory of Paradise by living a mediocre life knows he is on the wrong track: Regnum caelorum vim patitur et violenti rapiunt illud [The kingdom of heaven suffers violence, and the violent take it by force] (Mt 11:12).

In these strong words of the Gospel we understand that only the violent can in some way conquer the Justice of God and obtain its reward thanks to His infinite Mercy. A violence, a force, that is certainly not that of the world but that consists above all in recognizing our own unworthiness – as mortal creatures before the Uncreated and Eternal Being, and as sinners before the Holy of Holies – and also the Omnipotence of God, who deigned to redeem us by the Passion and Death of His Divine Son. I would also say that the first act of this sublime violence to conquer the Kingdom of God was accomplished by Our Lord, who in the eternity of time wanted to restore the Fall of Adam by offering himself to the Father to redeem us from sin and death: Tunc dixi: Ecce venio. In capite libri scriptum est de me, ut faciam Deus voluntatem tuam [Then I said: Behold, I come. In the scroll of the book it is written of me, that I should do your will, O God] (Ps 39:8-10). Similarly, Our Lady also responds to the Archangel Gabriel: Ecce ancilla Domini: fiat mihi secundum verbum tuum [Behold the handmaid of the Lord: be it done to me according to your word] (Lk 1: 38).

This is the violence that shakes the gates of Heaven: the power of humility and sacrifice, following the example of Christ and His Most Holy Mother. She, the Mediatrix of all graces, knew how to obtain from the Mercy of God that which His Justice would have refused. And it is to Her, Our Advocate, that we raise our fervent prayer, certain of being heard: Memorare, o piissima Virgo Maria, non esse auditum a saeculo quemquam ad tua currentem praesidia, tua implorantem auxilia, tua petentem suffragia esse derelictum [Remember, O most gracious Virgin Mary, that never was it known that anyone who fled to thy protection, implored thy help, or sought thy intercession was left unaided.]

In the recitation of the Rosary we invoke the Most Blessed Virgin with three very simple prayers, so easy that even a child can recite them: the Pater noster, the Ave Maria and the Gloria Patri. And while we repeat these prayers we meditate on the Joyful, Sorrowful, and Glorious Mysteries, concentrating our mind on the sweet words that our lips pronounce. All of Catholic doctrine is contained in these three prayers; all of Marian doctrine is proclaimed in the Ave Maria. And at these words, which rise to the glorious throne on which Our Mother sits as Queen, the entire Heavenly Court is moved, the Most Sacred Heart of Jesus is touched with compassion, and the arm of Divine Justice is stopped.

Let us therefore have recourse to the recitation of the Holy Rosary, dear brothers and sisters, in this moment of tribulation and of total crisis. Let us also make violence in heaven, by means of the infallible weapon of prayer that the Most Blessed Virgin taught Saint Dominic and that over the centuries has obtained the conversion of sinners, the salvation of the nations, and the defeat of the Enemy.

Saint Pius V ordered the faithful to recite the Rosary to impetrate victory from God in the epic battle of the Christian Armada against the Turk in the waters of Lepanto: still today, at noon each day, the bells ring in our cities to recall October 7, 1571. The Senate of the Republic of Venice wanted to honor the Queen of Victories by having these words engraved on the Doges’ Palace: Not valor, not arms, not leaders, but Our Lady of the Holy Rosary made us victors. We too, who fight an even more bloody battle without a deployed army against an even more terrible enemy, ought to have recourse to the Rosary, with the same faith that strengthened the arm of the valiant leaders of Lepanto.

Let us pray for the United States of America; let us pray for our President; let us pray for his victory, that the Lord God of Hosts – Dominus Deus Sabaoth – will grant that he may know how to place himself under God’s protection and may desire to make himself the knight who fights for the just and the defender of the oppressed. Let us pray that the snares that the invisible Enemy plots in the shadows may come into the light, and that those who want to promote vice and sin, and rebellion against the Commandments of God and the very laws of nature, may be defeated. Let us pray with the faith of children who run gementes et flentes to their Queen, so that she may intercede for us with her Divine Son and obtain for us the grace to see the beloved American nation protected as well as the whole world, our families defended, and our adversaries defeated. Then we too will be able to write: Not valor, not the power of the media, not economic resources, but Our Lady of the Holy Rosary made us victors. So may it be.

14 August 2020
Vigil of the Assumption of Mary Most Holy

Published in Remnant Articles
Tagged under
[Comment Guidelines - Click to view]
The Remnant values the comments and input of our visitors. It’s no secret, however, that trolls exist, and trolls can do a lot of damage to a brand. Therefore, our comments are heavily monitored 24/7 by Remnant moderators around the country.  They have been instructed to remove demeaning, hostile, needlessly combative, racist, Christophobic comments, and streams not related to the storyline. Multiple comments from one person under a story are also discouraged. Capitalized sentences or comments will be removed (Internet shouting).
The Remnant comments sections are not designed for frequent personal blogging, on-going debates or theological or other disputes between commenters. Please understand that we pay our writers to defend The Remnant’s editorial positions. We thus acknowledge no moral obligation whatsoever to allow anyone and everyone to try to undermine our editorial policy and create a general nuisance on our website.  Therefore, Remnant moderators reserve the right to edit or remove comments, and comments do not necessarily represent the views of The Remnant.
back to top
Last modified on Tuesday, September 8, 2020
Tweet

More in this category: « AMERICA TO BOYCOTT NFL: A Letter from an Old Soldier Lessons on COVID and Logic from Sweden »