New from RTV (Videos to see before Election Day!) 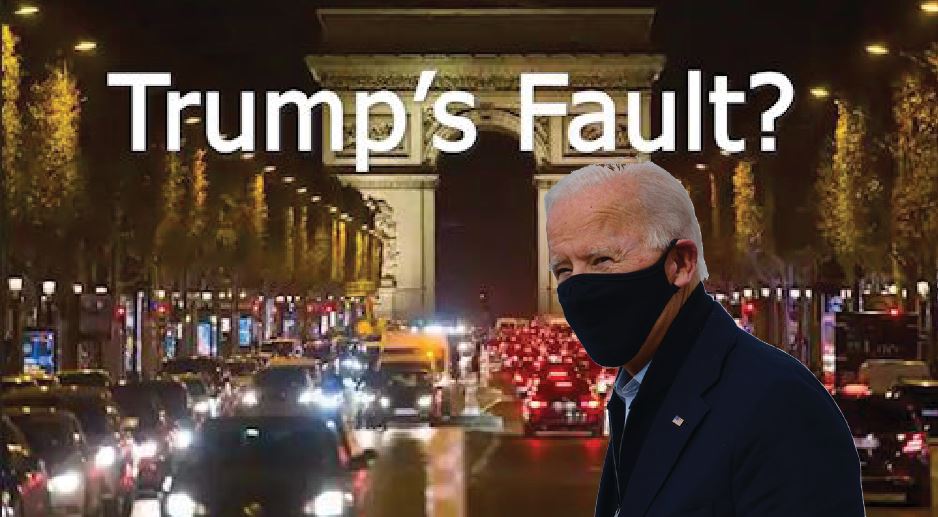 On the eve of the most important election in U.S. history, Joe Biden is campaigning on your fear of COVID, arguing that Donald Trump risked our lives by botching the response to the pandemic.

Well, Europe has been under harsh lockdowns and mandatory mask mandates for months. The French have not been allowed to travel more than a certain distance from their homes. They have mask mandates even outside, with heavy fines for failure to comply.

And now it is starting all over again.

Over the past few days, hundreds of thousands of French have been fleeing Paris ahead of harsh new government lockdown orders.

So, if "following the science" works so well, why is Europe going back into lockdown? Is this Trump's fault, too? What was he supposed to do that Europe didn't do?

Michael Matt reviews what Donald Trump actually did to help save American lives, beat back the virus and reopen the economy, back when 65 percent of Americans actually approved of Trump's Covid response.

So what happened? Why are millions of Americans blaming Trump for not locking us down like they did in Europe, when the European lockdowns don't seem to be working too well?

Do you seriously believe Joe Bided would do a better job at pandemic management? Or are you just drinking the CNN Kool-aid?

We're doing what we can to encourage as many people as possible to go out and vote for Trump i.e., vote for the survival of our nation.

Text, email or telephone three friends right now and remind them to go out and vote for the most pro-life president in recent memory.

Michael Matt goes live, just two days before the 2020 Presidential Election to kick off this last battle in the war to save America!

Plus, Michael visits the place where George Floyd was arrested and died in Minneapolis.

Finally, Steve Bannon gives Michael Matt some last-minute advice on how we can still win this election.

Visit www.RemnantNewspaper.com for daily updates! And don't forget to subscribe to Remnant TV at www.Remnant-TV.com

Addressing MAGASOTA, the largest pro-Trump group in Minnesota, Michael Matt breaks down exactly what is at stake in this year's presidential election.

This is obviously not just another election. The fate of the nation and indeed the world may well hang in the balance.

Regardless of what the future holds, given Trump's past defense of freedom of religion, self-defense and the right to life, Catholics have an obligation to go out and join the fight for the reelection of President Trump.

There is no other option. And if Trump disappoints us down the line, well we'll deal with that then. For now, everyone from Soros to Gates and from Davos to the UN, are at war with Trump.

Why? Because it's all a great big ruse to fool us? Because Trump is secretly one of them? Please! They hate Trump because he's standing for our sovereign nation (over their NWO), for the right to life (over their culture of death), for our right to self-defense (over their lawless chaos) and for God (over their demons).

Time is running out and, given what's happening in Democrat-run American cities right now, this has already become a matter of life and death.

To Help Us Defend the Conservative Voice on the Internet, DONATE HERE: https://remnantnewspaper.com/web/index.php/donate-home

In this last Sunday Sermon before Election Day, Father addresses what he calls the "evil" Covid restrictions put in place in California.

This, he says, provides a snapshot of President Joe Biden's America.

Father reminds us that this is not just an election; this is an attempted global takeover, riding in on the back of a health dictatorship.

The time for talk is over. This is it! Pray like there's no tomorrow...because, you know what? In many ways, if Biden wins, there may not be.

[Comment Guidelines - Click to view]
The Remnant values the comments and input of our visitors. It’s no secret, however, that trolls exist, and trolls can do a lot of damage to a brand. Therefore, our comments are heavily monitored 24/7 by Remnant moderators around the country.  They have been instructed to remove demeaning, hostile, needlessly combative, racist, Christophobic comments, and streams not related to the storyline. Multiple comments from one person under a story are also discouraged. Capitalized sentences or comments will be removed (Internet shouting).
The Remnant comments sections are not designed for frequent personal blogging, on-going debates or theological or other disputes between commenters. Please understand that we pay our writers to defend The Remnant’s editorial positions. We thus acknowledge no moral obligation whatsoever to allow anyone and everyone to try to undermine our editorial policy and create a general nuisance on our website.  Therefore, Remnant moderators reserve the right to edit or remove comments, and comments do not necessarily represent the views of The Remnant.
back to top
Last modified on Monday, November 2, 2020
Tweet

More in this category: « COUNTDOWN to D-DAY 2020: America on the Brink MESSAGE OF ARCHBISHOP CARLO MARIA VIGANÒ TO AMERICAN CATHOLICS AND TO ALL AMERICANS OF GOOD WILL »