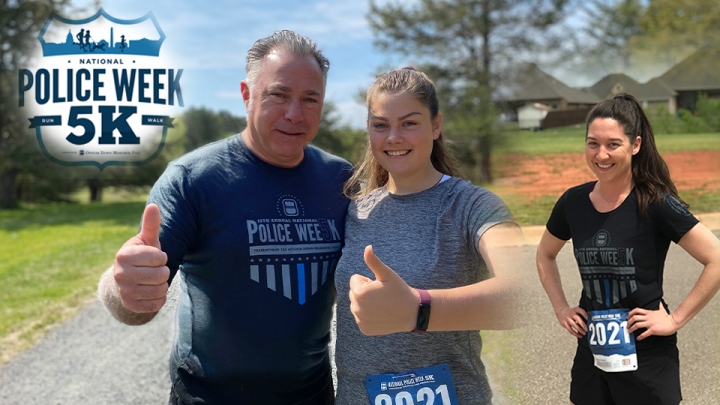 Michael J. Matt, Katie Matt and Tess Mullins--members of the Remnant Team--join 2,500+ in running, walking, and rowing together around the globe

Today is the day!

Back on May 7, the Biden White House issued an order to lower flags to half-staff around the nation to honor fallen police officers during National Police Week 2021.

The flags would have been lowered today, had it not been for the fact that the Biden Administration abruptly reversed the decision last week, eliminating any call to lower the flags in honor of fallen police.

Some states are pushing back. In New Hampshire, for example, Gov. Chris Sununu issued a statement condemning the change:

"The Biden Administration's reversal of their earlier proclamation in the eleventh hour is shocking, and our men and women in blue, along with their families, are owed an explanation for this sudden reversal. I call on New Hampshire's congressional delegation to join with me in rejecting this disrespectful decision."

Why is this happening?  Because Joe Biden’s handlers are communist agitators posing as social justice warriors. And the President does exactly what he’s told to do.

The Biden Administration has sided with the Soros-backed mob against the defenders of law and order in the streets of America.

The reality is this: Once every hometown cop has left the beat in disgust over the bureaucratic hogwash he’s had to endure on a daily basis, the push will be to bring in the “replacements”, i.e., the national and even international troops of the police state.

The cops are not the problem in the streets of America today. The politicians and their globalist puppeteers are.

One of the things we can do to prevent this and, by the way, cancel The Great Reset, is to back the blue by publicly supporting George Orwell’s "rough men" who "stand ready in the night to visit violence on those who would do us harm…so that we can sleep safely in our beds.”

And that’s what we’re doing here in Minnesota and elsewhere in the country today, where members of our Remnant team are running the National Police Week 5K.

Good cops are the last line of defense and the only thing that stands between us and the police state of the New World Order. So go out and back the blue!

Here are a few details about today's race:

Every year, our National Police Week 5K begins with an honor guard tribute, the national anthem, and a moment of silence to remember our fallen law enforcement heroes…the 362 officers that died in the line of duty in 2020 and the 24,000+ that fell before them. Despite being virtual, this year is no exception thanks to pre-recorded footage from the Fairfax County Police Department Honor Guard you can watch below.

We ask that you carve out a small portion of your day today to reflect on the sacrifices of our officers during your own 5K. Thank you for being a part of our virtual team. One united group. One mission. Remember the fallen.

[Comment Guidelines - Click to view]
The Remnant values the comments and input of our visitors. It’s no secret, however, that trolls exist, and trolls can do a lot of damage to a brand. Therefore, our comments are heavily monitored 24/7 by Remnant moderators around the country.  They have been instructed to remove demeaning, hostile, needlessly combative, racist, Christophobic comments, and streams not related to the storyline. Multiple comments from one person under a story are also discouraged. Capitalized sentences or comments will be removed (Internet shouting).
The Remnant comments sections are not designed for frequent personal blogging, on-going debates or theological or other disputes between commenters. Please understand that we pay our writers to defend The Remnant’s editorial positions. We thus acknowledge no moral obligation whatsoever to allow anyone and everyone to try to undermine our editorial policy and create a general nuisance on our website.  Therefore, Remnant moderators reserve the right to edit or remove comments, and comments do not necessarily represent the views of The Remnant.
Last modified on Saturday, May 15, 2021