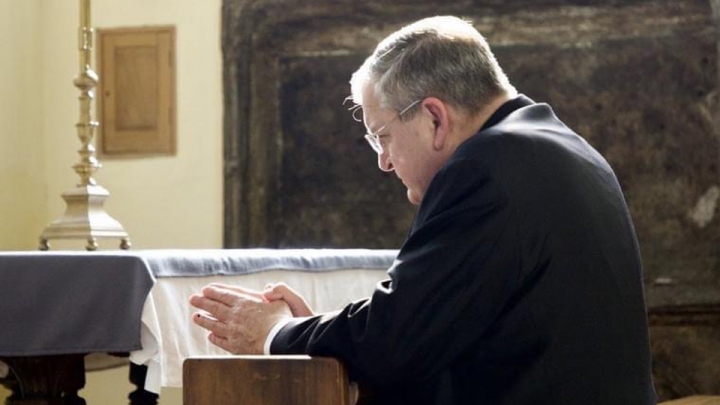 As he suffers on what could be his deathbed, the media -- including the neo-Catholic media -- are ridiculing Cardinal Burke for having expressed deep concerns over vaccines developed through the use of the cell lines of aborted fetuses. Apart from the twisted timing of such attacks against a very sick man, has it not occurred to them that, should the Cardinal die, history will surely count him among those who earned the martyr's crown?

Abortion is the blood sacrifice of a new pagan religion. In standing against any cooperation with it, Cardinal Burke is standing in defense  not only of the unborn but also of Jesus Christ the Author of all life and the teaching of His Church.

On vaccines, Cardinal Burke has said definitively: "It is never morally justified to develop a vaccine through the use of the cell lines of aborted fetuses," adding that the state "is not the ultimate provider of health. God is."

Greater love than this no man hath, that a man lay down his life for his friends.

He knew the risk to his own health but obviously believed that, in good conscience, he could not participate in evil in order to save his own life. This is the very definition of martyrdom. And I for one would much prefer to face God with a good conscience and a shorter life as Cardinal Burke may have to do (God forbid), rather than as Pope Francis or Cardinal Cupich, who are out there right now demanding that we all purchase an extension of our lives with the blood of the unborn.

At this moment, we may be witnessing the martyrdom of Raymond Cardinal Burke. May God make us worthy to stand with this good and holy priest.

[Comment Guidelines - Click to view]
The Remnant values the comments and input of our visitors. It’s no secret, however, that trolls exist, and trolls can do a lot of damage to a brand. Therefore, our comments are heavily monitored 24/7 by Remnant moderators around the country.  They have been instructed to remove demeaning, hostile, needlessly combative, racist, Christophobic comments, and streams not related to the storyline. Multiple comments from one person under a story are also discouraged. Capitalized sentences or comments will be removed (Internet shouting).
The Remnant comments sections are not designed for frequent personal blogging, on-going debates or theological or other disputes between commenters. Please understand that we pay our writers to defend The Remnant’s editorial positions. We thus acknowledge no moral obligation whatsoever to allow anyone and everyone to try to undermine our editorial policy and create a general nuisance on our website.  Therefore, Remnant moderators reserve the right to edit or remove comments, and comments do not necessarily represent the views of The Remnant.
back to top
Last modified on Friday, August 20, 2021
Tweet