By his own admission, he was haunted by the ‘smoke of Satan’, which he said had entered the sanctuary of the Catholic Church. He was widely criticized both by traditionalists and liberals alike for being lukewarm and indecisive, and he was not in possession of sufficient charisma to win over either side.

By 1972, Pope Paul began to realize that things had gone terribly wrong in the Church. “There was the belief that after the Council there would be a day of sunshine for the history of the Church” he noted on June 29, 1972. “Instead, it is the arrival of a day of clouds, of tempest, of darkness, of research, of uncertainty.”

For Paul VI that “day of clouds” also included pesky accusations of moral misconduct which never quite went away and, in fact, stopped his beatification in its tracks when the Vatican tried to trot this pony out back in the early 1980s. Paul VI became the first pope in history, in fact, to issue a statement regarding his own sexuality when in 1968 and in front of 20,000 people in St. Peter’s Square he felt the need to defend himself against the charge of having had a homosexual relationship.

Controversy notwithstanding, it’s Montini’s turn to be Raised to the Tables—the man famous for wrecking the Mass and the last pope to wear the papal tiara, having given his to the United States in a dramatic gesture symbolizing democracy’s triumph over the old “triumphalist” Catholic Church. Pope Paul literally uncrowned himself after some 800 years of Roman pontiffs wearing theirs in kingly service of Christ’s bride.

After Paul, never again. Because he was a humble man and, by implication, all of his 261 predecessors evidently were not, he stepped off the papal throne at the end of the second session of the Second Vatican Council in 1963 and dramatically set his crown on his altar in St. Peter’s, thus renouncing papal kingship in deference to the aggiornamento of the Second Vatican Council.

The Church has obviously never recovered from that ill-advised papal surrender to the spirit of the age—a massive blunder even Humanae Vitae (Pope Paul’s great encyclical in defense of human life) could not overcome. Without the tiara—the symbol of his AUTHORITY—and all that that implied, Paul VI’s words against contraception fell largely on deaf ears throughout the whole of the Catholic world. In the minds of millions of “reformed” Catholics, Peter had become just another politician with an opinion to be ignored at will.

Long forgotten, Pope Paul’s tiara is still on display in the National Shrine in DC where modern, self-loathing Catholics once used it to delude themselves into thinking the Church was much better off in 1970 than back in those “dark ages” of faith when Christ was King, as were His vicars on earth.

After Vatican II, Holy Mother Church had been democratized! All glory, laud and honor to thee, O Great Architect of the Universe!

Paul’s legacy is crowned by the novel spectacle of uncrowned Roman pontiffs sitting in Peter’s chair ever since. His was the last papal coronation—a breach with Tradition dating back at least to the reign of Pope Nicholas I in 858. After Paul, no pope would be crowned again, and Peter’s successors would be elected and inaugurated into office much like a president or prime minister—a rank novelty which Americanized Catholics still praise as “totally awesome, dude”.

Next up? Canonization, of course!

It should be abundantly obvious to everyone who is not a total neo-Catholic that the modern Beatification Awards ceremony has moved well past silliness and gone straight on into the depths of ecclesiastical narcissism. Anyone who believes the Holy Ghost is involved with such obvious fundraising and political opportunism is surely drinking deeply from the Kool-Aid vat.

But perhaps this clear and present abomination—the rank politicization of the beatification process—will prove too much even for our neo-Catholic brothers and sisters. Maybe this will be the straw that will finally break the neo-Catholics’ stubborn resolve to defend the indefensible. Let’s hope so, as this destructive agenda, engineered by modernist elements inside the Vatican, simply must be radically opposed by all sincere Catholics before it sacrifices on the altar of progressivism what little is left of the Church’s credibility.

It is difficult to argue with those who insist that the Vatican is spinning out of control. With a few outstanding exceptions duly noted, it’s undeniable that the Vatican today is crawling with politicians, rank modernists, and even significant representation from the so-called “Lavender Mafia”—powerful forces that have infiltrated our Church and are using the Bride of Christ like a cheap whore to satisfy their own perverse agenda.

One wonders what it will take for Catholic men worldwide to finally realize they’ve been had and to stand up and object to this scourging of Holy Mother Church. As far as this writer is concerned, the gloves are off and the façade is now entirely exposed. Time to take our Church back. 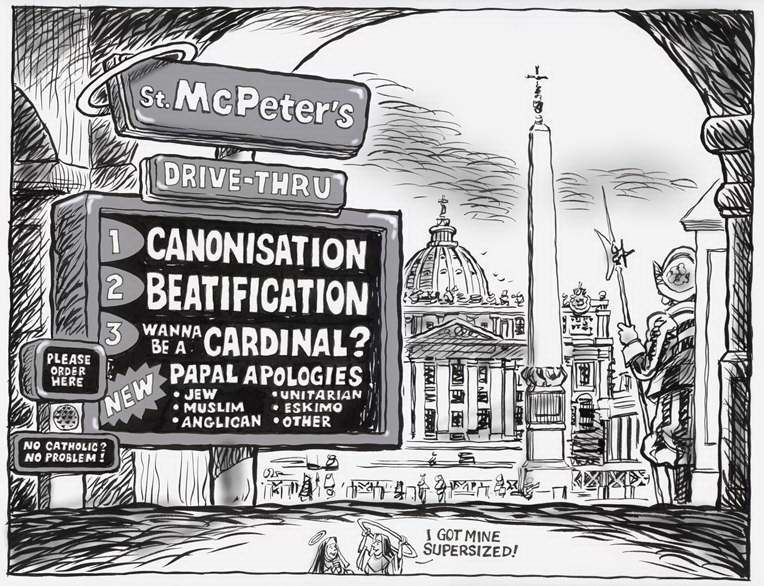 Published in Remnant Articles
back to top
Last modified on Friday, April 25, 2014
Tweet

More in this category: « The Fast-tracked Canonization: A Lamentable Lack of Prudence Dancing on a Corpse…and Liking It »