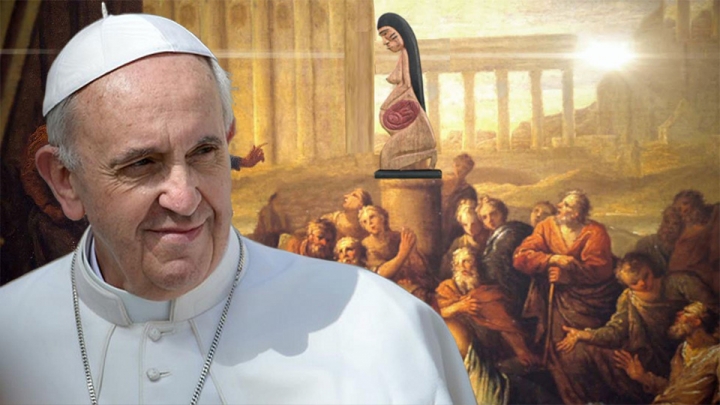 From the first malign tinkering with the Mass in the 1960s until July 16, 2021, the Novus Ordo regime was parasitic on the authentic liturgies of the Church. A fiction veiled the dependency. The “hermeneutic of continuity” (a new dogma, by necessity, even though the Second Vatican Council is always said to have been merely pastoral) excused the rupture by pretending that what was different was the same.

When Pope Francis issued his motu proprio Traditionis Custodes, the fiction was dropped. The hermeneutic of continuity ended on that July day. The Novus Ordo regime—what I have been calling Newchurch—left the company of the Catholic Church the moment Traditionis Custodes went into effect. Newchurch removed itself from the protective canopy of the Mass and installed itself as a separate, false church in opposition to the Bride of Christ.

Until July 16, 2021, I prayed for Newchurch. So did many other Catholics. But now the prayers of the faithful and those of the Novus Ordo regime are at odds. Their prayers are the opposite of ours. We do not pray in unison any longer. Traditionis Custodes ensures that we can’t. The fictive link has been abandoned. Newchurch has nothing to do with the Catholic Church. Newchurch’s prayers are now insults to the Living God.

The Novus Ordo regime is the devil, clothed in vestments, laughing at Christ crucified and at His Mother at the foot of the cross.

Newchurch, for example, prayed for a false “consecration” of Ukraine and Russia, an intentional defiance, under the cover of obedience, of Our Lady’s specific Fatima requests. When the false “consecration” does not result in the conversion of Russia, as it surely will not, Newchurch will have scored another victory against faith. “See, it was all hocus pocus to begin with,” is the tacit message of the Vatican’s recent blasphemous “consecration” charade.

This kind of thing is now standard in Newchurch. The Novus Ordo regime is the devil, clothed in vestments, laughing at Christ crucified and at His Mother at the foot of the cross. Those who are still in the pews at Newchurch “masses” sink deeper into this blasphemy with each passing day.

It is time to end Newchurch. Let us have this thing out once and for all. You say your prayers, Newchurch. Call on your idols and pretenders, your false prophets and apostate priests. With Ahab and Jezebel cry out to Ba’al. Send your prelates to Davos. Kiss your Qurans. Incense Buddhas on your altars. Call down the power of a desert god with the Grand Imam of Al-Azhar.

Invoke Pachamama. Wash yourselves in your sacred vaccines. Pray your rainbow “rosaries” that Gaia may reign.

Call on Martin Luther. (He’s probably in Hell, so you may have to speak up so he can hear you.) Invoke Pachamama. Wash yourselves in your sacred vaccines. Pray your rainbow “rosaries” that Gaia may reign.

Say your prayers, Newchurch. Dance around your altars. Raise your voices to your pantheon. Wear yourselves out in your heresy. Clamor until time is bigger than space. Prophesy!

We in the Catholic Church will say our prayers. We will pray the holy rosary and the Holy Mass. With the angels and saints, we will worship the one true God.

Let us have this thing out. Say your prayers, Newchurch, and we will say ours. For the split which Francis has finalized demands a choice and an answer.

“How long do you halt between two sides? If the Lord be God, follow Him: but if Baal, then follow him.”

[Comment Guidelines - Click to view]
The Remnant values the comments and input of our visitors. It’s no secret, however, that trolls exist, and trolls can do a lot of damage to a brand. Therefore, our comments are heavily monitored 24/7 by Remnant moderators around the country.  They have been instructed to remove demeaning, hostile, needlessly combative, racist, Christophobic comments, and streams not related to the storyline. Multiple comments from one person under a story are also discouraged. Capitalized sentences or comments will be removed (Internet shouting).
The Remnant comments sections are not designed for frequent personal blogging, on-going debates or theological or other disputes between commenters. Please understand that we pay our writers to defend The Remnant’s editorial positions. We thus acknowledge no moral obligation whatsoever to allow anyone and everyone to try to undermine our editorial policy and create a general nuisance on our website.  Therefore, Remnant moderators reserve the right to edit or remove comments, and comments do not necessarily represent the views of The Remnant.
back to top
Last modified on Monday, April 11, 2022
Tweet

More in this category: « THE CURRENT THING: George Soros Loses BIG in Hungary THE DEMOS MEMO: Francis Fatigue in the College of Cardinals (An Interview with Msgr. Nicola Bux) »