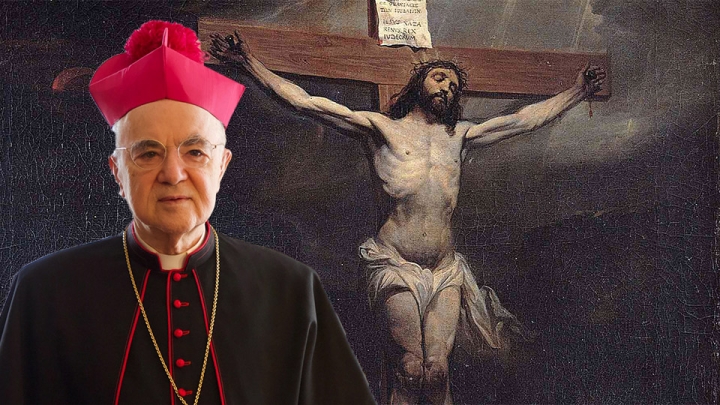 Astiterunt reges terræ, et principes convenerunt in unum, adversus Dominum, et adversus Christum ejus (Ps 2 :2). The kings of the earth and the princes have allied themselves against the Lord and against Christ. The Psalm which begins the First Nocturn of Matins on this day declaims succinctly. Let us break their bonds ; let us cast away their yoke from us ! Is this not what we have been seeing happening right before our eyes for a long, too long, a time ? Do not the powerful and the elite want to cancel every tie with God and rebel against His holy Law ? Do they not seek to disfigure the image of the Creator in the creature and the likeness of the Holy Trinity in man ? And how many times are we ourselves tempted to withdraw from the sweet yoke of Christ, ending by making ourselves slaves of the world, the flesh, and the devil?

All of today’s liturgy resounds with the indignation of the Divine Majesty; of the dismay of the provident Father at the revolt of His children; of the sorrow of the Son over the ingratitude of man; of the bitter disappointment of the Paraclete at the insane obstinacy in evil of those who make themselves blind to the Truth and deaf to the Word of God.

The silence of the Bride of the Lamb, who yesterday stripped herself in her altars, recalling the division of her Lord’s garments, brings us back to the severe liturgy of Calvary, to the solemn sacred action of the Passion, whose divine celebrant intoned the antiphon Deus, Deus meus, quare me dereliquisti? – My God, My God, why have you abandoned me? (Ps 21:1), which was misunderstood by those who witnessed that rite. Eliam vocat iste – He is calling Elijah – said those who were present, unaware of having before them the God Incarnate who was bringing to fulfillment, right before their eyes, exactly what David had prophesied in the twenty-first Psalm. Speravit in Domino, eripiat eum: salvum faciat eum, quoniam vult eum – He hoped in the Lord, let him deliver him: let him save him, since he desires him. And they repeated, as we read in the Passion: Si Filius Dei es, descende de cruce! – If you are the Son of God, come down from the cross! And again: Diviserunt sibi vestimenta mea, et super vestem meam miserunt sortem – They divided my garments among them, and for my clothing they cast lots. At the foot of the Cross, the soldiers rolled dice for the Lord’s seamless garment, without knowing that by this gesture they were taking part in the sacred representation prophesied by Scripture.

If you are the Son of God, come down from the cross! What foolishness. They did not understand that precisely because that man disfigured by the torments of the Praetorium, the scourging, the crowning with thorns, the ascent to Golgotha and the crucifixion was the Son of God, He did not want to descend from the cross. The sacrifice of a man, even the most heroic and atrocious, could never have been able to repair the infinite gravity of original sin and the sins of all times: in order to be able to redeem us from being children of wrath and restore us to the order of Grace, it was necessary that God die on that cross, or rather the Man-God, He who from all Eternity had answered Ecce, venio – Behold, I come – to the voice of the Father; He who in view of whose Incarnation the divine Wisdom had prepared the Immaculate Virgin, the most worthy tabernacle of the Most High – Domus Aurea – the House of Gold, the Ark of the new and eternal Covenant, the Seat of Wisdom. Foderunt manus meas et pedes meos: dinumeraverunt omnia ossa mea – They have pierced my hands and my feet: they have numbered all my bones. And those most sacred hands, those blessed feet that were pierced by nails, even though the Roman custom was that the condemned should only be tied to the cross, should have opened the eyes of a people who heard those words repeated in the synagogues, words that the High Priests knew by heart, words that the doctors of the Law taught to Jewish children. Potaverunt me aceto, the Psalm warned – they gave me vinegar to drink – while a soldier tried to give the dying Lord a drink with a reed.

We should ask ourselves if the ignorance of the Jewish people due to the corruption of the Sanhedrin does not sound like a terrible warning for today’s High Priests, who are equally responsible for the ignorance of the Christian people; and if the threat that the High Priests then saw in the meek Nazarene who performed miracles and preached the Gospel, to the point of plotting to send him to death by the hand of the civil authority, should not make the present High Priests tremble, who even today resort to the kings of the earth and to princes in order to impede His Kingdom, with the sole intention of maintaining their power and social prestige.

Therse are the words of the Responsory of the First Nocturn: O my beloved vineyard, it was I who planted you: how could you have given me bitter fruit, to the point of crucifying me and setting Barabbas free? I fenced you off; I removed the stones from your soil; I built a watchtower for you.

Let us contemplate Our Lady of Sorrows, whose Immaculate Heart was pierced by a sword, and remain standing at the foot of the Cross along with Saint John.

To this vineyard, cultivated with so much care, Divine Wisdom cries her loving and tormented warning: Convertere ad Dominum Deum tuum – Be converted to the Lord your God – and repeats it during the pangs of the Passion, in contemplating the betrayal of Jerusalem, the apostasy of Israel. We tremble, dear children, in thinking of how great is the torment of Our Savior in contemplating the betrayal of those who, redeemed by His Most Precious Blood and purchased at the price of so much suffering, today once again condemn the Lord to death and choose to free Barabbas.

Every day we have heard the Lord teaching in our churches, through the mouth of His Ministers, and today there are those who move against Him with swords and clubs, as if he were a malefactor. Adversus Dominum, et adversus Christum ejus – Against the Lord, and against his Christ.

And if the torment of the Lord betrayed by his folllowers, abandoned by His Apostles, and denied and left alone at the mercy of His enemies is not sufficient to move us to detest our infidelities, let us think of the dreadful sorrow of His Most Holy Mother, who conceived, nursed, and raised the Man-God, saw him become an adult, and accompanied him for thirty years only to see him betrayed by those whom he had benefited most, sent to die by those who only a few days before had acclaimed Him as the Son of David and the King of Israel.

Let us contemplate Our Lady of Sorrows, whose Immaculate Heart was pierced by a sword, and remain standing at the foot of the Cross along with Saint John. In those terrible hours the Divine Maternity of the Most Blessed Virgin had to know in a unique and intimate way the Passion of Her most beloved Son, so as to merit for Her the title of Co-Redemptrix. To Her torment at the sufferings of Our Lord was added Her suffering over our sins, the cause of so much grief for the Savior. Each one of them pierced the Most Sacred Heart of Jesus and the Immaculate Heart of Mary, mystically uniting the Divine Son and the Most Pure Mother in the Passion. This should be enough, dear children, to make us detest our sins and spur us not only to convert but to make every breath, every beat of our heart, and every thought a cause of relief and comfort for Them, in a spirit of reparation and expiation.

This should be enough, dear children, to make us detest our sins and spur us not only to convert but to make every breath, every beat of our heart, and every thought a cause of relief and comfort for Them, in a spirit of reparation and expiation.

In the silence of the Parasceve, when nature itself silently attends the immolation of God – of God! – almost incredulous at the hardness of so many hearts, let us prostrate ourselves before the Cross, repeating with Saint Venantius Fortunatus the solemn words of the hymn with which we will accompany the Blessed Sacrament from the Tomb to the altar:

Let us bend the knee before the wood of salvation consecrated by the New Adam.

Blest Tree, whose happy branches bore
the wealth that did the world restore;
The beam that did that Body weigh
which raised up hell’s expected prey.

Let us make our own the consoling verses of Crux Fidelis:

Bend your branches, ancient tree,
relax your inward pith and rigor,
Make soft that native hardihood,
and stretch gently on your wood
the limbs of the celestial King.

Sing, my tongue, the glory
of the victorious fight,
and the trophy won on the Cross.
Tell of the noble triumph:
the Redeemer of the world conquered
by immolating Himself.
And so may it be.

[Comment Guidelines - Click to view]
The Remnant values the comments and input of our visitors. It’s no secret, however, that trolls exist, and trolls can do a lot of damage to a brand. Therefore, our comments are heavily monitored 24/7 by Remnant moderators around the country.  They have been instructed to remove demeaning, hostile, needlessly combative, racist, Christophobic comments, and streams not related to the storyline. Multiple comments from one person under a story are also discouraged. Capitalized sentences or comments will be removed (Internet shouting).
The Remnant comments sections are not designed for frequent personal blogging, on-going debates or theological or other disputes between commenters. Please understand that we pay our writers to defend The Remnant’s editorial positions. We thus acknowledge no moral obligation whatsoever to allow anyone and everyone to try to undermine our editorial policy and create a general nuisance on our website.  Therefore, Remnant moderators reserve the right to edit or remove comments, and comments do not necessarily represent the views of The Remnant.
back to top
Last modified on Friday, April 15, 2022
Tweet

More in this category: « Our Place in the Ever-Present Agony in the Garden HOLY WEEK: The Love Story that Built Western Civilization »