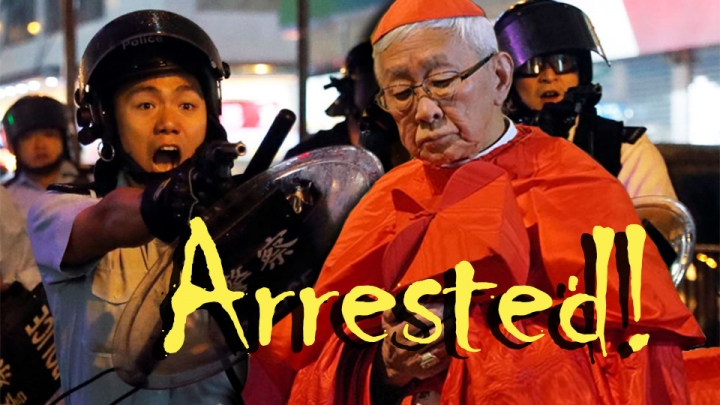 Hong Kong authorities arrested Cardinal Joseph Zen today, and he is being held on suspicion of "colluding with foreign forces to endanger China’s national security." (See video below)

Cardinal Zen is one of the few voices in the Catholic hierarchy to publicly challenge Pope Francis's secret deal with the Chinese Communist Party. As former Bishop of Hong Kong, Zen recently traveled to the Vatican to try to discuss this with Pope Francis, but his efforts proved futile when Francis refused to give him a hearing.

He was well aware of the risks he was taking, and now the 90-year-old Catholic hero has been thrown in jail for speaking out.

This news reminds us not to dismiss as temporary or "no big deal" the lockdown on humanity in which the CCP has been engaging in China in general but especially in Shanghai.

So the question is: As Christians come under ruthless persecution in China,  why is Pope Francis making secret deals with a Chinese Communist Party that is responsible for throwing even Catholic bishops in prison?

What is it going to take for the Catholic world to  finally admit that Team Francis is playing for the other side?

Please pray for the courageous Cardinal Zen, who may soon become a modern-day martyr for the rights of God in a Godless Globalist regime, as well as the champion of religious freedom for Christians all over the world.

Michael Matt asks the question: As Catholics come under massive persecution in China, where is the Vatican and why is Pope Francis making secret deals with a Chinese Communist Party that has been throwing Catholics in prison for years?

Full Remnant Underground episode from which this excerpt was taken: https://remnant-tv.com/video/578/elon-musk-a-lost-boy-in-post-christian-neverland?channelName=RemnantTV

[Comment Guidelines - Click to view]
The Remnant values the comments and input of our visitors. It’s no secret, however, that trolls exist, and trolls can do a lot of damage to a brand. Therefore, our comments are heavily monitored 24/7 by Remnant moderators around the country.  They have been instructed to remove demeaning, hostile, needlessly combative, racist, Christophobic comments, and streams not related to the storyline. Multiple comments from one person under a story are also discouraged. Capitalized sentences or comments will be removed (Internet shouting).
The Remnant comments sections are not designed for frequent personal blogging, on-going debates or theological or other disputes between commenters. Please understand that we pay our writers to defend The Remnant’s editorial positions. We thus acknowledge no moral obligation whatsoever to allow anyone and everyone to try to undermine our editorial policy and create a general nuisance on our website.  Therefore, Remnant moderators reserve the right to edit or remove comments, and comments do not necessarily represent the views of The Remnant.
Last modified on Wednesday, May 11, 2022