The War Is Over (for the moment) 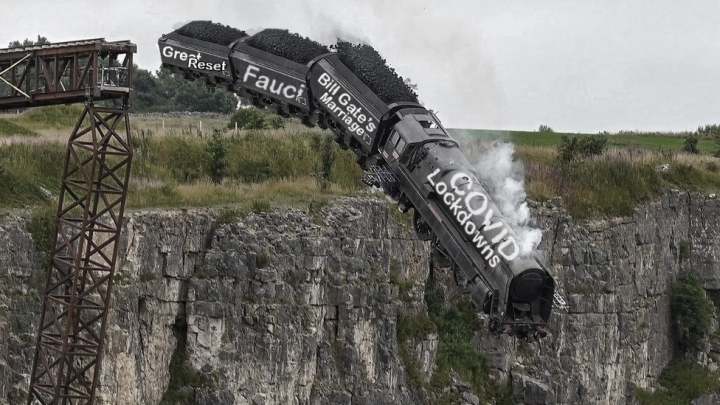 Editor's Note: This article is pulled from the February 28th Remnant Newspaper. We hope you enjoy this look into the content of the world's oldest Traditional Catholic journal, and consider subscribing for more like this. MJM

They tried so hard—with the blessing of Pope Francis—to vaccinate the whole world. They even attempted to set up an international digital passport system that would lock down the unvaccinated for the rest of their lives. They were so excited over their grand COVID opportunity to reset the world in the image and likeness of Godless Globalism.

Happily, their golden opportunity is suddenly fading away. Thanks to Omicron, COVID is dying throughout the whole country and around the world.

Here in Minnesota, the epidemic is over everywhere except in the pages of the Minneapolis Star Tribune, a horrible little rag whose editorial staff is hellbent on keeping viruses and racism alive forever. 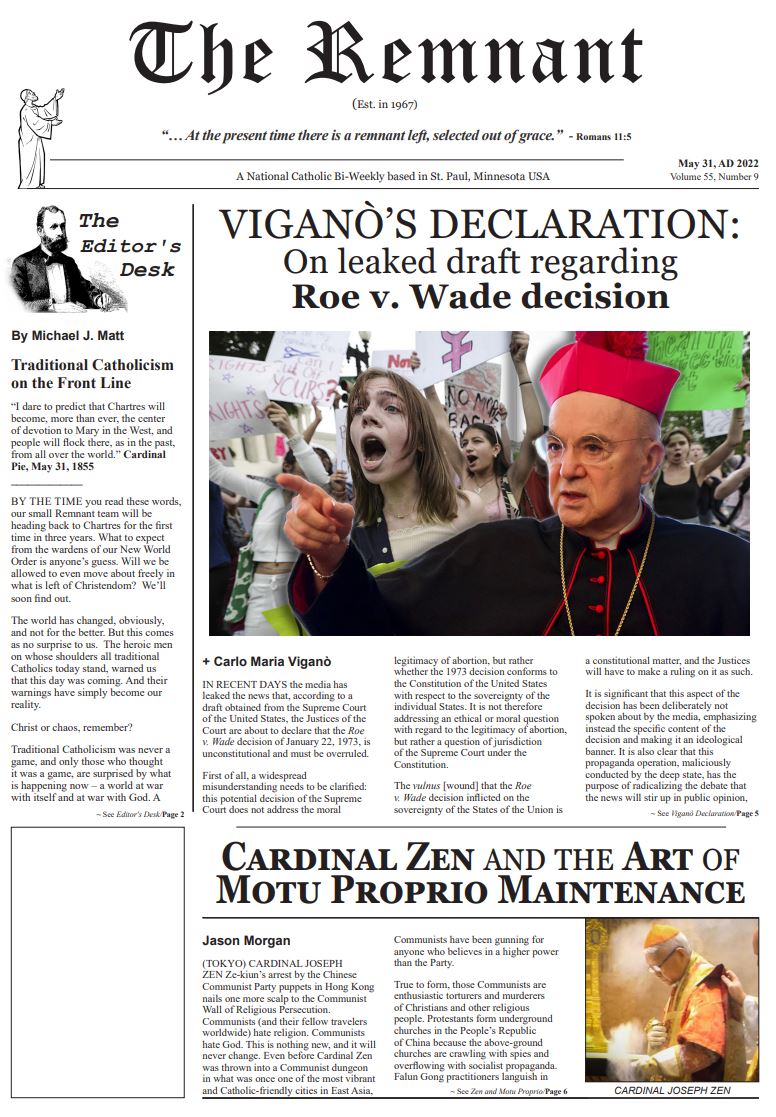 In Europe, it’s the same story. Even Austria has finally seen the light.  The Minister of Health and Social Affairs announced that Austria will lift almost all Covid restrictions by March 5, including proof of vaccination.

The plandemic is collapsing worldwide, and the Lunatics of Davos have just lost a round.

Ironically enough, the U.S. (with all her problems) has been standing squarely in the way of this evil Reset from the start.

What’s next?  Well, that remains to be seen. The Lunatics are not going down without a fight. In this election year, their options are extremely limited here in the States since their insane aspirations are costing Democrats their political future.

And, ironically enough, the U.S. (with all her problems) has been standing squarely in the way of this evil Reset from the start. Donald Trump’s got his problems, but if Hilary Clinton had been crowned in 2016, the U.S. in 2022 would stink just like Justin Trudeau’s People’s Republic of Canada.

Still, there’s work to be done. Moving forward, it seems to me we are called to do what we can to frustrate Plan B… whatever that is.

I realize, we do not occupy positions of power sufficient to derail Agenda 2030, at least not politically, but the spiritual option is still on the table. What if God were to step in between now and 2030, and what if we were to spend the next eight years begging Him to do so?

Traditional Catholicism is key to the defeat of the Lunatics of Davos. Just ask Pope Francis who’s positively “freaking out” over us.

Furthermore, the Covid plandemic inadvertently reminded the world of just how vulnerable our society is without God, and that reminder has left millions more reliant on prayer than ever before.

Regardless of what may or may not be happening here, one thing is certain: It’s time to beg Christ the King to return.

In addition, the past two years have not been easy on anyone, including the instigators of this latest iteration of the Reign of Terror.  One may argue that everything—even the wheels coming off COVID just now—is right on course. But I wonder if that could possibly include unforeseen developments such as the messy divorce that is tearing the Bill and Melinda Gates Foundation in half right now.

Was that part of the Plandemic? I don’t think so. Last month, Melinda French Gates announced that she is shifting her billions away from the Gates Foundation. This is extremely significant.  God, it would seem, is confounding our enemies, confusing their tongues, and disrupting the erection of the babbling tower known as the New World Order.

Regardless of what may or may not be happening here, one thing is certain: It’s time to beg Christ the King to return. And this is something we can actually do, and we must do now that the desperation of the enemies of the Cross indicates they are not nearly as convinced of their own invincibility as we are.

Resistance is simply not futile.  In Canada right now, the world is watching an act of sheer desperation on the part of a weak prime minister who is clearly in over his head.

South of the Canadian border, Joe Biden is senile.

Across the Atlantic, Pope Francis is emerging as an angry old man, whose fits of rage show how close he is to defeat, as Catholics the world over become aware of what a fraud he is.

So, he’s locking us down, while the Prime Minister is freezing the bank accounts of Canada’s freedom fighters, and the senile American President is instructing his Department of Homeland Security to quietly release a “National Terrorism Advisory System Bulletin” which states that “false online conspiracy theories… undermine public trust in government institutions and thus encourage unrest and could potentially inspire acts of violence.”

That’s right, because Team Biden failed to fool the nation, they’re left to desperately attempt to outlaw political discourse.  If you don’t agree with the mad President, you’re a “domestic terrorist.”  Yet another act of desperation that will surely fail.

Meanwhile, Francis is similarly exercised over traditional Catholic resistance.  He’s even resorting to working with CatholicFactCheck.com to try to silence “Catholic fake news” – an effort recently revealed to be backed by Bill Gates, George Soros and Google.

Rumors abound that on March 2, Team Bergoglio will go full Stalin on Traditional Catholics, especially the Ecclesia Dei communities. It's reported that the pope will issue a document attempting to accomplish three objectives: 1) The suppression of the parish Latin Mass, 2) the requirement that Ecclesia Dei communities become bi-ritual, and 3) no more ordinations in the Old Rite.

Good luck with that, Holiness. We’re already working on the catacomb chapels that will see us through until you finally go to your eternal reward.

By the way, curiously Francis met with the Superior General of the Society of St. Pius X in February 2022.  God knows why but we can guess: This scheming, little man is attempting to corral Tradition inside one Fraternity that will be under the control of his globalist Vatican.

If Covid lockdowns have taught us anything, it’s that outright EVIL is in charge and Francis is complicit with it.

Brace yourselves – Bergoglio is on the warpath against faithful Catholics.  Why? Because he failed to seduce us. He failed to vaccinate us. He failed to fool us. And now we stand in the way of his globalist friends who want to build a New World Order.

We’re honored to occupy this ground and we’re not going anywhere. Here we will hold up God, not the UN, as the ultimate solution to the problems besetting the modern world.  Francis may hold up the United Nations and Globalism all he wants. Nobody’s buying it anymore. He’s like Paul’s ‘angel of light’ telling us things other than what God has told us. So, let him be anathema.

If Covid lockdowns have taught us anything, it’s that outright EVIL is in charge and Francis is complicit with it. It is up to the Children of Light, then, to see to it that God is not left out of this counterrevolution. Only God can save our burning cities. Only God can rescue our babies in the womb. Only God can prevent another global lockdown. And only God can rid His Church of the scourge that is Francis.

For 2000 years, Western Civilization was based on the reality that God exists, that His judgment of princes and paupers is the great equalizer, that His law is the basis of our law, that His Commandments are the foundation of all law and order and thus the common good of the whole world.

Without God’s law life is hell on earth, which is what we’re seeing play out every day now, with millions of babies slaughtered in the womb, suicidal kids jacked up on drugs, families broken, priests gone gay, politicians gone insane, and popes out to lunch.

Get used to Lockdowns, forced vaccinations, apostasy, and the chaos of the Children of Darkness – or stand up and fight as Children of Light.

So, the choice is ours: Get used to Lockdowns, forced vaccinations, apostasy, and the chaos of the Children of Darkness – or stand up and fight as Children of Light.

Fight back, not merely for freedom’s sake, but for God’s. Resist the Great Reset because it violates God’s law.  Denounce the New World Order because it is Godless and Christophobic.

And tell the world as much: We the Children of Light stand with Christ the King.  We are His crusaders. We bear His cross and we fight in His Holy Name under the mantle of His Holy Mother.

Do that and we will never be locked down again. Fail to do that, and the Children of Darkness will conjure up something worse and the nightmare will continue.

I know what we’re going to do here at The Remnant, and I trust you’re with me. Unite the clans, resist the pope, and stand with Christ the King against the demons of the New World Order.

[Comment Guidelines - Click to view]
The Remnant values the comments and input of our visitors. It’s no secret, however, that trolls exist, and trolls can do a lot of damage to a brand. Therefore, our comments are heavily monitored 24/7 by Remnant moderators around the country.  They have been instructed to remove demeaning, hostile, needlessly combative, racist, Christophobic comments, and streams not related to the storyline. Multiple comments from one person under a story are also discouraged. Capitalized sentences or comments will be removed (Internet shouting).
The Remnant comments sections are not designed for frequent personal blogging, on-going debates or theological or other disputes between commenters. Please understand that we pay our writers to defend The Remnant’s editorial positions. We thus acknowledge no moral obligation whatsoever to allow anyone and everyone to try to undermine our editorial policy and create a general nuisance on our website.  Therefore, Remnant moderators reserve the right to edit or remove comments, and comments do not necessarily represent the views of The Remnant.
Last modified on Thursday, May 19, 2022