The Poisoned Fruits of a Poisonous Deal* 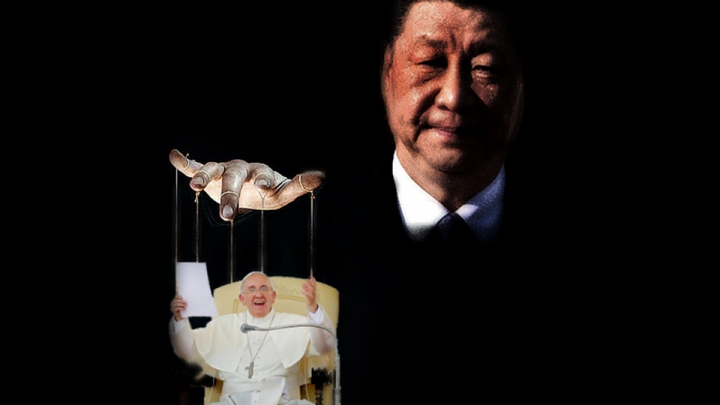 “Silence is a true friend who never betrays.”  ~Confucius

There is no better friend to Communist China than the Bergoglio Vatican.

During the nine years of this interminable regime, the Holy See marched in quiet lockstep with Chinese President Xi Jinping and his brutal CCP enforcers while Xi launched a strategic campaign of terror against Chinese Catholics and Christians. The destruction and persecution of Catholics  continues unabated in mainland China, and now, the once free Hong Kong is now firmly in the CCP’s crosshairs.

More threatening than religious structures to the Communists are the actual leaders and voices of religious freedom.

Predictably, symbols of religious freedom and truth are the first casualties of Communism. Accordingly, Xi’s henchmen rampaged and destroyed thousands of Christian houses of worship, churches, schools and orphanages. President Xi, like Mao Tse-tung is the self-appointed heavenly messenger whose photo replaces crucifixes and holy statutes in churches throughout China.

Yet, more threatening than religious structures to the Communists are the actual leaders and voices of religious freedom.

With a weak US President Biden and an ailing Bergoglio, Xi took advantage of the opportunity to make his move on Cardinal Zen, the leader of the religious freedom movement.

No voice of freedom is more beloved or respected than the 90 year old emeritus Hong Kong Cardinal Joseph Zen and no one more feared by the CCP. On May 11, 2022, Beijing focused its furious crackdown on the frail, but mighty Prince of the Catholic Church and arrested Zen on trumped up charges of “colluding with foreign forces.”

Zen and the Hong Kong Catholics are on their own without the protection of the Vatican as they endure the growing persecution at the hands of the CCP.

Zen and the Hong Kong Catholics are on their own without the protection of the Vatican as they endure the growing persecution at the hands of the CCP.  Bergoglio is either ignorant or uninterested in the stark historical lessons from Mao’s brutal crackdown on the Chinese Catholic Church and its hierarchy in the 1950s, which left thousands of clerical arrests, detentions, deportations, disappearances and deaths. Bergoglio’s callous disregard of the ongoing destruction and persecution of the Hong Kong Catholic Church demands global condemnation.

In 1957, Mao created the Chinese Patriotic Catholic Association (now embraced by Bergoglio) to replace and control the faithful Roman Catholic Church. As a result, the Catholic Church in China underwent a violent and widespread religious persecution at the hands of the Maoists.

In response to the persecution, Pope Pius XII in his 1958 encyclical, On Communism and the Church in China, powerfully warned the Catholic Church about the CCP- created sham Chinese Patriotic Catholic Church. This is the same patriotic Church which Cardinal Zen and countless faithful Catholics refuse to join, despite Bergoglio’s urging in his secret deal with the Communists.

In 1958, Pope Pius XII threw down the papal gauntlet on the faux Chinese Patriotic Catholic Church, leaving no doubt as to its evil intent:

“For under an appearance of patriotism, which in reality is just a fraud, this association aims primarily at making Catholics gradually embrace the tenets of atheistic materialism, by which God Himself is denied and religious principles are rejected.”

“In these meetings, the unwilling are forced to take part by incitement, threats, and deceit. If any bold spirit strives to defend truth, his voice is easily smothered and overcome and he is branded with a mark of infamy as an enemy of his native land and of the new society.

“In addition to these, there are the methods by which minds are upset - by every device, in private and in public, by traps, deceits, grave fear, by so-called forced confessions, by custody in a place where citizens are forcibly "reeducated," and those "Peoples' Courts" to which even venerable bishops are ignominiously dragged for trial.”

Pius XII denounced the physical and psychological torture which thousands of Catholic clerics and laity underwent by the brutal communist security forces. Fears grow that this same ignominious fate awaits the elderly Cardinal Zen. Tragically, Zen will not be protected by Bergoglio.

The inevitable persecution of Cardinal Zen at the hands of Bergoglio’s CCP collaborators will reverberate around the world.

Throughout his 90 years, Joseph Zen, this devoted son of the Catholic Church of China, experienced and endured the brutal hammer and wrath of the communists against the China Catholic Church. Yet, Bergoglio, the Vicar of Dialogue, refused to meet and listen to Cardinal Zen. Zen begged Bergoglio not to trust the lying and deceptive CCP.

The poisonous fruits of the 2018 secret agreement and its subsequent renewal, are painfully evident. Zen correctly saw the deal  as “a betrayal” and “a suicide pact.” Bergoglio cruelly dismissed and ignored Zen’s pleas and blithely executed his clandestine deal with the devil, the Chinese Communists.

The Chinese Communists abundantly reward their collaborators for complicit silence with the allegation that the CCP pays the Vatican $2 billion a year since 2014. Not surprisingly, the Vatican has remained mute and uncritical in the face of 9 years of a brutal CCP crackdown against Chinese Catholics. no exception.

“The poisoned fruits of the Sino-Vatican Agreement are now apparent. The Bergoglian church prefers to remain silent about the persecution of Catholics who belong to the clandestine Church after having handed them over to retaliations at the hands of the patriotic sect and the Chinese Communist Party.”

“In exchange, Beijing rewards the Holy See for its services with substantial annual funding: the mercenaries allow themselves to be bought with thirty pieces of silver that are dripping with the blood of the martyrs of the Church of silence.”

Oh the irony, that the verbose and dialogue obsessed Bergoglio morphs into Bergoglio’s Church of Silence as it muzzles any response in the face of CCP persecution.

~Silence over the CCP violent suppression of the  2019 Hong Kong Freedom Protests.

~Silence over the illegal arrest, detention and disappearance of Chinese Bishops

~Silence over the CCP destruction of Christian and Catholic churches, clergy detention which followed the signing of the secret CCP-Vatican deal.

~Silence over the terms of the secret CCP-Vatican deal on the appointment of bishops.

~Silence over the ongoing human rights abuses by the CCP.

~Silence over the arrest, harassment, and detention of Catholic priests who refuse to join the CCP created Patriotic Church.

~Silence over the unrelenting persecution of Catholics in China by the CCP since the signing of the secret Vatican deal.

~Silence over the CCP Wuhan generated virus.(rather shockingly the Vatican praised China’s handling of the virus).

The Chinese Catholic Church has endured centuries of persecution, most notably in the 20th and 21st century.  Yet, the inevitable persecution of Cardinal Zen at the hands of Bergoglio’s CCP collaborators will reverberate around the world.

Joseph Zen will take consolation in the words of another persecuted Chinese Cardinal Ignatius Kung of Shanghai, who was imprisoned, tortured, and presumed dead for 33 years. After his release from prison, Kung wrote these prophetic and consoling words in 1991:

“The Church in China has suffered severe persecution. We have been able to stand in the front line of the Church. This is our glory. We should be glad and rejoice. As the Shanghai Catholic youth said, “we are greatly honored to have been born and lived at the important time, able to bear witness to Christ.”

“We should not be frightened when persecution comes, because it is not by our own strength that we conquer the world but by the strength of the glorified Christ who has risen from the dead. He said, “Do not fear, for I have conquered the world.”

The fruits of persecution will endure and nourish the Church in China far longer than the poisonous deal between the evil CCP and its Vatican collaborator.

*Description by Archbishop Carlo Maria Viganò of the arrest of Cardinal Zen.

Latest on RTV — ZOE’S STORY: Hope of the World, Terror of the New World Order

[Comment Guidelines - Click to view]
The Remnant values the comments and input of our visitors. It’s no secret, however, that trolls exist, and trolls can do a lot of damage to a brand. Therefore, our comments are heavily monitored 24/7 by Remnant moderators around the country.  They have been instructed to remove demeaning, hostile, needlessly combative, racist, Christophobic comments, and streams not related to the storyline. Multiple comments from one person under a story are also discouraged. Capitalized sentences or comments will be removed (Internet shouting).
The Remnant comments sections are not designed for frequent personal blogging, on-going debates or theological or other disputes between commenters. Please understand that we pay our writers to defend The Remnant’s editorial positions. We thus acknowledge no moral obligation whatsoever to allow anyone and everyone to try to undermine our editorial policy and create a general nuisance on our website.  Therefore, Remnant moderators reserve the right to edit or remove comments, and comments do not necessarily represent the views of The Remnant.
back to top
Last modified on Tuesday, May 24, 2022
Tweet

More in this category: « ZOE’S STORY: Hope of the World, Terror of the New World Order BABIES LIVES MATTER: Bishop Cordileone Says 'No' to Nancy Pelosi »