How Much Longer Until the Catholic Shepherds Oppose the Wolves? 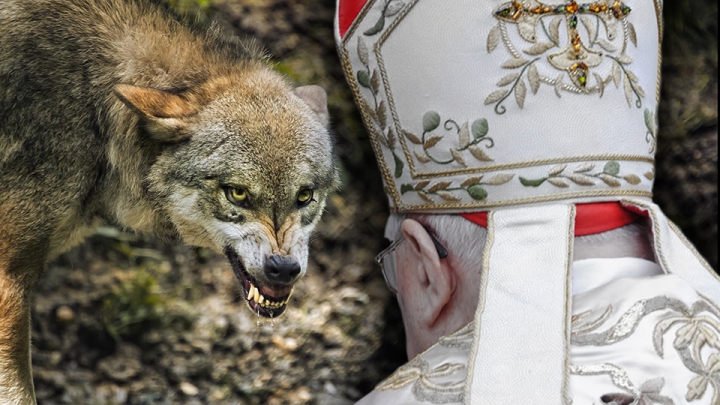 As with all such incidents, the May 24, 2022 school shooting in Uvalde, Texas reflects the tragic breakdown of morality throughout society. In an especially sickening way, though, the Uvalde shooting also highlights the grave failures of those in positions of responsibility to fight for those under their care. In releasing recently obtained footage of the law enforcement officers standing by idly during the shooting, The Austin American-Statesman provided the following details:

“At 12:21 p.m., 45 minutes after police first arrived on the scene, four shots are heard and at least a dozen officers move toward the classroom. An officer can be heard saying, ‘They're making entry.’ Yet they do not. At 12:30, an officer wearing a helmet and ballistic vest pauses to squirt hand sanitizer from a wall-mounted dispenser and rubs his hands together. . . . At 12:41, a man wearing blue rubber gloves and a black shirt, khaki pants and a black baseball cap, with a stethoscope around his neck, arrives and speaks to officers. Other paramedics arrive with supplies. Two officers in camouflage fist-bump each other. At 12:50, a cadre of officers crouches outside the classroom. A burst of gunfire is heard, and the video ends.”

Perhaps those officers were just following orders. Perhaps they have acted, or will act, heroically at other points in their lives. Some of them may eventually become great saints. But for the span of the 77-minute video they let children fend for themselves against a demented gunman.

Since the mid-1960s Catholics have experienced an even costlier tragedy — which has itself contributed greatly to the breakdown of morality that causes mass shootings — as the putative shepherds of the Church have watched the wolves ravage the Mystical Body of Christ.

Since the mid-1960s Catholics have experienced an even costlier tragedy — which has itself contributed greatly to the breakdown of morality that causes mass shootings — as the putative shepherds of the Church have watched the wolves ravage the Mystical Body of Christ. Many of these shepherds are themselves wolves who participate in the destruction. Others, of course, have simply been following orders, as the Uvalde officers did.

It sometimes takes a catastrophe like the Uvalde shooting to cause leaders to reevaluate their responsibilities. For the Church, the ongoing Francis catastrophe has caused some shepherds to rethink their duties to the flock. Unfortunately, it seems that not enough have done so, and even fewer have drawn the appropriate conclusions.

Given that God is permitting the great crisis in the Church and world for a reason, we can no longer sit idly by, denying reality, as the carnage runs its course. We need only consider three realities to understand what we must do: the destruction in the Church caused in the name of the Council; the corresponding destruction caused throughout the secular world; and the comparatively good fruits of those who have adhered to traditional Catholicism in the face of persecution from the false shepherds.

If a tornado destroyed an entire town except for a statue of the Blessed Virgin Mary, we would take notice. Something even more miraculous has occurred in countless families and churches that cooperate with God’s graces to follow the traditional Catholic Faith.

Post-Conciliar Destruction. Despite the demonstrably ludicrous claims of sophists and “fact-checkers,” the reforms carried out in the name of Vatican II have caused the immense destruction we see today. Those who argue otherwise are either lying or immune to reason — in either case we can pray for them but should otherwise ignore them.

Corresponding Destruction in the World. Today more than ever it is clear that the crisis in the Church has facilitated the attacks on the world’s population through the Great Reset and related projects. The globalist tyrants have partnered with Francis and other infiltrators to commandeer the Church to support their demonic goals. A strong Church would render their efforts futile; a captured Church means they have little real opposition to their plans, even if they take time to implement.

Traditional Catholicism Remains Healthy. Despite all of this, we see that those Catholics who strive to adhere to the Church’s traditional beliefs and practices have thrived despite persecution from the false shepherds. Their churches and families may not be perfect, but their contrast with all else around them is unmistakable. If a tornado destroyed an entire town except for a statue of the Blessed Virgin Mary, we would take notice. Something even more miraculous has occurred in countless families and churches that cooperate with God’s graces to follow the traditional Catholic Faith.

Those who have smugly attacked traditional Catholics over the decades are like those Uvalde officers who accosted the parents outside the school who pleaded with the officers to take action.

Just as the Uvalde officers should have assessed the situation and promptly entered the classroom to stop the shooting, the Church’s shepherds should see by these three realities that they absolutely must cooperate with God’s graces to resist Francis’s attacks on the truth Faith. God can solve the current crisis in an instant if He so chooses, but throughout salvation history He has deigned to make use of weak humans. We do not have the luxury to stand back and see how this all plays out — souls are being lost, societies are succumbing to globalist tyranny, and Satan has no plans to relent.

Those who have smugly attacked traditional Catholics over the decades are like those Uvalde officers who accosted the parents outside the school who pleaded with the officers to take action. God bless the many faithful Catholics who have the same courage and determination as Angeli Rose Gomez, the Uvalde mother who took matters into her own hands by rescuing her children from the school:

“Gomez was handcuffed by either a Texas Department of Public Safety Officer or US Marshal as she tried to get past the police line. A Uvalde Police Department officer who knew Gomez then intervened and helped her get free. . . . . Gomez first located the classroom that her oldest son was in and told them to evacuate, then found her youngest son and helped him get out of the school as well.”

No matter how much criticism she has faced since that day, she has her children. Many traditional Catholics can say the same thing: they, and often their loved ones, have the Faith because they refused to take “obey” as the answer to their cries for help.

We need more shepherds who will stand up and fight for the Mystical Body of Christ, without considering the temporal cost.

Catholics who do all they can to cooperate with God’s grace will honor God, save their souls, and invariably face persecution from the wicked fools who have infiltrated the Church. Archbishop Carlo Maria Viganò said it well in his recent letter to a priest suspended by Francis and his collaborators for fighting for the Church:

“Rejoice then, dear and reverend Father, because if the enemies of God did not find in you any reason to persecute you, it would mean that you are not bearing witness to your faithfulness to the Lord. If the world hates you, know that it hated me before you (Jn 15:18), Incarnate Wisdom has said. The present trials are thus a cause for spiritual consolation, an occasion of sanctification, and an opportunity for the edification of the simple. The Lord will repay you one hundred times over for what you are enduring.”

Indeed, those with positions of leadership in the Church should seriously question whether they are doing God’s will if they do not face some degree of persecution from Rome today.

We need more shepherds who will stand up and fight for the Mystical Body of Christ, without considering the temporal cost. Pope Pius XII’s 1950 Apostolic Exhortation to The Clergy, Menti Nostrae, clearly refutes the idea that our shepherds can merely administer the sacraments and hope the wolves go away:

“Furthermore, let your apostolic zeal shine with benign charity. If it be necessary — and it is everyone’s duty — to fight error and repel vice, the soul of the priest must be ever open to compassion. Error must be fought with all our might, but the brother who errs must be loved intensely and brought to salvation. How much good have the saints not done, how many admirable deeds have they not performed by their kindness even in circumstances and in environments penetrated by lies and degraded by vice? Of a truth, he who to please men would gloss over their evil inclinations or be indulgent about their incorrect ways of thinking or acting, thereby prejudicing Christian teaching and integrity of morals, would be betraying his ministry.”

Pius XII wrote that it was “everyone’s duty . . . to fight error and repel vice.” All of us can fulfill that duty by adhering to the truth in our own lives, and praying and sacrificing for the shepherds who have more visible responsibilities in the Church. If God calls us to do more, we can trust that He will give us the grace to do so, even if it appears that we fight a losing battle. God wins in the end. May the Blessed Virgin Mary help us to always persevere in doing all we can do fight for the Mystical Body of Christ. Immaculate Heart of Mary, pray for us!

New at RTV — TOO LITTLE TOO LATE: Francis Responds to Dobbs Decision

[Comment Guidelines - Click to view]
The Remnant values the comments and input of our visitors. It’s no secret, however, that trolls exist, and trolls can do a lot of damage to a brand. Therefore, our comments are heavily monitored 24/7 by Remnant moderators around the country.  They have been instructed to remove demeaning, hostile, needlessly combative, racist, Christophobic comments, and streams not related to the storyline. Multiple comments from one person under a story are also discouraged. Capitalized sentences or comments will be removed (Internet shouting).
The Remnant comments sections are not designed for frequent personal blogging, on-going debates or theological or other disputes between commenters. Please understand that we pay our writers to defend The Remnant’s editorial positions. We thus acknowledge no moral obligation whatsoever to allow anyone and everyone to try to undermine our editorial policy and create a general nuisance on our website.  Therefore, Remnant moderators reserve the right to edit or remove comments, and comments do not necessarily represent the views of The Remnant.
back to top
Last modified on Wednesday, July 13, 2022
Tweet

More in this category: « TOO LITTLE TOO LATE: Francis Responds to Dobbs Decision Sooner Or Later, Every Revolution Gets Around To The Schools       »