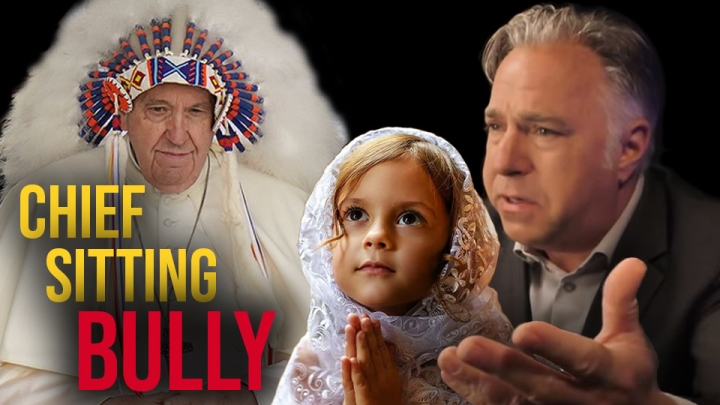 In this Remnant Underground, Michael takes Francis to the mat for the "Great Apostacy" that was his be-feathered photo op blitz in Canada, apologizing to the indigenous for the fact that the Catholic missionaries who evangelized and civilized that nation were simply obeying the Divine Commission from Jesus Christ Himself.

But "Wild Pope Francis's" repentance pilgrimage was something of a flop; the fallout from indigenous Canadians and Catholics alike has not been favorable to Justin Trudeau and the Vatican‘s plan. It was such a flop, in fact, that Pope Francis is now making comments about stepping down.

And to make matters worse, while Francis participates in a pagan smudging ceremony in Canada, and talks about the need to preserve the traditions and language of the indigenous people, he is committing liturgicide against his own church -- Several diocese in the U.S. have now canceled the Latin Mass in accordance with Traditionis Custodes.

Michael Matt has a stirring and inspirational message to the Traditional Catholics who have been impacted by these recent Latin Mass cancelations. And the ultimate irony? According to Michael, the traditional Catholic counterrevolution is stronger, more unified, and more poised for a major victory right now than it was when he was a boy in the early 1970s. To quote him: We have not yet begun to fight.

More in this category: « Bishop Burbidge Cancels Latin Masses in Diocese of Arlington, VA Viganò on the Pope’s Visit to Canada »