Counter-Revolution for Life in a Dying Country 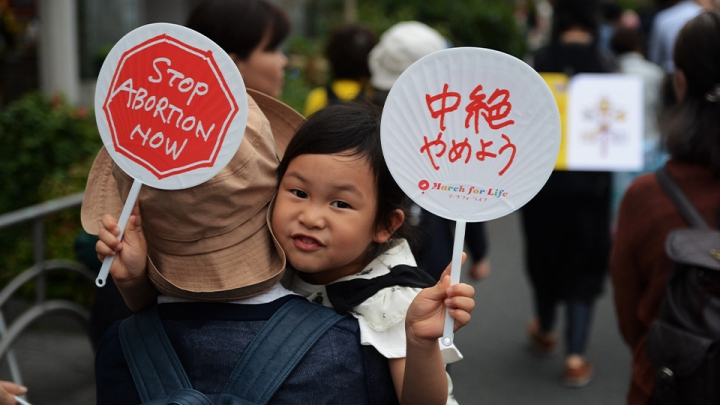 In the mid-summer heat we marched, as we do every year, to protect unborn life. The ninth annual March for Life in Tokyo was another success.

We marched on July 18, 2022, a holiday in Japan: the third Monday of July here is Marine Day, but in Japanese this is pronounced the same as “day of birth.” Marine Day also always falls close to July 13, the fateful day in 1947 when abortion was decriminalized opening the door to mass murders until today. Our Lady of Fatima, pray for us!

If we add up the official figures, based on the declarations of the clinics here (which make a lot of money in this sordid line of work), at least 40 million Japanese have been killed since World War II. That is more than 12 times the Japanese deaths during the war. One in seven children is killed today before he or she ever sees the light of day in Japan.

And this is all taking place in a country that is aging and chronically short of births. Sadly, the year 2021 saw a new record in Japan. It was the year with the absolute fewest number of births on record, with a fertility rate of 1.3 for Japan, and 1.08 for Tokyo. In total, Japan lost 600 thousand people last year, since there are 1.4 million deaths against just 800 thousand births.

The culture of death is triumphant here, and the situation is all the more critical because this culture of death in Japan is hidden and is not vindictive. No one is in the streets as in the West, shouting in favor of abortion. But then again there is no need to do this, because there is no Catholic tradition here as in the West, no one standing up to protect the weak. Nobody is shouting in favor of abortion, because no one is raising their voice to say that one must not kill, that one must cherish human life.

Our world is at war with life, with the innocent soul, with nature, all over the planet. In Japan, everywhere.

So we in Tokyo walked behind the cross in July, accompanied by Our Lady of Fatima. We sang the rosary. To save lives, for Japan, for its conversion. Because without conversion, this generalized massacre will not stop, these human sacrifices will continue. The situation in Japan is as critical as in France. Here, under the apparent calm, the storm is unleashed.

It is a way to pray publicly and in the street to make reparation for the flood tide of sin.

And let’s not be proud of what we in the West have done. We can imagine that the fertility rate of the “native French” is not much higher than that of our Japanese, Italian or Spanish friends. The USA, at least, benefits from a massive Catholic immigration, what a blessing!

The Marian procession in Tokyo was about 70-80 people strong during the March for Life. Others joined the March, too, apart from the Marian procession. In total, there were about 120 of us, wending our way down a route a little less than a couple of miles long in the center of Tokyo. We walked along the main avenue of Ginza, in a pious, prayerful, dignified and solemn atmosphere.

For the first time this year I thought that this march was really useful, not only to bear witness, not only to obtain political results, not only to “raise awareness,” but also to reach the heart of perhaps that woman, or that woman there, who may be thinking about abortion and who, seeing this march which clearly affirms that abortion is a crime, would abandon her evil project and save her child.

It is also a way to pray publicly and in the street to make reparation for the flood tide of sin. It is important to do this here, in Japan, a country which has so few real Masses, and so few public processions. Christianity in Japan has never been more than a tiny minority anyway, but today even that is faltering. Japan is under the sway of a conciliar Catholic Church more revolutionary than the politicians. Politics is certainly corrupt here, but not yet too actively ideological. Even this does not prevent all the bad laws from passing. So, the conciliar Church in Japan does nothing to stand in the way of the evil that government would do. If anything, it is the other way around.

The legalization of murder, quasi-mass human sacrifices under the sanction of law, make our era the most monstrous that the earth has ever seen.

In France, in all western countries, every Catholic should defend life and militate to abolish abortion and penalize it. The fight for civilization begins there, the restoration begins there. In his time, the Duke of Anjou, grandfather of Louis XX and so heir of the Bourbon Dynasty, had already publicly denounced the so-called Veil law allowing abortion, before its vote, in 1973.

Yes, at that time, the Legitimists and the traditional Catholics, the king above all, knew where the fight was.

But since then, the generalization of slaughter, the legalization of murder, quasi-mass human sacrifices under the sanction of law, make our era the most monstrous that the earth has ever seen. The blood flows less freely than on the Mayan pyramids, and so men do not stop and suppress a wave of nausea and think, “Dear God, this is barbaric” as easily as if the killing were being done out in the open. All the same, this way of killing in an aseptic way, this velvet lie of saying that we actually do not kill, this way of speaking of murder as therapeutic, only increases the horror of this world revolution, of this re-paganization that our age calls “modernity” and “progress.”

So let us fight in an integral way! Let us join one another and reclaim our humanity by fighting in defense of the humanity of our brothers and sisters in the womb.

And may Our Lady of Fatima intercede for the salvation of souls, innocent lives, and the conversion of sinners!

All Catholic brothers and sisters in America, please pray for the conversion of Japan, and for the reign of Christ!

We will celebrate next year the tenth year of the March for life in Japan. So we plan to make it big. It will be the opportunity to organize an international symposium, such as we did in 2019, when Michael Matt joined us all the way from America to be in solidarity with us at the March for Life. The theme will, as then, be Counter-Revolution.

All Catholic brothers and sisters in America, please pray for the conversion of Japan, and for the reign of Christ! We hope that we will have the joy to have you with us, through prayer or in person, at next year’s March for Life in Tokyo!

For God, for the King, for France!

Latest from RTV —TWO YEARS LATER: Davos and the Plot to Cancel Trump

[Comment Guidelines - Click to view]
The Remnant values the comments and input of our visitors. It’s no secret, however, that trolls exist, and trolls can do a lot of damage to a brand. Therefore, our comments are heavily monitored 24/7 by Remnant moderators around the country.  They have been instructed to remove demeaning, hostile, needlessly combative, racist, Christophobic comments, and streams not related to the storyline. Multiple comments from one person under a story are also discouraged. Capitalized sentences or comments will be removed (Internet shouting).
The Remnant comments sections are not designed for frequent personal blogging, on-going debates or theological or other disputes between commenters. Please understand that we pay our writers to defend The Remnant’s editorial positions. We thus acknowledge no moral obligation whatsoever to allow anyone and everyone to try to undermine our editorial policy and create a general nuisance on our website.  Therefore, Remnant moderators reserve the right to edit or remove comments, and comments do not necessarily represent the views of The Remnant.
back to top
Last modified on Friday, August 26, 2022
Tweet
More in this category: « The Conflict Between the West and Russia Is a Religious One VIGANÒ’S DECLARATION Regarding the scandalous declarations of Vincenzo Paglia on Law 194 »