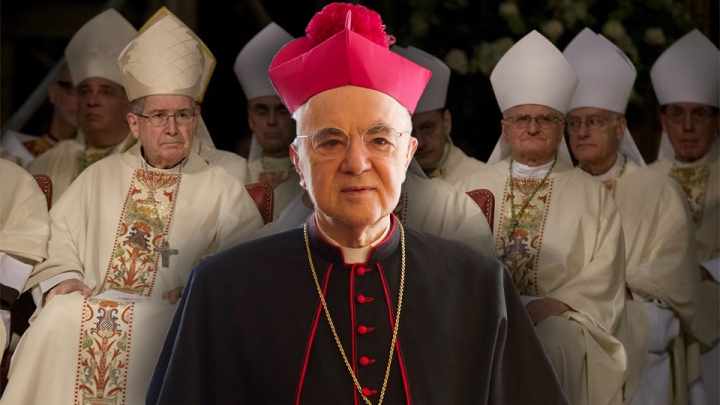 To my venerable Brothers in the Episcopate

In the glorious martyrs, Holy Church gives us an example of heroic virtues to imitate, showing us how the Grace of God assists those who love Him even to the point of facing torments and death. And while the wicked rage in vain against the bodies of the Martyrs in order to afflict their immortal souls, the Saints triumph with Christ precisely in witnessing to the primacy of Incarnate Truth over error, and of Immolated Charity over the seductions of the world. The palm of Martyrdom draws it sap from the wood of the Cross, and the crown of the Martyrs shines with the rays of the Redeeming Sacrifice of Our Lord.

Let us consider the example of the Πρόδρομος, the Forerunner, Saint John the Baptist, who preceded his Divine Master not only in announcing His Coming and the Baptism for the remission of sins, but also in facing death at the hand of the Tetrarch of Galilee, Herod Antipas, whom John admonished for the scandal that he gave to the people of Israel by keeping company in public concubinage with the wife of Herod the Great’s brother, Herodias. These events, documented by historians, are mentioned in the Gospel along with the role played by Salomé in asking her stepfather for the Baptist’s head. Saint Ambrose comments:

Ab adulteris justus occiditur, et a reis in judicem capitalis sceleris pœna convertitur. The just man is killed by adulterers, and the death sentence is pronounced by the guilty against their judge. Clauduntur lumina non tam mortis necessitate quam horrore luxuriæ: Baptist’s eyes closed not so much because of death but because of the horror of lust. Os aureum illud exsangue, cujus sententiam ferre non poteras, conticescit, et adhuc timetur: His golden mouth, now bloodless, whose sentence you Herod could not bear, grows silent, but yet you still feared it.

How can your voice be silent, dear brothers, in the face of the legitimization of adultery?

How can your voice be silent, dear brothers, in the face of the legitimization of adultery? Will you choose to make yourselves accomplices of those who bow to the spirit of the world and show obsequious deference to the powerful, going so far as to admit to the Eucharistic Table those who by their conduct violate the Commandments of God, despise the law of the Church and give scandal to the faithful? How much longer will you allow the sanctity of marriage and the witness of Saint John the Baptist to be trampled underfoot? How much longer will you ignore the words of Saint Ambrose, on whose Cathedra sits today a successor who winks at the concubinaries to make himself acceptable to the guests of the new Herod? (here and here)

The Forerunner was not afraid to raise his voice against Herod, facing death with the serene abandonment of the just to the will of God. Will you be afraid to preach the Word, to insist in season and out of season, to correct, to rebuke, to exhort with all patience and doctrine (2 Tim 4:2), when the errors and deceptions of Amoris Lætitia are inspired by Salomé more than by the Forerunner? when the author of Amoris Lætitia can at worst remove you from your Cathedra because of your fidelity to Christ? And even if you were to be brought before the courts, would you agree to renounce proclaiming Christ, and Christ crucified (1 Cor 2:2), in order to save your earthly life and lose eternal life?

Do not make the Passion of the Redeemer to have been in vain, for He shed his Most Precious Blood in order to save repentant sinners, not to confirm them in sin.

I exhort you, most beloved Brothers, you who are the Successors of the Apostles, Ministers of Christ and dispensers of the Mysteries of God (1 Cor 4:1), to consider your responsibility in supporting the doctrinal and moral deviations of those who abuse their role and authority to sow error, offend the Majesty of God, humiliate the Holy Church and lose souls. I exhort you, through the Wounds of Christ: awaken from your lethargy that makes you accomplices of a betrayal, for which you will have to give an account to the Just Judge on the day of your death. Consider that your silence takes away from the Glory of Heaven the souls entrusted to you by the Supreme Shepherd, to whom even the one who sits in Rome will one day answer. Do not make the Passion of the Redeemer to have been in vain, for He shed his Most Precious Blood in order to save repentant sinners, not to confirm them in sin.

The Lord asks you to be the guide of the Lord’s flock, using your Crosier to lead the sheep to the pastures of Heaven. Your destiny is to accompany them with Charity to the Eternal Glory for which they were created and redeemed, and not to precede them into the flames of hell.

Latest from RTV — ROTHSCHILD'S POPE and the League of Globalist Gentlemen

[Comment Guidelines - Click to view]
The Remnant values the comments and input of our visitors. It’s no secret, however, that trolls exist, and trolls can do a lot of damage to a brand. Therefore, our comments are heavily monitored 24/7 by Remnant moderators around the country.  They have been instructed to remove demeaning, hostile, needlessly combative, racist, Christophobic comments, and streams not related to the storyline. Multiple comments from one person under a story are also discouraged. Capitalized sentences or comments will be removed (Internet shouting).
The Remnant comments sections are not designed for frequent personal blogging, on-going debates or theological or other disputes between commenters. Please understand that we pay our writers to defend The Remnant’s editorial positions. We thus acknowledge no moral obligation whatsoever to allow anyone and everyone to try to undermine our editorial policy and create a general nuisance on our website.  Therefore, Remnant moderators reserve the right to edit or remove comments, and comments do not necessarily represent the views of The Remnant.
back to top
Last modified on Friday, September 2, 2022
Tweet