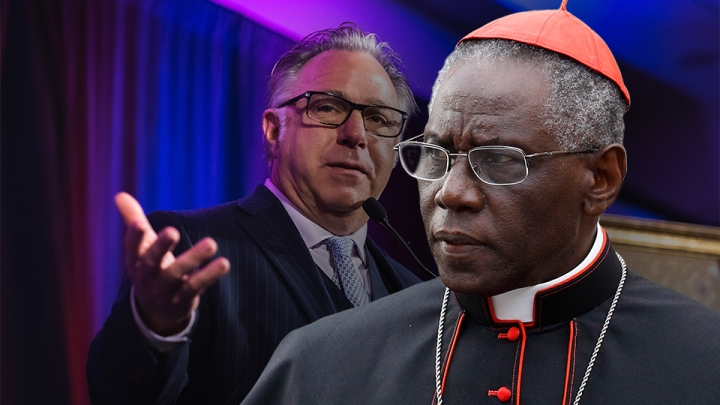 Next Saturday is the 40th anniversary of the French organization responsible for the Chartres Pilgrimage.

As part of that happy event, Cardinal Robert Sarah, former prefect of the Congregation for Divine Worship and the Discipline of the Sacraments, was supposed to celebrate the Traditional Latin Mass in the Church of Saint-Roch in Paris.

Incredibly, the Archbishop of Paris, Laurent Bernard Marie Ulrich, has decided to cancel Cardinal Sarah, prohibiting him from offering that important anniversary Mass in Paris.

And why was Cardinal Sarah canceled? I believe it is because the mainstream Church is becoming increasingly concerned over the success of the Chartres Pilgrimage – the most powerful international statement in favor of Traditional Catholic restoration in the world today.

To understand more fully what I mean by this, please watch this documentary.

As the children of darkness seek to crush the last vestiges of the Light of Christ in our civilization, the children of Light unite by the tens of thousands every year on the Pentecost Pilgrimage from Paris to Chartres, France, where they make a promise to remain faithful to Christ and to the old world order of Christendom despite the rise of a new and diabolical world order.

Like so many hundreds of thousands, I too have been profoundly impacted by this singular event, which is why I am so happy to release this documentary on the Pilgrimage and the youth movement it represents.

Especially after "Traditionis Custodes," the Pilgrimage to Chartres must be held up against the folly of any force on earth attempting to cancel the Latin Mass which represents the hope and promise of the future.

For God’s sake and the sake of your children and your nation, please share this video today!

Pope Francis will not be happy if "Guardian of Tradition" goes viral, but I suspect God will be pleased, and so let’s do it!

I call on Catholics and non-Catholics alike to ‘make Francis’s day’ by sharing this video with everyone you know. There truly is not a moment to lose!

P.S. Per usual, this video is also posted at Remnant-TV.com. However, in the interest of a more mainstream impact, we are making an exception in this case and asking you to please share the YouTube link to this documentary.

[Comment Guidelines - Click to view]
The Remnant values the comments and input of our visitors. It’s no secret, however, that trolls exist, and trolls can do a lot of damage to a brand. Therefore, our comments are heavily monitored 24/7 by Remnant moderators around the country.  They have been instructed to remove demeaning, hostile, needlessly combative, racist, Christophobic comments, and streams not related to the storyline. Multiple comments from one person under a story are also discouraged. Capitalized sentences or comments will be removed (Internet shouting).
The Remnant comments sections are not designed for frequent personal blogging, on-going debates or theological or other disputes between commenters. Please understand that we pay our writers to defend The Remnant’s editorial positions. We thus acknowledge no moral obligation whatsoever to allow anyone and everyone to try to undermine our editorial policy and create a general nuisance on our website.  Therefore, Remnant moderators reserve the right to edit or remove comments, and comments do not necessarily represent the views of The Remnant.
back to top
Last modified on Thursday, October 6, 2022
Tweet

More in this category: « A Snapshot of the Church before Vatican II: How Today’s Crisis Cures the Pre-Conciliar Ills Our Lady of the Rosary: Hope of the World »