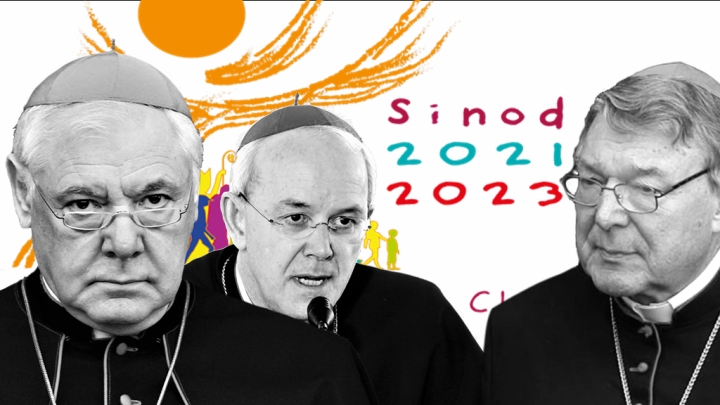 “The 2023 Synod is shaping up into hostile takeover of the Church. If they succeed, it will be the end of the Catholic Church.”
~Cardinal Gerhard Müller World Over EWTN, October 6, 2022

“The synodal process has begun disastrously in Germany, and matters will become worse unless we soon have effective papal corrections on, for instance, Christian sexual morality, women priests, etc…some faithful German Catholics are already talking, not of the synodal way, but the suicidal way.”
~Cardinal Pell  October 13, 2022

“The synodal process is being manipulated in the hands of high ranking Vatican officials to push their ideological agenda. Many bishops are concerned that there is a pre-established agenda in Rome. This process is a tool to coverup a pre-established agenda and we have to be very concerned.”
~Bishop Athanasius Schneider  October 22, 2022 World Over

The Great Reset of the Catholic Church is underway. The venue is not Davos, but rather the Vatican. By cunning and manipulation, the globalists seized power in 2013 by installing their St. Gallen candidate. At long last, Bergoglio’s raison d’être is about to materialize with the transformation of 2000 years of  Magisterium and dogma.

The stage is set at the Vatican.  Make no mistake-the Synod on Synodality is the mechanism and catalyst to radically transform the 2000 year Magisterium of the Catholic Church. Accordingly, Bergoglio appointed the most radical of German prelates to oversee the Synod.This is no coincidence. These German prelates have long advocated for radical change in Church moral teaching.

The enemies of the Catholic Church—New World Order elites—preordained that the Church will eventually submit to secular powers of the Great Reset lords.

In the 1960s, mass media theorist Marshall McLuhan understood that the “medium is the message.”

The message embedded in the synodal documents couldn’t be more obvious and radical.  Synodal reports are arrayed with images of rainbows, hippies in gay pride shirts and women in chasubles. Welcome to Woodstock on the Tiber—the reboot of the Catholic Church.

Preliminary documents here and here suggest that the Synod should be more aptly titled, the Sinod on Sinodality—where sin will be normalized and dogmatized. The Catholic world was warned about this day. Recall the celebratory words of Grand Master Gustavo Raffi, head of the Italian Freemasons upon Bergoglio’s election:

"With Pope Francis, nothing will be more as it was before. It is a clear choice of fraternity for a Church of dialogue, which is not contaminated by the logic and temptations of temporal power…Our hope is that the pontificate of Francis, the Pope who 'comes from the end of the world' can mark the return to the Church-Word instead of the Church-Institution, promoting an open dialogue with the contemporary world, with believers and non-believers, following the springtime of Vatican II."

It’s time for the papal blinders to come off, Catholics.

The enemies of the Catholic Church—New World Order elites—preordained that the Church will eventually submit to secular powers of the Great Reset lords. In nine years, Bergoglio delivered the Catholic Church as a willing partner to its global masters. Accordingly, Bergoglio ceded Vatican power to the China Communist Party, the World Economic Forum and the United Nations.

Will Catholics fight to maintain and restore the moral dogma in the Catholic Church? Or will they submit to the tyranny of the pope of the new world order?

Cardinals Pell and Müller and Bishop Schneider are urgently sounding the alarm, warning Catholics that the synodal process has been hijacked by radicals with the express purpose to expropriate 2000 years of Catholic moral dogma and subvert with a radical modernist agenda.  By elevating the vapid process of a listening tour of inclusivity, synodal fathers are sacralizing dialogue above dogma.

A doctrinal earthquake is about to explode under the guise of a manipulated papal poll, hell bent on transforming eucharistic processions into pride parades, sacraments into sacrileges, and theology into ecology.

Will Catholics fight to maintain and restore the moral dogma in the Catholic Church? Or will they submit to the tyranny of the pope of the new world order?

Are faithful Catholics fed up with the incessant and vicious gaslighting by Bergoglio?

Will Catholics roundly resist his modernistic manifestos disguised and peddled in the name of mercy, inclusion, dialogue and listening?

As predicted, the Belgian, German and Flemish Bishop Conferences compiled and submitted their synodal syntheses to the Vatican. The European bishop conferences seek recognition of women priests and homosexual marriage, as well as communion for divorce and remarried. The Bergoglio Church of “who am I to judge” is reignited from the ashes of the burned-out hull of Catholic Europe.

The USCCB submitted its whiny, sophomoric and trite synodal report generated from its “listening sessions” flush with astonishing euphemistic ambiguity hinting at radical changes in moral dogma. Here’s one of many examples:

“The hope for a welcoming Church expressed itself clearly with the desire to accompany with authenticity LGBTQ+ persons and their families. Many “who identify as LGBTQ+ believe they are condemned by Church teachings.” There is “an urgent need for guidance as [one parish] begged, ‘we believe we are approaching a real crisis in how to minister to the LGBTQ+ community, some of whom are members of our own families. We need help, support, and clarity.’” Often families “feel torn between remaining in the church and supporting their loved ones.”In order to become a more welcoming Church there is a deep need for ongoing discernment of the whole Church on how best to accompany our LGBTQ+ brothers and sisters.”

Does this mean that Churches will now bless homosexual marriages?

Does this mean that Churches will now bless homosexual marriages? Will the rainbow pride flag will be flown in Catholic churches as an homage to the late Cardinal Bernardin?

Does this synodal report mean that homilies will promote homosexuality so that the LGBTQ+ community will feel welcomed and supported, like a parish in the Chicago Archdiocese on Father’s Day 2022.

Open wide the church doors for Trannies and Drag Queens? 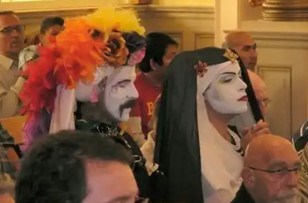 As for the “T” in LGBTQ+, will Catholic Churches, schools, and facilities welcome and promote Trans Drag Queen shows in the name of inclusivity and accompaniment?

How will the Synod on Synodality advise on Catholic school curriculum? Does Bergoglian mercy demand an LGBT+ friendly curriculum to replace the “rigid” Catechism of the Catholic Church? 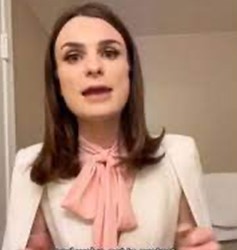 Dylan Mulvaney, a man "transitioning" to a woman...

Will Drag Queens welcomed at mass to perform in their flamboyant costumes in the name of the synodal fathers’ BIG Tent?

Will the TikTok Trans celebs, like Dylan Mulvaney, be invited to address the synodal fathers and Francis, as he was at the White House with “catholic” Joe Biden?

How will the synodal bishops address the ever expanding perverse plus: “+” category in the LGBTQ+ community?  The latest tally of gender ideation species reaches 112 genders variations with a sordid array of sexual fetishes and prurient  preferences.The number of  +++ genders grow every day. Will they be included or excluded in the synodal sexual preference grab bag?

The Great Reset of the Catholic Church brought to you by Jorge Mario Bergoglio will be unveiled at the 2023 Sinod on Sinodality.

Will the synodal fathers in the name of the inclusive “tent” bless polygamy “marriages?”

Will there be an x-rated working group discussion and listening session at the Vatican synod on zoophilia or coprophagia? Wonder which prelates will preside over that discussion?

Grab your rosaries, Catholics. You’ve been forewarned. It’s now or never. We must resist this Sinod with all our might.

The Great Reset of the Catholic Church brought to you by Jorge Mario Bergoglio will be unveiled at the 2023 Sinod on Sinodality.
_______________

Elizabeth Yore is an international child advocate attorney. She is a regular guest on Steve Bannon’s WarRoom. She is a weekly panel member on the LifeSiteNews’ podcast, Faith and Reason.

Stay Tuned for Part II: The Working Document of the Synod on Synodality.

[Comment Guidelines - Click to view]
The Remnant values the comments and input of our visitors. It’s no secret, however, that trolls exist, and trolls can do a lot of damage to a brand. Therefore, our comments are heavily monitored 24/7 by Remnant moderators around the country.  They have been instructed to remove demeaning, hostile, needlessly combative, racist, Christophobic comments, and streams not related to the storyline. Multiple comments from one person under a story are also discouraged. Capitalized sentences or comments will be removed (Internet shouting).
The Remnant comments sections are not designed for frequent personal blogging, on-going debates or theological or other disputes between commenters. Please understand that we pay our writers to defend The Remnant’s editorial positions. We thus acknowledge no moral obligation whatsoever to allow anyone and everyone to try to undermine our editorial policy and create a general nuisance on our website.  Therefore, Remnant moderators reserve the right to edit or remove comments, and comments do not necessarily represent the views of The Remnant.
back to top
Last modified on Friday, November 4, 2022
Tweet

More in this category: « Does “Pandemic Amnesty” Allow the Wrongdoers to Keep Lying and Killing? Viganò Blasts the Post-Conciliar Acceptance of Separation Between Church and State »