To Believe a Lie 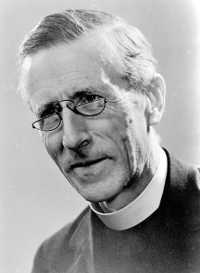 There is a shadow over the world. It darkens societies and snuffs the candles in the sanctuary. It creeps around corners and billows over houses. Good people see it, but they don’t know what to do. How do you fight a shadow? How do you crush a phantasm? There’s no substance there, nothing to push or shove. Nothing works.

So what is this strange amorphous thing, this Mystery of Iniquity? How can we understand it?

Sometimes, the most complex, inexplicable things are not so hard to understand once the blinders are off. I’m a counseling psychologist—no theologian or scientist—but, like all who hold the Catholic Faith, I have eyes to see. After nearly forty years of studying the human mind, analyzing the root of emotional conflict, moral perversions, and intellectual error, this is how it looks to me:

Quite simply, the darkness is the result of a thought process disorder. Masquerading as philosophy and science, the disorientation has spread through the Church from top to bottom, corrupting minds and shaking the intellectual and philosophical foundations of Western civilization.

A new religion has the world in its grip.

The closest thing to it was the fourth-century Arian crisis, when the whole world groaned and found itself Arian. But at least then people knew what the argument was. The point of debate was clear. It was one thing or the other: Was Christ the co-eternal Son of the Father or not?

But this Shadow is more than heresy. It is the reinterpretation of Truth—which is no interpretation at all, but a denial and repudiation. People say it is Modernism, but horrid as that synthesis of all heresies, is, the nebulous New Religion is worse because it’s not a heresy. Rather, it is systemic apostasy, a total renunciation of the Deposit of Faith, a “standing off” from Revelation. It is the substitution of a lie for the Truth. Like all evil things, it has no life of its own, but it has attached itself like a blood-sucking leech to the Mystical Body of Christ.

An historical perspective is in order here. The birth of the New Faith predates Vatican II by nearly fifty years. Materialism flattened the ground; naturalism destroyed the sense of awe and wonder. Modernism sowed the seeds of doubt.

It was all so mechanical and boring. There had to be something more. People were itching for change. Science was in the ascendency.

But so many didn’t. Although they wouldn’t admit it openly, they no longer believed in the truths of their religion. Theoretical science had brought them beyond the catechism and Creed. Misled by speculation, they became evolutionists.

They started right at the beginning. The first thing they denied was the existence of Adam and Eve. The “creation story,” as they call it, was too much to swallow. They refused to see the Omnipotent Hand of God in the creation of one man and one woman, from whom all people would be born.[1]

Following the materialists, they clung instead to the grotesquerie of man’s upward ascent from the ape in a progression of hideous creatures of their own imagination. They declared that some family of apes called hylobatidae split into hominidae—as if that explained anything at all. They came up with neo-Latin names to deceive and impress: Australopithecus, Homo erectus, Homo Heidelbergensis, Homo rhodesiensis, Homo denisova, and finally, the familiar, Homo neanderthalenis—the Neanderthal.

They presented those creatures of their imagination as scientific fact. It didn’t matter that they had no more ‘evidence’ than a jawbone here, a skull, there, and various bone fragments that they labelled and pronounced pre-human.

They spun their fairy tales from fossils and taught polygenesis as truth.

But look what happens when you start with a false premise. The logic can be unassailable, but the conclusions are still false. The lie grows more blatant and the thought disorder more severe with every assertion. Let’s follow the line of reasoning in the usual if…then…form.

It was pretty bleak, no religion at all. They needed to come up with a new spirituality, a new theology, fit for the superior post-modern mind. Something to fill the emptiness. They believed themselves Christians, after all. There was such a thing as spirit. It just had to be reinterpreted and made new again.

It didn’t take them long to find a champion.

He was Fr. Teilhard de Chardin, the Jesuit priest-paleontologist. In 1917, he wrote Le prêtre, (The Priest), laying the theological foundation of a substitute faith. The New Religion has one principal doctrine, from which all his errors flow: The universe is evolving from matter to Humanity and Humanity is evolving into Christ.

The book wasn’t published. His superiors forbade it, but mimeographed copies circulated among the intelligentsia, taking hold of jaded minds, minds tired of the Reality of the Catholic Faith, bored with her teaching, disdainful of the certainty of her pronouncements.

The pedants loved the new ideas. They were thrilled with the “new spirituality.” Subsequently, everything would be examined through this distorted lens. Nothing would, could ever be the same again.

A new spirit, born of speculative evolutionism and the worship of science, had been let loose. The underground circulation continued unabated. Teilhard died, but in 1957, another of his books, Le phénomène humain, was published in France. It was more deeply philosophical, more tendentious in its assertions

Three years later, in 1960, all hell broke loose. The English edition of The Phenomenon of Man, was published, followed by The Divine Milieu.

The ideas he developed were bizarre. There were all sorts of strange new words like noetic and noosophere, anthropogenesis and hominization. To Teilhard, there was no separate supernatural realm. Everyone and everything were involved in the “transformation of consciousness.”

Listen to his words on the nature of Nature: It is a “benevolent universe evolving in the unconditional love of a benevolent and all-forgiving God.”

So God sets no conditions?[2] He forgives everything and everybody? Both here and in Eternity? Does He not judge?

I read closer. How can the universe be benevolent?

For this the Teilhardians have an answer. It’s not just matter, you see. Not at all. There is no distinction between matter and spirit. The universe is alive, evolving, transforming until someday, the whole beautiful thing will be Christ.

Come on. Are these people serious? Rocks and minerals and inert gasses are going to be Christ?

They go on. The living universe will be divinized. We will all together, not singly, not individually, but indivisibly reach the Omega Point.

And what is that?

Not Jesus of Nazareth. Oh, no. The Cosmic Christ. Christ is huge, they say. He is a continually evolving being as big as the universe.

There was no condemnation from Rome. The Monitum disappeared. Teilhard slipped by the authorities by writing as a “scientist,” and not a theologian or even a philosopher. It was like Galileo all over again, and I guess they didn’t want to look stupid in the eyes of the world.

So the ideas spread. The Spirit of Darkness flew over the Vatican.

It was a new philosophy, a new religion for intellectuals, those tired of doctrine and rules, those who sought the transformation of humanity. Like some sort of mystical avatar pointing the way to divinization, they prided themselves on being forerunners of a New Creation.

Lest anyone notice and protest, Henri (Cardinal!) de Lubac reassured the devotees: “We need not concern ourselves with a number of detractors of Teilhard in whom emotion has blurred intelligence.”

So, people, protest all you want, you’re not thinking rationally. You’ve been overcome by emotion. You’re just dumb.

The Teilhardians pushed on. In 2009, Vatican spokesman, Fr. Federico Lombardi, was reported to have said with obvious satisfaction, if not triumphant glee: “By now, no one would dream of saying that Teilhard is a heterodox author who shouldn’t be studied.”

Sorry, Father. I not only dream of saying it, I will shout it from the housetops. Teilhard de Chardin is not just “heterodox.” He has undermined Catholic philosophy and theology. He is not some misunderstood paleontologist, nor is he a doctor of the Church on the level of St. Thomas Aquinas as some boldly profess.

Not at all. This Jesuit—exiled for a time to China and forbidden to publish by superiors who still professed the Catholic Faith—is an arch-heresiarch, the founder of a false religion, spiritual father of the New Age.

There’s no “hermeneutics of continuity” here. His are the lies beneath the ambiguities which plague us now.

Teilhard teaches that the universe is becoming Christ. The apostasy is blatant. The diabolical disorientation is manifest. The air is torn with the cry of the Serpent who proclaims again what he promised Eve in the Garden of Eden: Ye shall be as gods.

But he can roar all he wants. We won’t listen.

As St. Paul tells us: “Therefore God shall send them the operation of error, to believe lying, that all may be judged who have not believed the truth but have consented to iniquity. But we ought to give thanks to God always for you, brethren, beloved of God, for that God hath chosen you first fruits unto salvation, in sanctification of the spirit and truth.”[3]

And now we also have the promise of the Blessed Mother: But in the end, my Immaculate Heart will triumph…

Make no mistake, God will have the last word.

[1] Recent research has demonstrated that all human beings descend from one mother. And the truth is right there in the book of Genesis: Eve’s name means, after all, the Mother of the All the Living. But that’s another article.

[2] It sounds like the concept of “unconditional positive regard” developed later by Carl Rogers, father of the Humanistic School of Psychology.

Published in Remnant Articles
back to top
Last modified on Tuesday, June 17, 2014
Tweet
More in this category: « The Remnant on Pilgrimage in France (Chartres 2014) Who Are the Real "Christian Ideologues"? »