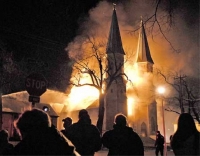 It was Joseph Goebbels, master Nazi propagandist and a trusted confidant of Hitler, who is credited with The Big Lie:

If you tell a lie big enough and keep repeating it people will eventually come to believe it. The lie can be maintained only for such time as the State can shield the people from the political, economic and/or military consequences of the lie. It thus becomes vitally important for the State to use all of its powers to repress dissent, for the truth is the mortal enemy of the lie, and thus by extension, the truth is the greatest enemy of the State.

If you tell a lie big enough and keep repeating it the faithful will eventually come to believe it. The lie can be maintained only for such time as Modernists can shield the faithful from the theological, liturgical and moral consequences of the lie. It thus becomes vitally important for Modernists to use all of their powers to repress dissent, for the truth is the mortal enemy of the lie, and thus by extension, the truth is the greatest enemy of Modernism.

The success of the Modernist Big Lie is evident not only in the fact that they have been able to continue the lie for half a century but that so many of the faithful continue to believe the lie, despite all evidence to the contrary. Ironically, many Neo-Catholics not only defend vigorously The Big Lie but seem willing to suffer shamefully for it at great cost, even to the point of shedding blood—of traditionalists! The Modernists have a name for their particular Big Lie: New Springtime.

Examples of the New Springtime Lie abound and have been exposed by The Remnant and other credible sources. But no matter how many the examples and how egregious, many of the faithful continue to buy the New Springtime Lie (NSL). Priests and religious have abandoned their vocations: NSL; Catholic schools and hospitals have been closed: NSL; clergy commit child abuse and the bishops cover it up: NSL; countless Catholics practice contraception but not the Faith: NSL.

But lies have consequences and big lies have big consequences. Remember the accusatory chant that children often sing to playmates when caught in a lie: “Liar, liar, your pants are on fire!” This expression is a paraphrase of an early nineteenth century English poem titled, “The Liar” by William Blake. Two stanzas of this poem are particularly apropos to the NSL:

Deceiver, dissemble, your trousers are alight; from what pole or gallows, do they dangle in the night? What infernal serpent, has lent you his forked tongue? From what pit of foul deceit, are all these whoppers sprung?

Unfortunately it is not the pants of the Modernist liars that are on fire but the Church Militant herself which is being scorched by the flames of hell and choked by the smoke of Satan. Quite literally, first in Europe and now in the United States, Houses of God are being sold off and turned into Temples of Satan. Churches are becoming mosques. In France, once known as the Eldest Daughter of the Church, Islam now surpasses Catholicism as the major religion there: NSL.

Among the more recent examples of these sacrilegious sales occasioned by the New Springtime Lie is a traditionally styled, still intact church founded more than a century ago in an American diocese all too typical today. Reliable sources report in the blogosphere and elsewhere that this once vibrant church that was recently merged with a modernist parish and then closed will soon be sold to Moslems for use as an Islamic worship center and a residence for an imam. It’s a win-win for the enemies: money for Modernists and a center for Moslems, not to mention one less traditional church: NSL.

The last presiding pastor of this church did his very best to preserve the House of God and advance the cause of tradition. He suggested to the bishop that the church become exclusively Tridentine, to serve the needs of traditionalists in the area. He even offered to continue there as pastor, foregoing his meager priest salary and food allowance. But not even that was enough to persuade the ecclesiastical powerbrokers. Instead, another House of God will now become a Temple of Satan. Already the prominent steeple cross of the church has been torn down and dumped in a dumpster. The Moslem buyers have issued a fatwa that all religious symbols within the church must be removed, including stained glass windows: NSL.

What bitter irony: whereas in the Middle East churches are blown up by Moslems, in the West they are bought out. Two means to the same end: bring down the Bride of Christ and bring in the prostitute of a prophet. That’s Old Testament type talk, by the way, in reference to a false religion or a faithless people. But that sort of insensitive language is abhorred by modern minds. Quite the opposite, Modernists are not bothered a bit by the buyouts and Neo-Catholics are in denial: NSL.

Worse yet, we have had two popes on the throne who have praised the Koran: one with a kiss and the other with words. And even now, as an Orthodox Christian mother sits in a squalid prison cell, condemned by an Islamic court, awaiting one hundred lashes for marrying a Christian and hanging by the neck for refusing to apostatize, no public word of criticism has yet been forthcoming from the Vatican or Bishop of Rome. Once her newborn child is weaned, she will hang: NSL.

We began with the Nazis and so we shall end. Bishop of Rome Francis stated recently that no miracle exists to support the canonization of Pope Pius XII. More likely the Vatican fears Jewish groups which claim—falsely—that the late pontiff did nothing to save Jews during World War II. As lamentable as that would be—if true—how much more reprehensible is the reality that certain popes since then have not only remained silent in the face of Moslem mayhem and murder but have even aided and abetted the spread and acceptance of this scourge upon the Church. And now, for the first time in human history, the Vatican welcomes within its walls the abominable prayers to Allah. Just tell us more New Springtime Lies!