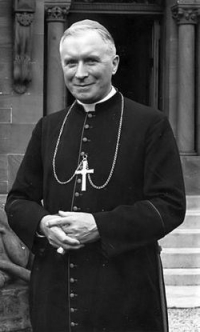 LIke Your Latin Mass? Thank God For This Man Then

It would seem that the reason for the small number of replies received is due to the difficulty in grasping these errors which are diffused everywhere. The seat of the evil lies chiefly in a literature which sows confusion in the mind by descriptions which are ambiguous and equivocal, but under the cloak of which one discovers a new religion.

I believe it my duty to put before you fully and clearly what is evident from my conversations with numerous bishops, priests and laymen in Europe and in Africa and which emerges also from what I have read in English and French territories.

I would willingly follow the order of the truths listed in your letter, but I venture to say that the present evil appears to be much more serious than the denial or calling in question of some truth of our faith. In these times it shows itself in an extreme confusion of ideas, in the breaking up of the Church's institutions, religious foundations, seminaries, Catholic schools - in short, of what has been the permanent support of the Church. It is nothing less than the logical continuation of the heresies and errors which have been undermining the Church in recent centuries, especially since the Liberalism of the last century which has striven at all costs to reconcile the Church with the ideas that led to the French Revolution.

It is our hope and prayer that you will subscribe to The Remnant and become part of the strongest journalistic voice in defense of traditional Catholicism in the United States today. Right now our e-edition (comes out every two weeks and is exactly the same as our print edition) is availble for just $25!

Order your e-subscription today and see what everyone is talking about!

The Remnant is fighting on the frontline every day, but we can't hold this ground without your help!

To the measure in which the Church has opposed these ideas, which run counter to sound philosophy and theology, she has made progress. On the other hand, any compromise with these subversive ideas has brought about an alignment of the Church with civil law with the attendant danger of enslaving her to civil society.

Thanks to this admirable vigilance, the Church grew firm and spread; conversions of pagans and Protestants were very numerous; heresy was completely routed; states accepted a more Catholic legislation.

Groups of religious imbued with these false ideas, however, succeeded in infiltrating them into Catholic Action and into the seminaries, thanks to a certain indulgence on the part of the bishops and the tolerance of certain Roman authorities. Soon it would be among such priests that the bishops would be chosen. This was the point at which the Council found itself while preparing, by preliminary commissions, to proclaim the truth in the face of such errors in order to banish them from the midst of the Church for a long time to come. This would have been the end of Protestantism and the beginning of a new and fruitful era for the Church.

Now this preparation was odiously rejected in order to make way for the gravest tragedy the Church has ever suffered. We have lived to see the marriage of the Catholic Church with Liberal ideas. It would be to deny the evidence, to be willfully blind, not to state courageously that the Council has allowed those who profess the errors and tendencies condemned by the Popes named above, legitimately to believe that their doctrines were approved and sanctioned.

Whereas the Council was preparing itself to be a shining light in today's world (if those pre-conciliar documents in which we find a solemn profession of safe doctrine with regard to today's problems, had been accepted), we can and we must unfortunately state that:

In a more or less general way, when the Council has introduced innovations, it has unsettled the certainty of truths taught by the authentic Magisterium of the Church as unquestionably belonging to the treasure of Tradition.

The transmission of the jurisdiction of the bishops, the two sources of Revelation, the inspiration of Scripture, the necessity of grace for justification, the necessity of Catholic baptism, the life of grace among heretics, schismatics and pagans, the ends of marriage, religious liberty, the last ends, etc. On all these fundamental points the traditional doctrine was clear and unanimously taught in Catholic universities. Now, numerous texts of the Council on these truths will henceforward permit doubt to be cast upon them.

The consequences of this have rapidly been drawn and applied in the life of the Church:

Pride has as its normal consequence the concupiscence of the eyes and the flesh. It is perhaps one of the most appalling signs of our age to see to what moral decadence the majority of Catholic publications have fallen. They speak without any restraint of sexuality, of birth control by every method, of the lawfulness of divorce, of mixed education, of flirtation, of dances as a necessary means of Christian upbringing, of the celibacy of the clergy, etc.

Doubts on the necessity of grace in order to be saved cause baptism to be held in low esteem, so that for the future it is to be put off until later, and occasion the neglect of the sacrament of Penance. Moreover, this is particularly an attitude of the clergy and not the faithful. It is the same with regard to the Real Presence: it is the clergy who act as though they no longer believe by hiding away the Blessed Sacrament, by suppressing all marks of respect towards the Sacred Species and all ceremonies in Its honor.

Doubts on the necessity of the Church, the sole source of salvation, on the Catholic Church as the only true religion, emanating from the declarations on ecumenism and religious liberty are destroying the authority of the Church's Magisterium. In fact, Rome is no longer the unique and necessary Magistra Veritatis.

Thus, driven to this by the facts, we are forced to conclude that the Council has encouraged, in an inconceivable manner, the spreading of Liberal errors. Faith, morals and ecclesiastical discipline are shaken to their foundations, fulfilling the predictions of all the Popes.

The destruction of the Church is advancing at a rapid pace. By giving an exaggerated authority to the episcopal conferences, the Sovereign Pontiff has rendered himself powerless. What painful lessons in one single year! Yet the Successor of Peter and he alone can save the Church.

Let the Holy Father surround himself with strong defenders of the faith: let him appoint them to the important dioceses. Let him by documents of outstanding importance proclaim the truth, search out error without fear of contradictions, without fear of schisms, without fear of calling in question the pastoral dispositions of the Council.

Let the Holy Father deign: to encourage the bishops to correct faith and morals, each individually in his respective diocese as it behooves every good pastor to uphold the courageous bishops, to urge them to reform their seminaries and to restore them to the study of St. Thomas; to encourage Superiors General to maintain in novitiates and communities the fundamental principles of all Christian asceticism, and above all, obedience; to encourage the development of Catholic schools, a press informed by sound doctrine, associations of Christian families; and finally, to rebuke the instigators of errors and reduce them to silence. The Wednesday allocutions cannot replace encyclicals, decrees and letters to the bishops.

Doubtless I am reckless in expressing myself in this manner! But it is with ardent love that I compose these lines, love of God's glory, love of Jesus, love of Mary, of the Church, of the Successor of Peter, Bishop of Rome, Vicar of Jesus Christ.

May the Holy Ghost, to Whom our Congregation is dedicated, deign to come to the assistance of the Pastor of the Universal Church. May Your Eminence deign to accept the assurance of my most respectful devotion in Our Lord.

Marcel Lefebvre,
Titular Archbishop of Synnada in Phrygia,
Superior General of the Congregation of the Holy Ghost

Published in Remnant Articles
back to top
Last modified on Friday, August 1, 2014
Tweet
More in this category: « Revolution in the Home: The Marxist Theory of the Family Religious Liberty for All…Except Satanists? »