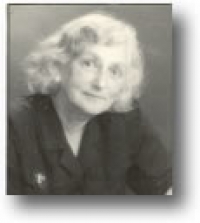 The writings of Mrs. Hertz (her Big Rock papers back in the 1960s, her articles in Triumph magazine, her Remnant column and her many books) fearlessly defend the traditional family, the traditional Catholic Mass and non-revisionist history of Christendom, while at all times remaining wholly centered on the spiritual life and the absolute necessity of prayer in the face of evil, especially the Rosary. She is thus the quintessential Catholic writer, and remains one of the most revered authors of her generation.

It is with a heavy heart, therefore, that I pass along the sad news that at this hour our old friend and ally is facing her last battle. Her family tell us it is very unlikely the 94-year-old Solange (“Nellie”) Hertz will be with us much longer, her fragile health having this week taken an ominous turn for the worse. After all that Mrs. Hertz has done for us over the long years of revolution in the Church, we are eager to beg prayers on her behalf during her struggle with heart failure and stage 4 cancer.

She is in hospice to reduce severe respiratory distress and pain. According to her daughter Tina Hertz Evans, even despite her suffering the one thing that is “still firmly intact is the sense of humor”, which for those privileged to know and love Mrs. Hertz comes as absolutely no surprise.

Please pray for this great Catholic champion of the old Faith, who never gave up the fight and who exemplified what it means to live a truly Catholic life even in the midst of turmoil and revolution in the Church. She is a true Catholic counterrevolutionary in that she never attempted to “do it her way” by advocating anyone start his own Church, elect his own pope, or bash away at wayward hierarchs at will, but instead chose to watch and pray with the Crucified at the foot of the Cross, fearlessly defending His Church all the while.

We are still publishing and republishing reprints of the words of wisdom, hope and warning penned by the oftentimes prophetic Mrs. Hertz, and we will continue to do so for as long as The Remnant continues going to press every two weeks. We will never forget the debt of gratitude owed to our old and beloved friend.

Please, in your charity, pray for Mrs. Hertz and her family during this time of suffering and need.

Published in Remnant Articles
back to top
Last modified on Thursday, August 21, 2014
Tweet

More in this category: « A Pope for All Seasons Stop the Synod! (An Online Petition) »