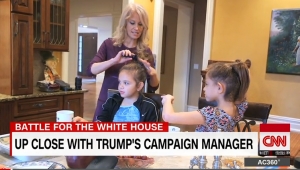 As President-elect Donald Trump's campaign manager, Mrs. Kellyanne Conway helped pull off one of the most stunning political victories in U.S. history. So, why do the feminists hate her? Why isn't she being praised as a feminist icon by CNN or the gals from The View? Could it be because Kellyanne Conway is outspokenly pro-life?

And here's another hopeful sign:  President Donald Trump's top advisor will be an Irish-American, happily married Catholic mother of four who makes breakfast every morning for her kids and then goes to Mass. She's a daily communicant!