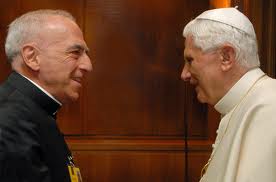 “giving witness to the truth involves the abandonment of friends, betrayal and death”

As the debate on the exhortation "Amoris Laetitia" is raging on, Msgr. Nicola Bux has kindly agreed to share some comments on the present state of affairs, especially following the letter to the Pope by four cardinals seeking clarification on specific points of the above document. For those who may be not aware, theologian and Vatican liturgical consulter, Msgr. Nicola Bux, is also professor of sacramental theology and author of several books on the liturgy, including 2016’s Con i sacramenti non si scherza (The Sacraments Are Not a Joke).

Q. You are certainly following closely the story regarding the letter to Pope Francis by the four cardinal asking for a final clarification of certain aspects of the exhortation "Amoris Laetitia", which in their opinion are not so clear. What do you think?

Anti-Lepanto: Hiding Our Lady for Fear of the Moors

ROME -- Our Lord told his disciples that the proclamation of the Kingdom of God is highly likely to cause opposition, hostility and even persecution. Under these circumstances, Jesus said, “everyone who acknowledges me before men, I also will acknowledge before my Father who is in heaven; but whoever denies me before men, I also will deny before my Father who is in heaven” (Matthew 10:32-33). By extension, this concept may well apply not only to Our Lord, but also to Our Lady, the Virgin Mary: this is precisely the consideration which immediately comes to mind considering what happened on the 19-21 August weekend in Rimini during the annual meeting organized by Communion and Liberation (CL), when a statue of the Virgin Mary was covered by a cloth "to avoid clashes" and religious pictures removed because of the fear of Islamic extremists, as reported not only in il Giornale, but also in other national dailies portals, such as la Repubblica and il Tempo.

The first international pilgrimage Summorum Pontificum, since Pope Emeritus Benedict XVI’s motu proprio liberalized the celebration of the traditional Roman rite of the mass in 2007, took place in 2012. The idea was to thank him on the occasion of the 5th anniversary of its implementation and to mark the Year of Faith. Due to the success of this first edition, which was made possible by some concurrent key factors including the support of lay people from Italy, the then president of the FIUV (Foederatio Internationalis Una Voce, more commonly known as Una Voce), Leo Darroch, and a diocesan French priest, Fr. Claude Barthe, it has now become an annual event. We have approached its main international coordinator, Guillaume Ferluc, to know more about the general programme of its fourth edition, due to take place 22-25 October 2015 in Rome.

Q. Could you elaborate a bit on the main features of this year’s edition of the pilgrimage Summorum Pontificum?

(Norcia, Italy) A three-day pilgrimage “in the footsteps of St. Benedict, accompanied by the traditional liturgy, took place in Norcia in early July. It was the first initiative at the national level of a pilgrimage based on the Extraordinary Form of the Roman rite which was organized by the Italian national branch of the Summorum Pontificum International Coordination Committee CISP. It is true that there are already one-day pilgrimages according to the Extraordinary Form in Italy but only at the regional level, like the one to Our Lady of Oropa in northern Italy and others in Tuscany and Puglia respectively.

(Rome) In the month of January the traditional Roman calendar offers us two closely inter-related feast days: January 10th as the Feast of the Sacred Family and January 23rd as the Feast of the Espousal of the Virgin Mary with St Joseph. Although never on the general Calendar, the latter was kept by many religious orders, especially those with a particular devotion to the Virgin Mary, and on many local calendars.

In anticipation of the second feast at a later date, on Saturday, January 10th, Cardinal Raymond Leo Burke celebrated a Solemn Pontifical Mass at the in the Extraordinary Form at the Faldstool in the ancient splendid Basilica di San Nicola in Carcere at 11.00 am. The Mass was celebrated ad orientem, in respect to the altar, but versus populum, due to the particular altar position of this ancient Basilica centrally located near the Teatro Marcello in Rome and built into a pre-existing temple in the ancient Greek zone. Where there were fora for oil and vegetables and, most notably, once the ferocity of the pagans sacrificed to idols, today a large number of faithful attended the Holy Sacrifice of the Mass, to contemplate with tenderness and love Jesus who gives himself every day in His Body, Blood, Soul and Divinity under the species of the Eucharist.

It would seem quite fitting for the Third Summorum Pontificum Pilgrimage to Rome to field three senior Cardinals as main celebrants of the three extraordinary rite pontificals scheduled for late October: H.E. George Pell in the traditional parish church of Santissima Trinità dei Pellegrini on Friday, October 24th; H.E. Raymond L. Burke on Saturday, October 25th in St. Peter’s Basilica; and H.E. Walter Brandmüller on Sunday, October 26th, in the Benedictine community in Norcia on the feast of Christ the King, October’s last Sunday in the Tridentine calendar.

The unprecedented development on the occasion of this third traditional pilgrimage is the fact that the religious services will be ushered in H.E. George Cardinal Pell, generally regarded as the highest-ranking prelate in the Vatican after his appointment in February 2014 as the first Cardinal-Prefect of the newly created Secretariat for the Economy to oversee the Vatican finances. But the former archbishop of Melbourne and Sydney is also known for his sensitivity in favour of the traditional liturgy, which he himself celebrates from time to time.

Published in Remnant Articles
Tagged under
Read more...
Page 2 of 2