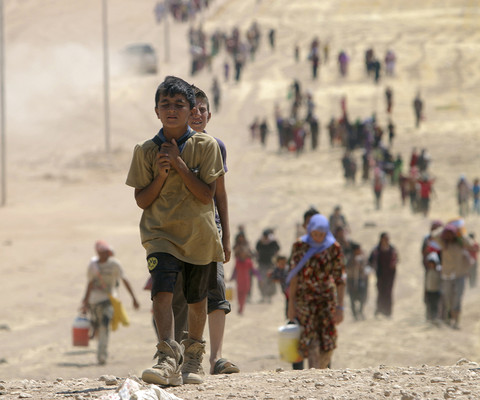 Catholics in Iraq have lost everything--their lives, their children, homes, businesses, personal effects, everything! Who's next?

Following the disastrous “gay marriage” decision of the Supreme Court in Obergefell v. Hodges, all informed faithful Catholics understand that the time of persecution has begun. We now fully expect the merciless hands of runaway secularism, both governmental and societal, to treat Christians with every cruelty possible. What they may not realize is that there are other forms of persecution and persecutors that may well come for faithful Catholics, one of which is a persecution by the Church itself.

By now, those of us paying attention know that, using the gay marriage decision as the tip of the spear, militant secularists, atheists, and statists will do everything they can to force Christians to capitulate to the depraved zeitgeist or be driven from public life. We know that government cannot invent rights without taking away other real rights; in this case, the right to the free exercise of our religion.

You know what? I get it. I really do get the outrage over a Minnesota dentist’s $50,000 vanity kill of Cecil the Lion. With elaborate measures in place for his protection, the dentist finished Cecil off with a rifle after ineptly wounding him with a compound bow, which left the animal bleeding for days as the intrepid hunter and his professional guides tracked it down. Then he hacked off the beast’s head so he could take it home and mount it in his study.

A fair fight, if you please! A man-versus-beast, put-your-life-on-the line, kill-or-be-killed sort of encounter with the wild. That is what we imagine big game hunting to be: an extreme sport for those who crave killing a beast that at least has a realistic chance of killing them (the mortally sinful nature of such daredevil sports aside). Or, more nobly, the defense of people against a predator on the loose in a human community. But not this mode of hunting: an elaborate Disney World-style thrill ride, the illusion of danger in a cocoon of safety with a moneyed vulgarian’s ultimate souvenir waiting at the end. Lured into the open with tasty bait, Cecil, a celebrity lion used to friendly relations with humans in the Zimbabwean wildlife preserve from which he was lured, walked cooperatively into the hands of his killers.

Cecil the Lion? How about Jivan the Human?

You know, there are times when I wish the real world were less like satire. I wrote the following fictional news piece as a joke with a friend, a fellow journalist, on Facebook as we were anticipating (still waiting, by the way) the official response from the USCCB on the ongoing revelations of the Planned Parenthood videos.

The appalling ghastliness of the videos revealing the world’s largest abortionist organisation’s baby-parts business, I felt, made the usual bland, boilerplate, bishopspeak rhetoric seem even more absurd and outrageous than usual. We were having a good (though somewhat grim) laugh, lowering, en-blanding and enfeebling the tone with each revision. Sorry if it seems an odd way of relaxing. Gallows humour is a well-documented phenomenon among journalists:

The Big, Mean, Nasty Dead Baby Pictures: What Good Can that Stuff Do? 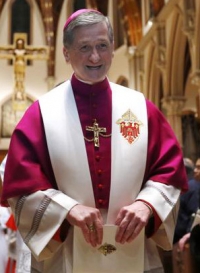 What do you think the Catholic Church, that great representation of Christ’s body on earth, in Chicagoland is up to these days?

If you guessed implementing and then bragging about implementing the EPA’s Energy Star program, you were right. Congratulations.

Chicago Archbishop Blase J. Cupich is juiced about all things global warming that are happening in and around the Catholic Church these days. Now I don’t mean to single out this man, because he is one of many with similar views, yet his Excellency has been public about his exhortations. In an op-ed to the ChicagoSun-Times he tells us how joyfully he looks forward “to benchmarking and tracking” the “energy, water, and emissions performance” of the facilities under his care.

Archbishop Cupich Gives Up the Ghost 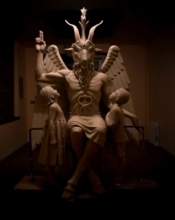 Dozens of Christian protesters gathered in Detroit, Michigan, on Saturday to denounce the unveiling of a bronze nine-foot, one-ton goat-headed statue of Satan called the Baphomet monument.

The statue was presented by the Satanic Temple, an organization "dedicated to Satanic practice and the promotion of Satanic rights," at an undisclosed location in the city as a security measure. The Satanic Temple kept the site of the unveiling of the huge statue secret, e-mailing the information only to members of the group and others who were previously given tickets to witness the occasion, according to Raw Story.

July 27, 2015, Fairfield, NJ - The American Catholic Lawyers Association announces its objection to the majority ruling in the case of  Obergefell v. Hodges regarding same-sex marriage.  Sodomy, as the Supreme Court itself observed in Bowers v. Hardwicke, before overruling itself a mere seventeen years later in Lawrence v. Texas, is immoral and perverse conduct that the U.S. Constitution was never intended to protect; and the Constitution is forbidden to transgress those aspects of the divine and natural law binding on all men and all nations. Nor was the Constitution ever intended to take away from the States the right to punish sodomy or to codify the truth of both divine and natural law that marriage is between one man and one woman. 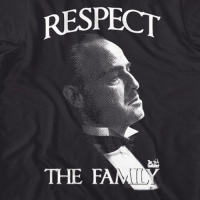 It would not be an overstatement to argue that virtually every neo-Catholic has a faulty understanding of marriage. The view of our Novus Ordo friends has been perpetuated by a hopefully faulty understanding of St. Pope John Paul’s Theology of the Body propagated by hopefully well-intentioned popularizers of the Polish pontiff’s thought. The notion among the JPII generation of Catholics is that marriage is a passionate, extremely sexualized union between a man and a woman who via NFP parcel out a fair sized bundle of kids. Oddly enough (or maybe not so oddly) this misconstrued view of marriage has weakened the Catholic response to the aggressive expansion of gay marriage. Arguing that marriage is a loving union between a man and woman who are “open to life,” neo-Catholics have unwittingly abetted the triumph of gay marriage in America.

The Godfather and the Almost Traditional Family

Have you noticed that gmarriage—government-defined marriage—is legal only in post-Christian nations? Why this is so in a moment, but first a brief review of where we stand.

The Netherlands were the first to pretend that two men (or two women) can be married, making it the law of the land in 2001. Belgium followed close at heel in 2003, with the flight from reality gaining momentum in 2005 with Canada and Spain. As of this writing, there are twenty-four countries mandating gmarriage, with Finland, Ireland, Mexico, and the United States the latest entries.

Several other countries are teetering, like Switzerland, Colombia, and Germany, and there is even growing support in traditionally non-Christian nations, like Taiwan and Thailand, but so far this is only tepid to modest.

Ever Wonder Why Gmarriage Is Only Legal in Post Christian Nations?

Editor’s Note: Whenever I hear it said that Catholic priests who continue to serve our war-torn Church from within the establishment are playing the part of the coward for not joining a traditionalist fraternity or society, my blood begins to boil. The following is the transcript of a sermon delivered a few weeks ago by a diocesan priest here in St. Paul. Father Echert has been providing daily Traditional Latin Masses in this archdiocese ever since 2007, and before that he opened his church willingly and enthusiastically to the TLM shortly after he was made pastor of the Church of St. Augustine in South St. Paul. A relatively young military chaplain who has served in Iraq and in various dangerous locations in the Mideast, Father’s courage seems to recognize no limits, unquestionably loyal to the Church but utterly unafraid to speak the truth no matter the personal costs. So the next time you’re tempted to claim that only priests trying to “save their skins” stay on and serve within our occupied Church, please remember Father Echert and the many good priests just like him who cannot find it within themselves to abandon their flocks to modernist priests during the present siege, and so have determined to stay on and hold the Catholic ground come what may. And as you read the following sermon, please consider the courage in the face of evil that is required of a priest first to deliver this sermon in the present climate and then to give the “rad-trad” Remnant permission to publish it. God bless you, Father! And, for what it’s worth, when they come for you, which now begins to seem almost inevitable, we’ve got your back!   Father Miguel Pro, pray for us and for our courageous priests. MJM


My Friends in Christ,

It has now been one week since the diabolical Supreme Court decision which now makes same-sex marriage a universal right for Americans. How ironic that in the days leading up to this national holiday that celebrates the Independence of the United States, the highest court in the land should abuse its power in such a blatant act against true human liberty and rights as determined by God.

None of us should be surprised by this ruling, as it is consistent with the sorts of legal determinations that have been made by this and other courts for decades, not only here in America but in many other nations and places as well.

Will You Die for Him? (A Sermon on the Eve of Persecution in America) 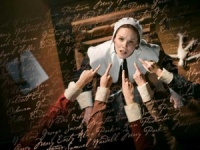 On this week’s Vortex, Michael Voris, possibly the most committed critic of the Society of St. X on the Internet today, informs his fans that:

"From the bogus visions of Medjugorje to the schismatic existence of the SSPX to the mad ramblings of dissidents in seminaries and Catholic universities, Rome rarely slaps down anything. And the problem is that as long as something isn't condemned, the followers or adherents of said issue can say, "Well, Rome hasn't said we're condemned, so we are okay.”

Michael Matt compares the rabid approach to the Society of St. Pius X on the part of CMTV to that of the very mainstream Catholic Herald this week, and asks one simple question: What is Michael Voris really up to? 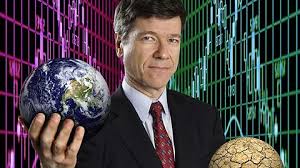 Pro-Abort Heading Back to the Vatican: The Shell Game of UN Sustainable Development Featured