Big Tech censors are blocking you from seeing the information you want. Sign up for Michael Matt’s eblast today, and never miss the content they are trying to keep from you. 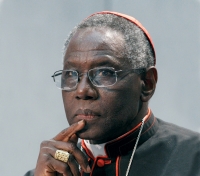 Robert Cardinal Sarah
The Vatican chief of the sacraments Cardinal Robert Sarah has spoken out against the profanation of the Holy Eucharist being proposed by some of the ruling fathers in the Vatican. His action comes on the heels of Pope Francis' recent suggestion that non-Catholics can receive Communion if they decide this is what they want to do. The pope told the congregation at the Lutheran Evangelical Church of Rome last Sunday that the question of whether or not a non-Catholic can receive Communion in the Catholic Church is one that "must be responded to on one’s own."

Cardinal Sarah, who is prefect for the Congregation of Divine Worship and the Discipline of the Sacraments, sharply disagrees, pointing out that there are divine laws forbidding the administration of Communion to non-Catholics or to baptized members living in mortal sin (i.e. adultery), so that should such a person petition the Catholic Church to receive Communion, the clergy "have no right to give him Communion."

Sarah also gives this warning concerning priests who would dare to administer Communion to non-Catholics: "If they do so, their sin will be more grave before the Lord. It would be unequivocally a premeditated complicity and profanation of the Most Holy Body and Blood of Jesus."

The prefect reminds us that not even the pope can change divine law on Communion. "The entire Church has always firmly held that one may not receive communion with the knowledge of being in a state of mortal sin, a principle recalled as definitive by John Paul II in his 2003 encyclical ‘Ecclesia de Eucharistia,'" he said. "Not even a pope can dispense from such a divine law."

Cardinal Sarah's words are most faithful and true. There is actually no doctrinal teaching that the pope can change. He can enact slight disciplinary changes, provided they keep firmly with tradition and do not slight doctrine, but to change a divine law or teaching is not something the pope or any bishop is authorized to do. Their authorization is to keep the law and pass it on to the people, just as Moses did at Mt. Sinai.

Sarah laments this is not being done. "I feel wounded in my heart as a bishop in witnessing such incomprehension of the Church’s definitive teaching on the part of my brother priests," he said. "I cannot allow myself to imagine as the cause of such confusion anything but the insufficiency of the formation of my confreres."

Not to mention, too, that Satan is reigning and ruling today in the Eternal City. The Blessed Virgin at Fatima warned how the enemy would infiltrate the Vatican hierarchy and bring about that time when it would be "bishop against bishop, cardinal against cardinal." Those days are now upon us, largely because the Fatima Third Secret was not released in 1960 as Our Lady requested be done. She was attempting to avert this disaster to the Church.

Now the members of Christ have to tough it out. The faithful have no recourse but to continue their fight for the truth, most especially by imitating Cardinal Sarah's example to be defenders of the Faith.

Cardinal Sarah's statements are taken from a forthcoming article to be published in the French Catholic magazine L’Homme Nouveau. Vatican insider Sandro Magister has published an excerpt in advance, for which we're indebted. For the complete story please go to the following link. BREAKING: Cardinal Sarah on Holy Communion for the...

Published in Headline News Articles
[Comment Guidelines - Click to view]
The Remnant values the comments and input of our visitors. It’s no secret, however, that trolls exist, and trolls can do a lot of damage to a brand. Therefore, our comments are heavily monitored 24/7 by Remnant moderators around the country.  They have been instructed to remove demeaning, hostile, needlessly combative, racist, Christophobic comments, and streams not related to the storyline. Multiple comments from one person under a story are also discouraged. Capitalized sentences or comments will be removed (Internet shouting).
The Remnant comments sections are not designed for frequent personal blogging, on-going debates or theological or other disputes between commenters. Please understand that we pay our writers to defend The Remnant’s editorial positions. We thus acknowledge no moral obligation whatsoever to allow anyone and everyone to try to undermine our editorial policy and create a general nuisance on our website.  Therefore, Remnant moderators reserve the right to edit or remove comments, and comments do not necessarily represent the views of The Remnant.
back to top
Last modified on Friday, November 20, 2015
Tweet

More in this category: « French Prime Minister: Attending Mass “Most Beautiful” Response to Terror Threat For Francis the Mundane: It's All About Dialogue and Climate Control »