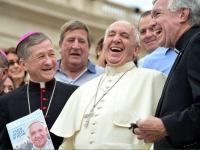 How Pope Francis can cleanse the far-right rot from the Catholic Church:  "Pope Francis needs to take tougher action against the United States’ most influential Catholic in Rome, Cardinal Raymond “Breitbart” Burke. The renegade cleric is not only undermining Francis’s reformist, compassionate papacy, and gospel teaching as it applies to refugees and Muslims, but the rebel prince of the church is also using his position within the walls of the Vatican to legitimize extremist forces that want to bring down Western liberal democracy, Stephen K. Bannon-style. Simply put, the Vatican is facing a political war between the modernizing Pope Francis and a conservative wing that wants to reassert white Christian dominance." READ MORE HERE

REMNANT COMMENT: The author of this Catholic-bashing rant is Emma-Kate Symons -- a Washington-based journalist and former Paris correspondent. Her work has been published in Foreign Policy, Women in the World in association with the New York Times, Quartz, the Atlantic, the Wall Street Journal and the Australian Financial Review.

In other words, she's a person of some influence. Mark well how she concludes her article: "If the pope doesn’t put the reactionary elements such as Burke and his cronies back in their place, they could force a real schism during his papacy and leave the church open to justifiable accusations that it failed to stand up to enablers of extremism and neo-fascism within its ranks."

"Extremism," "neo-fascism" and "white dominance" are terms not bandied about by journalists these days unless there is deliberate intent to vilify and intimidate a certain demographic. They immediately conjure up (at least in the minds of the undereducated) flickering black-and-white images of mass murderers on the History Channel -- e.g., Adolf Hitler, Joe Stalin, Pol Pot.  But surely when a “responsible” journalist employs such terms, it's not without good cause.  It can only mean that the person (or group) at whom such vitriol is directed must present a real threat to homeland security—someone that governments and police departments alike would be wise to monitor.

This inflammatory rhetoric (some might call it hate speech) is, ironically enough, the stock-in-trade of far-Left hate hunters. And, by and large, it works. And it's guaranteed to work in this case, when Francis comes blundering in with his weekly caricatures of faithful Catholics as "rigorists" and "extremists" in his own Church -- thus making the rhetoric seem that much more warranted.   "It must be true if the Pope thinks so too!"

In other words, Pope Francis is becoming key to the success of a radically anti-Catholic agenda.

The takeaway? Pope Francis is not merely a liberal-leaning pope with whom faithful Catholics are permitted to respectfully disagree. No, not anymore. His is the voice of reason against unreasonable Catholic “extremism” (read: orthodoxy). He’s the liberator who will rescue the modern world from a vengeful return of the Church of the Dark Ages, the Church of the Inquisition, the Church of a Repressive Moral Code that ushered millions into hopelessness and despair, lives cut short by Catholic Guilt.  And if you don’t go along with the Pope’s new and improved Church of Inclusion, Church of Accompaniment -- well, obviously, you’re a hater who wants people to die or at least live in misery.

If you're opposed to 'gay marriage,' for example, you have only a few years to publicly air those views. Francis is shifting the Church so far to the Left that those Catholics who do not go along with him (and, let’s face it, we're already to the point where Catholics are bound in conscience not to) will be easily vilified as "dangerous extremists", so filled with hate that even their own Church finds them deplorable.

You see how it works? This is no longer about a mere theological or philosophical divide in the Catholic Church, with progressives on one side and conservatives on the other. No, it's part of a purging, whereby radical Leftists will declare open season on faithful Catholics -- loners who have “broken away” from the Pope of Toleration in order to make common cause with the radicalized descendants of Tim McVey and Dave Koresh.

One little problem now, of course: 'Hate groups' were always and forever supposedly motivated by a paranoid anti-government fear factor -- the veritable meat and potatoes of "domestic terrorists". So with Donald Trump in the White House, the radical Left's go-to narrative becomes obsolete, and a new challenge presents itself: Link the "vast right-wing Christian conspiracy" to the White House this time around, and then condemn the entire "basket of deplorables" in one fell swoop.

It'll be interesting to see how this works out for them down the road. But, clearly, the Washington Post is trotting it out already with its paranoid call for Pope Francis  to crush some scaaaaaary Cardinal Burke-Steve Bannon cartel.  Depending on how this all plays out, Francis may turn out to be not only the most humble pope in history but also the most dangerous.

Perhaps this is why the Left is love-bombing him to death.

Published in Headline News Articles
[Comment Guidelines - Click to view]
The Remnant values the comments and input of our visitors. It’s no secret, however, that trolls exist, and trolls can do a lot of damage to a brand. Therefore, our comments are heavily monitored 24/7 by Remnant moderators around the country.  They have been instructed to remove demeaning, hostile, needlessly combative, racist, Christophobic comments, and streams not related to the storyline. Multiple comments from one person under a story are also discouraged. Capitalized sentences or comments will be removed (Internet shouting).
The Remnant comments sections are not designed for frequent personal blogging, on-going debates or theological or other disputes between commenters. Please understand that we pay our writers to defend The Remnant’s editorial positions. We thus acknowledge no moral obligation whatsoever to allow anyone and everyone to try to undermine our editorial policy and create a general nuisance on our website.  Therefore, Remnant moderators reserve the right to edit or remove comments, and comments do not necessarily represent the views of The Remnant.
back to top
Last modified on Saturday, February 11, 2017
Tweet

More in this category: « SNL and the Real Reason for the Hate Against Donald Trump Watch Your Back, Mr. Trump (Barry's Not Going Away) »