Watch Your Back, Mr. Trump (Barry's Not Going Away) 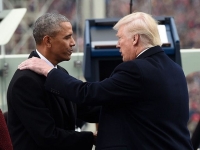 When former President Barack Obama said he was “heartened” by anti-Trump protests, he was sending a message of approval to his troops. Troops? Yes, Obama has an army of agitators — numbering more than 30,000 — who will fight his Republican successor at every turn of his historic presidency. And Obama will command them from a bunker less than two miles from the White House.

In what’s shaping up to be a highly unusual post-presidency, Obama isn’t just staying behind in Washington. He’s working behind the scenes to set up what will effectively be a shadow government to not only protect his threatened legacy, but to sabotage the incoming administration and its popular “America First” agenda.

He’s doing it through a network of leftist nonprofits led by Organizing for Action. Normally you’d expect an organization set up to support a politician and his agenda to close up shop after that candidate leaves office, but not Obama’s OFA. Rather, it’s gearing up for battle, with a growing war chest and more than 250 offices across the country.

Since Donald Trump’s election, this little-known but well-funded protesting arm has beefed up staff and ramped up recruitment of young liberal activists, declaring on its website, “We’re not backing down.” Determined to salvage Obama’s legacy, it’s drawing battle lines on immigration, ObamaCare, race relations and climate change. READ MORE HERE

REMNANT COMMENT: Isn't it fun to see just how dearly the liberals cherish the democratic process in this country?  I mean, once the 'people have spoken' through the sacred act of casting a vote, you can always count on the Ult-Left to blithely accept the outcome...as long as it goes their way.

It’s little wonder why the ballot box in this country, at least where the Left is concerned, has become nothing more than a suggestion box for the slaves. They don’t believe in democracy any more than they believe in God, and they hate the people they pretend to serve.

But of course Christian monarchy was tyrannical, nasty, evil, intolerant and just bad, bad, BAD!  What a joke!  There was no king in the entire history of Christendom who had even a small fraction of the absolute power wielded by Barack Obama over the past eight years. And now it looks as if he wants it back.

Have you subscribed to The Remnant yet? The February 15th Print/E-Edition hits the stands this week.

Published in Headline News Articles
[Comment Guidelines - Click to view]
The Remnant values the comments and input of our visitors. It’s no secret, however, that trolls exist, and trolls can do a lot of damage to a brand. Therefore, our comments are heavily monitored 24/7 by Remnant moderators around the country.  They have been instructed to remove demeaning, hostile, needlessly combative, racist, Christophobic comments, and streams not related to the storyline. Multiple comments from one person under a story are also discouraged. Capitalized sentences or comments will be removed (Internet shouting).
The Remnant comments sections are not designed for frequent personal blogging, on-going debates or theological or other disputes between commenters. Please understand that we pay our writers to defend The Remnant’s editorial positions. We thus acknowledge no moral obligation whatsoever to allow anyone and everyone to try to undermine our editorial policy and create a general nuisance on our website.  Therefore, Remnant moderators reserve the right to edit or remove comments, and comments do not necessarily represent the views of The Remnant.
back to top
Last modified on Monday, February 13, 2017
Tweet